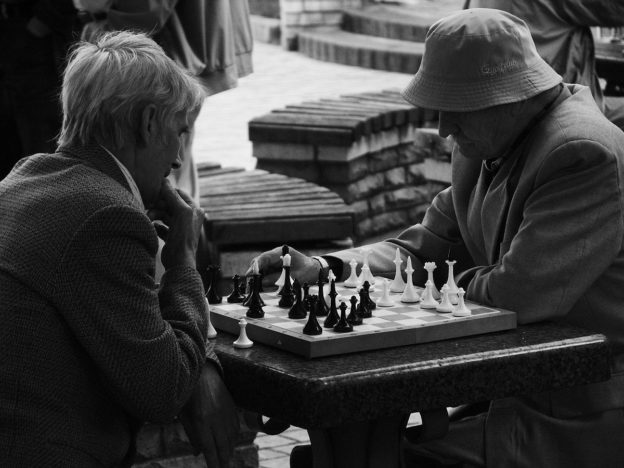 Image: “Chess players in a park in Kiev.” by Palefire~commonswiki. License: CC BY-SA 3.0

What is Selective Attention?

The process of selectively attending to information, such as the voice of a lecturer on an audio recording, while ignoring other noises in the environment, is called selective attention.

The brain cannot focus on all stimuli simultaneously. For example, if two stimuli are present in the environment at the same time, selective attention means the individual will focus on one while neglecting the other. If an individual perceives both stimuli, the response to both of them does not occur simultaneously, but in succession, one after the other.

When we selectively attend to something that involves perception, psychologists believe that our ability to perceive information improves, we are better in integrating this information, and finally, we can understand this new information more precisely.

The subject receives different auditory information from each ear:

Most of the information from the attended stimulus is retained while the other is lost.

When someone attends to a certain task, such as selectively attending to hearing the audio from a lecture, s/he decreases input from other sensory modalities, such as vision and touching. In reality, s/he does not alter the input but modulates how the brain processes the information from the other sensory modalities when trying to focus on a given modality of sensation.

The result is that an individual can decrease reaction time, improve judgment about what s/he is currently learning, and precisely perceive the new information of interest despite having a lot of noise. In this context, noise does not necessarily refer to actual sound; it refers to background information that the brain simply perceives as unimportant.

Of course, one might ask the question of whether we truly do something on the molecular and neurological level when we are selectively attending to something or is it just a perceived feeling with no physiological basis.

Neuroimaging studies of selective attention in visual or auditory tasks provided clear evidence that when we selectively attend to something, the sensory cortex responsible for that modality of perception, such as the occipital cortex in a visual task, shows increased activity, or at least modulated activity, compared to when we are not attending. These studies aim to study the effect of attention as a modulator of either brain activity in each area or as a modulator of brain networks.

Environmental inputs first enter a sensory buffer. One input is selected and filtered based on sensory modality. The information remaining in the buffers decays quickly and is lost. Select information enters short-term memory storage, where semantic tagging occurs.

This model suggests that the filter is replaced by an attenuator, which “rejects” the unattended sensory input instead of removing it. This model explains why we may able to access information thought to be unattended.

What is Divided Attention?

Another important definition to us has divided attention. Suppose you are hearing a lecture while browsing the internet and checking your Facebook account. This means that, at the same time, you are attending to two different tasks, i.e. multitasking, and each task involves a different sensory modality.

Interestingly, an average human is usually able to attend to both tasks while processing information and reaching decisions. This process is called divided attention. In other words, we can process and perceive information from two different sensory modalities because we can divide our attention.

While studying selective attention is easy for the neuroscientist, divided attention studies usually produce conflicting results. Depending on the sensory modalities involved, the difficulty of the task at hand, and the similarity between the two tasks, our ability to divide our attention can be different.

Usually, tasks that involve the same sensory modality, such as listening to a conversation while also listening to a lecture on audio, are more difficult to process at the same time.

Divided attention is, therefore, easier when the sensory modalities involved are different. For example, an individual listening to a conversation and understanding it while also eating a meal involves two different sensory modalities. However, these two tasks are much easier to process than incorporating two tasks involving visual and auditory perception. In other words, performing a task depends on the number of task-related stimuli. Listening to a conversation while eating are two unrelated tasks.

One of the easiest ways to study divided attention by neuroscientists is to study our ability to integrate information from two different modalities, such as visual and auditory perception tasks. One drawback of these experiments is that they involve working memory. Retrieving visual memory is usually faster than verbal memory; hence, integrating visual information may be faster and stronger than verbal information.

Effects of Selective Attention are Different Depending on the Sensory Modality

The final question regarding selective and divided attention was whether selectively attending to something will have different effects depending on the sensory modality involved.

Studies investigating selective attention in bi-sensorial experiments showed that our brains are more successful in processing visual, rather than auditory, information. It is important to note that selectively attending to a given modality in bi-sensorial experiments showed that our ability to integrate information afterward from both modalities is not affected. Our performance is more defined and precise in the case of processing visual performance by selective attention.

Sensory integration is defined as the brain’s ability to perceive sensory information from different modalities and then translate that into appropriate behavioral responses.

Conditions Where Selective Attention is Impaired

People with autism spectrum disorder are known to have attention abnormalities. Their ability to integrate information from different sensory modalities might be impaired, and selective attention is usually different in these people. For instance, they seem to have a higher ability to perceive and process visual information.

On the other hand, people with autism spectrum disorder are unable to selectively attend to a given task unless the complexity of the task is increased, i.e., the perceptual load has to increase to high levels before the person will ignore irrelevant detractors, while others can selectively attend to a given task even if the task complexity is low.

Patients with neurodegenerative diseases, such as Alzheimer’s disease and Parkinson’s disease, complain that their working memory, executive functioning, and visual selective attention are impaired.

The hippocampus and amygdala, in addition to deep brain areas, are thought to play important roles in visual selective attention. These areas are usually impaired in patients with dementia due to Alzheimer’s disease or Parkinson’s disease. Patients with these conditions might be unable to ignore distractors unless the complexity of the distractors and the given task are increased, again emphasizing the importance of perceptual load in selective attention.