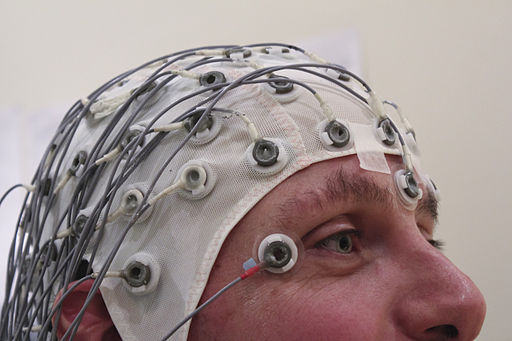 Image :  “An EEG can aid in locating the focus of the epileptic seizure”  by Chris Hope.  License: CC BY-SA 2.0

The term epilepsy refers to recurrent, unprovoked seizures that can result from a known or an unknown cause.

A patient diagnosed with epilepsy who presents with a seizure is considered an epilepsy emergency.

A seizure is not necessarily motor; it is defined as an episode of neurologic dysfunction caused by abnormal neuronal activity. It can be characterized by a sudden change in senses, perception, or behavior. A convulsion is a seizure occurrence with motor activity.

Status epilepticus is a state of recurrent/ prolonged seizures without a return to consciousness for more than five minutes. Epilepsy syndrome is a clinical entity of consistent clinical features, such as the age of presentation, EEG pattern, seizure type, and response to antiepileptic medications.

When a patient is having a seizure, the term ictus is used to describe the period of seizing. The term postictal refers to the period that follows the seizure. An overview:

The most common causes of a seizure are:

A new-onset seizure disorder may be the first presentation of an epilepsy disorder. Epileptic seizure activity mostly originates from a discrete region of the cortex in the initiation phase that is characterized by two events in an aggregate of neurons, i.e., a high-frequency burst of action potential and hypersynchronization.

Later, the effect then spreads to other brain areas during the propagation phase. This leads to increased levels of NMDA and Calcium ions that exacerbate the situation due to enhanced neurotransmitter release.

Epidemiology of Epilepsy and Seizures

Up to 200,000 new cases of epilepsy or seizures occur in the United States each year. Half of these cases will be classified as an epilepsy disorder once the seizures recur. In the United States, 50,000 to 150,000 patients will reach status epilepticus, which is an epilepsy emergency, every year. The most important risk factors for epilepsy and new-onset seizure disorder include head trauma, history of stroke, and a family history of epilepsy.

Clinical Presentation of Epilepsy and Seizures in the Emergency Department

When a patient presents to the emergency department with a seizure, it is important to establish whether it is the first seizure or a recurrent one.  If the patient has a known history of an epilepsy disorder, compliance with antiepileptic medications should be checked. When a patient presents with a new-onset seizure disorder in an emergency setting, a medical history, physical examination, and workup should be completed to rule out other causes, such as stroke, brain tumor, intracranial hemorrhage, trauma, hypoxia, vascular abnormality, hypoglycemia, electrolyte disturbances, meningitis, encephalitis, alcohol or medication withdrawal, drug-induced seizures, and malaria.

Medication history is important in the emergency department setting when dealing with a patient who is presenting with seizures. Tricyclic antidepressants and isoniazid overdose can cause seizures.

The physician should also try to characterize the seizure activity by its duration, manifestation, associated warning signs, such as photophobia, and interictal occurrences, such as tongue biting, eye-rolling, and excessive salivation.

Laboratory Investigations in Patients Presenting with Seizures to the Emergency Department

Imaging Studies in Patients Presenting with Seizures to the Emergency Department

All patients with new-onset seizures or those presenting with status epilepticus to the emergency department should receive a non-contrast computed tomography scan as soon as possible while at the emergency department. The rationale behind this recommendation is to exclude life-threatening, catastrophic causes of seizures, such as intracranial hemorrhage.

Patients presenting with a first-time generalized tonic-clonic seizure who have returned to normal and have no neurological deficits on their examination should receive a computed tomography scan of the head. However, this can be done in an outpatient setting. If computed tomography is available at the emergency department, all patients presenting with seizures should be screened even if they have returned to a normal baseline. 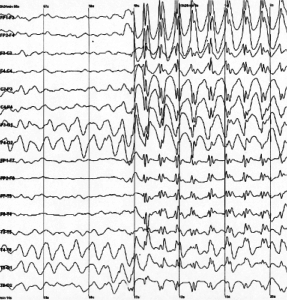 Image :  “An electroencephalogram of a person with childhood absence epilepsy showing a seizure”  by Der Lang.  License: CC BY-SA 2.0

Patients in status epilepticus should also receive a phalography (EEG) study if available at the emergency department. This is important because an EEG can identify whether the problem is focal or generalized and can provide valuable information about the prognosis.

Treatment of Seizures at the Emergency Department

Benzodiazepines should be administered intravenously, intramuscularly, or rectally, especially in those with prolonged seizures or status epilepticus. Lorazepam is the benzodiazepine of choice in managing seizures in an emergency setting. Intranasal midazolam or rectal diazepam are also good options for the emergency care of a patient presenting with a seizure.

If benzodiazepines fail to control the seizures in the emergency setting, phenytoin should be administered. Patients who do not respond to benzodiazepines and phenytoin are diagnosed with refractory status epilepticus.