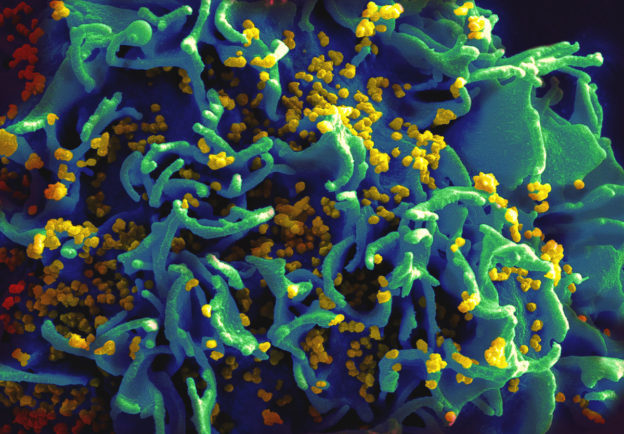 Malnutrition is the most common cause of acquired immunodeficiency in the developing world, and protein-calorie malnutrition is usually implicated in these cases.

There are two types of protein-calorie malnutrition:  Marasmus and kwashiorkor. Marasmus is caused by a deficiency of protein and other nutrients; kwashiorkor is caused by protein deficiency. Patients with either condition are clearly underweight and have muscle wasting, but generalized edema occurs only in kwashiorkor.

The thymus gland, which is implicated in producing and maintaining T-cell immunity, is atrophic in patients with severe malnutrition. These patients also have significantly reduced thymic hormone production. Therefore, T-cell mediated delayed-type hypersensitivity reaction, lymphocyte proliferation, and CD4+ differentiated T-cells are also reduced. While immunoglobulins are not affected in malnutrition-related immunodeficiency, the ability of B-cells to process antigen is usually impaired because the T-cells cannot present antigen.

Malnourished patients also have impaired neutrophils and other polymorphonuclear leucocytes. They show abnormal phagocytosis  (inability for intracellular killing of engulfed organisms). Natural killer cells do not function as effectively.

Lymphoid malignancies are associated with acquired immunodeficiency and an increased risk of infections.

We will focus on three main types of lymphoid malignancies that are clearly associated with an increased risk of immunodeficiency:

Non-Hodgkin lymphoma induces impaired immunity due to the continuous depletion of B cells and T cells.

Patients with leukemia do not develop impaired T-cell or B-cell immune responses except for chronic lymphocytic leukemia.

Patients with chronic lymphocytic leukemia develop impaired B-cell immune responses due to the  inability of B-cells to differentiate into plasma cells, which causes hypogammaglobulinemia. Therefore, patients with chronic lymphocytic leukemia are unable to develop an immune response against typhoid, diphtheria, tetanus, mumps, influenza, and cholera vaccines.

Patients who have markedly low IgG levels are at the highest risk of developing life-threatening infections. Intravenous immunoglobulin treatment is indicated in these patients to lower the risk of acquiring infections. Patients with chronic lymphocytic leukemia have a normal T-cell function with an impaired B-cell response.

Fungal infections, such as candidiasis and histoplasmosis, are also associated with an impaired delayed-type hypersensitivity reaction as well as an inability of lymphocytes to process antigens for poorly understood reasons.

Protozoal infections, especially malaria, are associated with impaired B-cell function secondary to impaired T-cell function. Such patients have a poor response to protein-based vaccines, such as tetanus and mumps vaccines.

The measles virus is associated with impaired T-cell and B-cell function, in addition to lymphopenia. The virus can also impair the function of natural killer cells. The Epstein-Barr virus is associated with impaired T-cell responses and immunosuppression; as a result, patients with acute infectious mononucleosis develop an impaired delayed hypersensitivity response and reduced natural killer cell activity.

Cytomegalovirus infects macrophages, which in turn play an important role in immunosuppression. Infected macrophages are rendered unable to present processed antigens for recognition by T-cells and B-cells.

Patients with HIV infection develop lymphopenia. The acute stage is marked by an increase in CD8+ T-cells with progressive depletion of all T-cell and B-cell subtypes in later stages. CD4+ T-cells are usually more depleted than CD8+ T-cells, hence the CD4+/CD8+ ratio is usually lower than normal.

Thus, the above-stated events mark acquired immunodeficiency because of the HIV virus.

Glucocorticoids decrease the number of circulating CD4+ T-cells after the first injection by sequestering T-cells into the lymphoid compartments. If no further injections are administered, the total CD4+ T-cells number should return to normal in two days.

In addition to their effect on T-cells function and traffic, glucocorticoids also reduce interleukin production (IL-1, IL-2, IL-4, and IL-6).

Neonates who are delivered prematurely show impaired T-cell and B-cell responses, as well as impaired antigen processing and presentation, due to lack of exposure to maternal immunoglobulins through the placenta inside the uterus. Additionally, full-term neonates depend heavily on maternal IgA and IgG antibodies, which cross via the placenta, or breast milk, which provides immunity to neonates against infections after birth.

Pregnancy is a natural phenomenon that is associated with physiologic immunosuppression. Immunosuppression is specific to the maternal-fetal interface in the placenta. Pregnant women are at an increased risk of developing infections due to their impaired immunity.

“Serum Immunoglobulins in the Newborn” Image created by Lecturio

In infancy, the thymus produces T-cells with a mixture of specificities.

T-cell numbers in the peripheral pool are maintained by the replication of circulating cells.

In adult life, proliferation in the periphery maintains the size of the T-cell pool.