Are you more of a visual learner? Check out our online video lectures and start your course “Reproductive System” now for free! 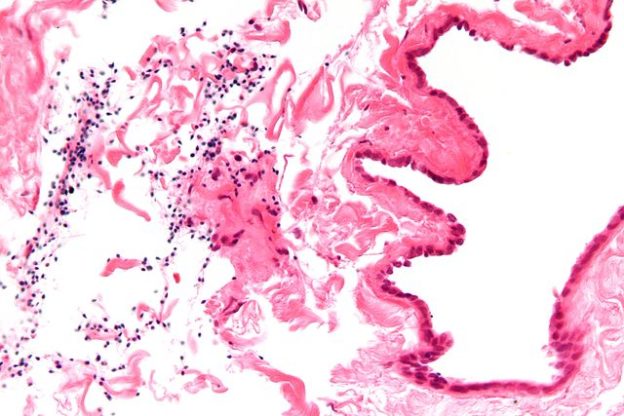 This is the pathological collection of fluid in the tunica vaginalis around the testes.

Various mechanical theories have been expatiated to explain the existence of hydrocele. The significant relevant ones are summarized below:

Hydrocele has been variously classified in literature. The simplest segregation is as follows:

These chronic, longstanding relatively asymptomatic hydroceles are not secondary to any other defined primary pathology of the testes or the scrotum. They are usually painless and subsequently commonly subjected to ignorance and delay in seeking medical attention. However; long-standing pressure atrophy of the testes has been documented and hence treatment is essential.

Other described hydrocele variants are as follows:

Also known as “secondary hydrocele”; it is often ancillary to an underlying primary pathology.

Various causes of an acquired hydrocele can be tabulated as follows:

The most common presentation is that of a chronic scrotal mass that is progressively increasing in size and painless. The mass may be of a differing size as in communicating hydrocephalus. They also present with a fluid like collection in the scrotum that transilluminates. Other relatively rare symptoms are summarized as follows:

Hydrocele is a clinical diagnosis. A simple history and clinical examination often suffice to reach the diagnosis.

Classic clinical examination tests described for primary hydrocele can be summarized as follows:

Ultrasonography is a useful adjunct in the diagnostic armamentarium of hydrocele. It often subserves as the confirmatory authority and also conclusively rules out common differentials of inguinoscrotal swellings.

A hydrocele is usually a simple straightforward clinical disease. Often, however; closely related differentials can mar the diagnosis. These differentials are listed as follows:

Hydrocele management is essentially surgical. It is relatively simple, definitive and curative. Various procedures have been described in the literature; all having withstood the test of time. They are as summarized below:

Sclerotherapy is an available alternative to surgical intervention; it has inferior results and higher morbidity. About 15-20 ml of  6% aqueous phenol is used in adjunct with lignocaine for additional analgesic effects. Use of tetracycline as a sclerosing agent has fallen out of favor as the procedure incites considerable pain.

A hydrocele is a fairly benign disease with definitive treatment options. Rare but well-described complications in literature can be summarized as follows:

Benign cystic accumulation of barley water like fluid containing spermatozoa and often is encountered at the superior aspect of the epididymis. This retention cyst is termed as “spermatocele”. They are usually unilocular in nature.

Often paratesticular in location, these fluctuant nodular cysts are formed by obstruction of rete testis or epididymal passages, resulting in diverticuli with sperm containing fluid. It is often the presence of debris within the cyst that distinguishes spermatoceles from simple cyst of the epididymis.

Spermatocele commonly arises from the head (caput) of the epididymis. Other potential locations for spermatocele help in topographical segregation as follows:

Spermatocele usually presents as an innocuous unilateral scrotal swelling. It is typically asymptomatic. Often located postero-superiorly; it occasionally leads to aching discomfort and heaviness. It is not uncommon to find spermatocele as an incidental examination finding.

Investigations often used as adjuncts to the physical examination can be summarized as follows:

Differential diagnoses for spermatocele are listed as follows:

Various treatment strategies can be summarized as follows:

Intrascrotal collection of blood around the testes is termed as “Hematocele”. It often develops as an iatrogenic complication of surgical intervention on the scrotum. Occasional scrotal trauma can manifest as hematocele. Pain and history of precedent trauma to the scrotum help in diagnosis. Ultrasonography is the first and last investigation deemed necessary in diagnosis. Increased echogenicity with internal septae is characteristic.

Hydrocele is culmination of abnormal fluid accumulation in the tunica vaginalis surrounding the testes. It has a benign natural course. Surgical treatment is definitive, curative and relatively free of morbidity, complications and relapses.

Congenital hydrocele is secondary to persistent patent processus vaginalis with communication with the peritoneal cavity.

Acquired hydrocele is secondary to an underlying primary pathology. Timely treatment of the primary inciting factor often leads to regression of the secondary hydrocele.

Spermatocele is a benign retention cyst containing spermatozoa at the postero-superior aspect of the head of the epididymis.

While small asymptomatic spermatoceles can be expertly observed; spermatocelectomy in rest of the cases is a definitive treatment option. Family completion is a pre-requisite for the same.

Hematocele is blood accumulation in the scrotum outside the testes. It is often secondary to trauma or iatrogenic insult to the scrotum and its contents.