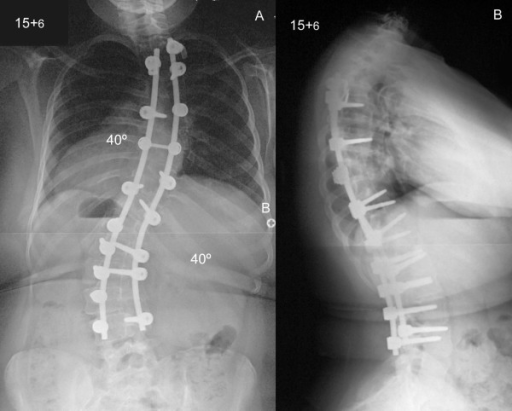 Image: Postoperative posteroanterior (A) and lateral (B) radiographs of the spine show correction of the thoracic and lumbar scoliosis to 45 and 40° and a balanced spine in both the coronal and sagittal planes. By Tsirikos AI, Baker AD, McClean C. License: CC BY 2.0

Definition of Scoliosis in Children

Epidemiology of Scoliosis in Children

Scoliosis can occur on the left or right side or on both sides of the spine in different sections. There are many types of scoliosis in the pediatric population, with idiopathic scoliosis representing most cases (80%). The lumbar and thoracic segments are mostly involved in this condition.

Etiology of Scoliosis in Children

Scoliosis is idiopathic in the majority of cases. The condition occurs more commonly in girls. According to a recent data, 3 to 5 children per 1000 are affected and require appropriate treatment. Scoliosis can be divided into 3 major types:

The cause has not been discovered so far. Idiopathic scoliosis is subclassified into the following categories:

Congenital scoliosis occurs due to defects in the fetal growth process as a result of the following factors:

Secondary scoliosis involves forms that develop because of other abnormalities. These cases often occur as a consequence of the following:

Symptoms of Scoliosis in Children

Symptoms of scoliosis include the following:

Diagnosis of Scoliosis in Children

Early detection is essential for effective treatment. Scoliosis is diagnosed on the basis of history, physical examination, and radiologic investigations.

Clinically, the degree of spinal deviation from the normal axis can be established with the help of various tools, such a scoliometer, the Adams forward bend test, and the plumb-line test. In the scoliometer technique, the physician stands behind the patient. The patient is asked to bend forward with the feet together, knees extended, and hands hanging freely by the side. The scoliometer is placed over the back, and any measurement greater than 7° demands radiologic investigations.

The shoulder and hip girdle are also observed by the doctor while the patient stands straight with the back facing the doctor. Any discrepancies in limb lengths and neurologic findings are also determined.

Radiography is a primary tool for diagnosing scoliosis. The degree of spinal curvature is measured from the X-ray image. The Cobb angle is measured by drawing 2 lines above and below the curved segment that are parallel with the top and bottom of the tilted vertebrae. A perpendicular line is then drawn to each of the parallel lines. The angle formed where the perpendicular lines intersect called the Cobb angle.

Computed tomography scans and magnetic resonance imaging are also used for diagnosing the condition. These investigations show structures in detail and can be used to detect any other underlying pathology.

Treatment of Scoliosis in Children

The treatment of scoliosis depends on many factors, which include the following:

The goal is to stop the progression of the deformity. Treatment plans are discussed in the following sections.

Repeated observation and examination are required when the spine is curved less than 25° degrees and the child is in a phase of rapid growth. This is done to determine whether the spine continues to curve or not. The progression rate depends on skeletal enlargement and maturity, and it stops when the child has reached puberty. After the age of skeletal maturation, the conditioned is monitored every 8–12 months to determine the status of the spinal deformity.

Bracing is used when radiography shows spinal curvature of 25°–30°. It is also used if the child has a curvature of 20°–25° and is growing and the condition is not showing improvement. The types and duration of bracing vary with each case of scoliosis. The aim is to stop the progression of the condition; bracing cannot correct spine segments that are already curved. Bracing also significantly reduces the incidence of surgery. 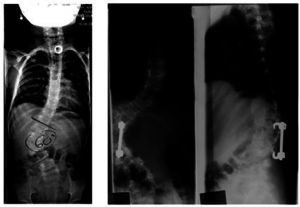 Surgery is used when the curvature is more than 45°. Bracing is generally not successful for this magnitude of curvature, so surgery is the only option. A surgical technique called ‘spinal fusion’ is used to straighten the curvature and fuse the vertebral bodies to align them in a straight fashion.

This helps stop the growth of the affected segment completely. Only the curved vertebral bodies are fused together; the rest are mobile. Metal rods are used to hold the bones until the process of fusion is completed. These are attached with wires, screws, and hooks to the spine.

Osteogenesis imperfecta is a bone disorder that produces fragile bones that can break easily. It is present from birth, and it usually occurs in children with a family history of the disorder. As is indicated by the name, it describes impaired bone formation. Multiple fractures can occur and, in many cases, they occur before birth. The intensity can vary from mild to severe. The mild form results in fractures, whereas the severe form presents more like a syndrome constituting a pattern of disorders. These include:

Osteogenesis imperfecta is an inherited disorder that often runs in a family. Spontaneous mutations can also occur at the time of conception. It is due to defects in the genes that produce type 1 collagen, a protein that gives strength to the bones. The absence of enough collagen will result in weak bones.

Sometimes other genetic mutations are responsible for the disease. None of the family members carry any gene copy, but the child has the disease.

In osteogenesis imperfecta, bones can break very easily, even with low-impact activities such as a diaper change. Some individuals with the disease will have a few broken bones during their lifetime, and others may have hundreds. Symptoms can be present at birth or may appear at a later stage, such as during the teenage years.

Generally, the symptoms of brittle bones can be described as follows:

In the mild form, fewer signs are present. There may be smaller bone deformity, fewer fractures, normal height, some hearing loss, and their normal life expectancy. The incidence of fractures decreases after puberty.

The disease can be easily diagnosed with a history and physical examination. Laboratory blood and urine tests are needed to rule out other similar conditions, such as rickets. DNA blood testing is used for confirmation and can identify faulty genes with an accuracy of 90%. Collagen analysis can also be done, but a negative result is not sufficient to rule out osteogenesis imperfecta. Prenatal chorionic villus sampling and ultrasonography are useful diagnostic tests.

Plain X-ray imaging can show fracture lines in the bones. DEXA (dual-energy X-ray absorptiometry) scans can be performed to predict the risk of future fractures. A bone biopsy can be done to study histologic changes, but this not routinely performed for osteogenesis imperfecta.

There is no definitive cure for the disease. Treatment is targeted at improving disease symptomatology: pain relief, prevention of bone breakage, mobility improvement, and breathing assistance. The disease demands life-long treatment and proper monitoring. Various treatment options used for osteogenesis imperfecta include the following:

Bisphosphonates are given to improve bone density. This is helpful in moderate to severe osteogenesis imperfecta. Teriparatide, which is a recombinant form of parathyroid hormone, is also administered. Growth hormone replacement therapy and gene manipulation therapy is in the research phase.

Surgery is needed to repair broken bones. More specifically, it is used to correct bone deformities, stabilize the spine, and repair the tiny middle ear bones to improve hearing. Rods are also placed to stabilize long bones and prevent fractures.