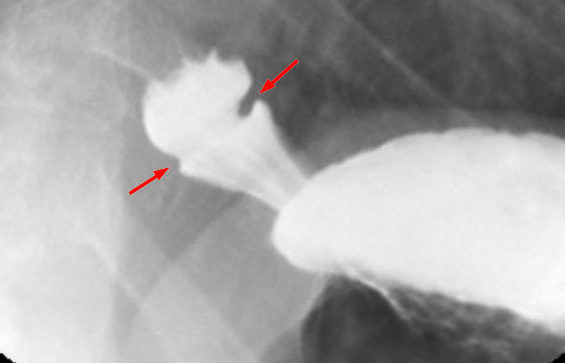 Schatzki rings are muscular or mucosal and submucosal concentric constrictions in the lower third of the esophagus. They were first reported in the 1950s but Schatzki was the first to define them accurately and to categorize them into two types, A and B.

Type A rings are muscular constrictions in the esophagus and are rarely associated with any symptoms. Type B rings are like a diaphragm and are mucosal rings without a muscular component. Type B rings usually cause intermittent dysphagia for solids.

While Schatzki rings are incidentally identified in up to 15% of patients undergoing a barium swallow test, few of them are actually symptomatic. The condition is usually not severe and dysphagia is intermittent and mainly for solids.

Gastroesophageal reflux disease is thought to be related to an increased risk of Schatzki rings due to repeated acid exposure at the lower esophagus. This correlation can be supported by the fact that patients with Schatzki rings if receive combined treatment of dilation and acid suppression are at a much lower risk of ring recurrence regardless of having gastroesophageal reflux disease.

Another study confirmed that most patients with Schatzki rings have indeed some degree of acid reflux even if they do not have the other typical symptoms of gastroesophageal reflux disease. Finally, it has been found that the risk of peptic ulcer formation in the lower esophagus can be linked to the presence of Schatzki rings.

For Schatzki rings to form, several factors can play a role. Gastroesophageal reflux disease has been associated with an increased risk of lower esophageal rings formation. Several hypotheses exist to explain this and they include: thinner and smaller rings can limit the acid reflux and act as a protective mechanism, the rings are in fact short peptic strictures or thick rings are part of the spectrum of reflux disease.

Additionally, certain medications that are known to cause esophagitis such as bisphosphonates have been associated with an increased risk of Schatzki rings formation.

The majority of the patients with Schatzki rings are asymptomatic and those who are symptomatic do not have clear-cut symptoms to point towards the diagnosis.

Patients usually complain of intermittent dysphagia to solids that are not progressive. A temporal relationship between dysphagia and eating larger meals faster than usual is usually found. Patients usually describe these symptoms to be months or even years apart.
The pathophysiological relationship between Schatzki rings and gastroesophageal reflux disease means that many of these patients will have reflux-related symptoms such as heartburn and regurgitation. Physical examination is not helpful in patients with Schatzki rings.

The first step in the diagnostic workup of Schatzki rings is to perform a barium esophagram. In fact, barium esophagography studies are more sensitive than endoscopy for Schatzki rings. The barium swallow test shows an indentation at the gastroesophageal junction. 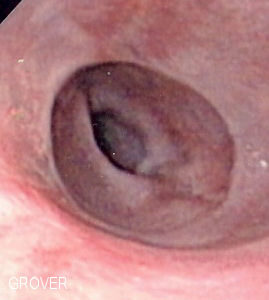 Endoscopy can be also helpful in the diagnosis of Schatzki rings and in excluding other diagnoses such as strictures, esophagitis, ulcers or malignancy. The figure shows how a Schatzki ring looks like on an endoscopy.

If a biopsy is performed of the Schatzki rings, the ring will be found to consist of mucosa and submucosa but without a muscular component.

Patients who present with dysphagia and their barium swallow test shows a lower esophageal ring that is consistent with a Schatzki ring should undergo an endoscopy to exclude other possible diagnoses before treatment.

The best treatment for a Schatzki ring involves using a French mercury bougie or a balloon to dilate the esophagus and destroy the ring. The dilation should be strong enough to actually destroy the ring’s structure and not just stretch it.

The next step in the management of Schatzki rings is to prescribe a proton pump inhibitor and to aggressively treat gastroesophageal reflux disease. The combined regimen of acid suppression and dilation has been found to significantly lower the risk of ring’s recurrence compared to dilation alone.

Unfortunately, Schatzki rings are known to be recurrent but luckily they respond well to repeated dilation therapy. Patients usually present with recurrent dysphagia that is again for solids and not liquids.

If the patient presents with more than two recurrences, he or she might benefit from larger pneumatic balloons dilation therapy. Before attempting to redilate, other causes of dysphagia should be excluded by an endoscopy.

A more recent approach is endoscopic electrocautery. In a randomized controlled trial, it was found that biopsy of the ring in the 4 quadrants during endoscopy can relieve dysphagia as equally as dilation. Despite having a similar efficacy, the endoscopic procedure was described as better tolerated when compared to dilation therapy.

For patients with more severe disease that is not responsive to dilation therapy or endoscopy intervention, electrosurgical incision of the ring can be attempted. This procedure was found to be more effective than dilation in delaying the recurrence of dysphagia.

Finally, patients with recurrent and symptomatic Schatzki rings can undergo a complete ring excision using jumbo cold biopsy forceps and endoscopy. The procedure seems to be feasible and is considered as safe without any serious complications.

Patients, regardless of the modality of treatment, should be always advised to take acid suppression therapy such as proton pump inhibitors or H2 receptor blockers therapy. The only relevant diet modification would be to advise the patient to eat more slowly and to chew food well.

Esophageal Webs and Rings via medscape.com