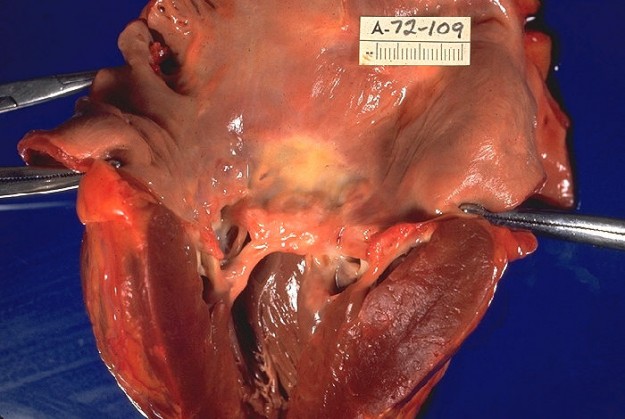 Rheumatic fever is an inflammatory connective tissue disease caused by bacterial toxins after an infection with group A Streptococci (GAS). It is a nonsuppurative sequelae of the infection.

As streptococci infections of the oropharyngeal tract are usually treated with antibiotics (i.e. penicillin) and prevented with timely vaccines, rheumatic fever is rare in industrial countries.

Contrary to this, in developing countries, where there are high rates of poverty, poor housing and ventilation, and lack of antibiotics, bacterial infections with GAS are common, leading to many cases of rheumatic fever. Rheumatic fever occurs primarily in children, especially between the ages of 5 to 15.

Tonsillitis or pharyngitis due to group A beta-hemolytic Streptococci may lead to an infection-induced autoimmune reaction, which in turn can cause rheumatic fever.

Both pathways lead to an antibody-antigen reaction with mediators such as TNF–α, IFN–γ, and IL–10 being predominant with a reduction in the inflammatory regulatory cytokine IL–4. The disease leads to pancarditis that can cause stenosis of the valves 2–10 years after the initial rheumatic fever episode. 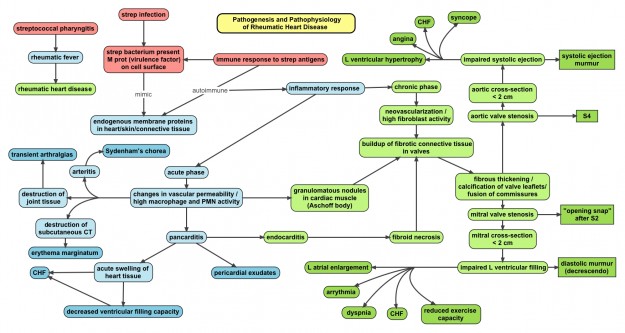 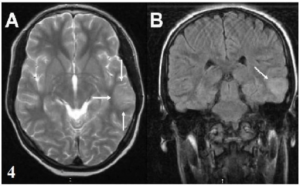 Typically, rheumatic fever occurs 2 to 3 weeks after infection. It presents general symptoms like fever, headaches, and sweating. Also, migrating polyarthritis with swelling and reddening occurs. The heart can also be affected by rheumatic fever. Depending on which structure is affected, the disease can expand to a pancarditis. Subcutaneous rheumatic nodules can be found on the skin.

A late sequela is Sydenham chorea (chorea minor), which can occur months after the infection with the Streptococci.

The clinical examination shows a friction rub on auscultation and signs of pericardial effusion or heart insufficiency. Other signs include tachycardia, cardiac dysrhythmia, and audible cardiac murmurs if cardiac valves are affected.

Laboratory tests may reveal increased inflammatory parameters. Also, Streptococci can be detected in the throat swab. Antibodies like antistreptolysin O or antideoxyribonuclease B can be determined. If the cardiac valves are affected, this can be detected in echocardiography. The ECG can demonstrate unspecific changes. 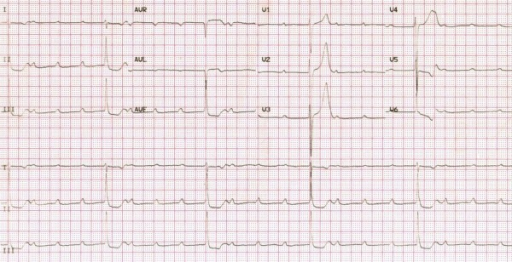 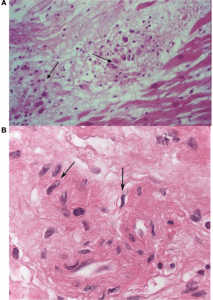 Histologically, so-called Aschoff bodies (image on the right) can be found, which consists of fibrinoid necroses around which rotund and giant cells have accumulated. Also, Anitschkow cells, which are histiocytes with owl-like nucleoli, are typical of rheumatic fever.

Rheumatoid arthritis has to be distinguished from rheumatic fever.

The 3 main treatment goals are:

Taranta, A., & Markowitz, M. (1981). Rheumatic Fever: A Guide to its Recognition, Prevention and Cure with Special Reference to Developing Countries. Dordrecht: Springer Netherlands.