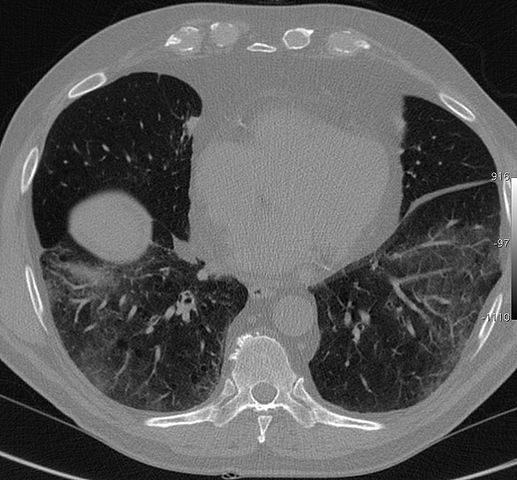 These two groups present with overlapping clinical features of dyspnea and other pulmonary manifestations, but they are easily differentiated based on pulmonary function testing.

Restrictive lung diseases have a hallmark of:

Intrinsic/interstitial lung disease affects the lung parenchyma, leading to inflammation, scarring, and fibrosis of the lung. It may also cause debris or fluid to accumulate in air spaces, leading to pneumonitis. These diseases include:

Scleroderma/systemic sclerosis (SSc) is an autoimmune connective tissue disorder with a heterogeneous presentation. It induces excess collagen production, which changes the skin’s appearance and texture. Other symptoms include vasculopathy and inflammation affecting the blood vessels, muscles, internal organs, and lungs.

Polymyositis is an idiopathic inflammatory myopathy that is characterized by the triad of:

Dermatomyositis is similar to polymyositis. Also, these patients have characteristic skin rashes involving sun-exposed areas such as the face, neck, upper chest, and hands.

In polymyositis and dermatomyositis, lung involvement is more common with anti-synthetase antibodies.

NSIP is the second most common form of interstitial lung disease. It mainly affects adults aged 40–50 years, with a slight female predilection.

Dermatomyositis and polymyositis are rare diseases with a prevalence of 0.5–8.4 cases per million people. They are associated with people of all ages. Two peaks are observed: the first peak is around 5–10 years of age and the second peak is around 50 years.

They have a female to male ratio of 2:1, and African-American women are more likely to be affected. Lung involvement precedes other system involvement in up to 30–40% of dermatomyositis and polymyositis.

Connective tissue disorders are mostly autoimmune disorders that have a genetic and environmental influence. Certain risk factors have been linked to these disorders:

When a genetically predisposed individual is exposed to environmental triggers, such as infections, drugs, or malignancies, an autoimmune process is triggered that affects multiple tissues, including the lungs. This leads to progressive destruction of lung parenchyma due to persistent inflammation, fibrosis, and vascular injury.

Besides lung parenchyma inflammation and fibrosis, the airway, pulmonary vasculature, and chest wall may also be involved, leading to:

These patients have clinical features affecting the respiratory system as well as systemic involvement.

The systemic features depend upon the underlying connective tissue disorder.

It affects almost every system, causing:

Lung biopsy and histology show a mixed pattern of inflammation and fibrosis.

An echocardiogram may be considered in cases of severe cardiovascular compromise. It helps in diagnosing the associated pulmonary hypertension. Cardiac catheterization can be done to confirm the pressures.

The treatment is mainly symptomatic because the pulmonary changes are mostly irreversible. Effective therapies for connective tissue disease-associated interstitial lung disease (CTD-ILD) are still lacking, but multiple clinical trials have been carried out with varying degrees of success.

Corticosteroid therapy with high dose prednisone should be initiated, especially in situations of lung involvement. To treat dermatomyositis and polymyositis, the drug is administered for 4–8 weeks, and in that time, muscle enzymes must have returned to normal levels.

Immunosuppressive therapy with methotrexate, azathioprine, and cyclophosphamide decreases autoimmune activity within the body. These drugs are considered when the disease is refractory to high dose steroids. The need is based on:

Complications associated with restrictive lung disease can arise from the disease progression or problems related to treatment:

The five-year survival rate for NSIP ranges from 86–92% for the fibrosing type and up to 100% for the cellular intervention due to its excellent response to treatment.
The median survival of systemic sclerosis with lung involvement is 6–8 years.