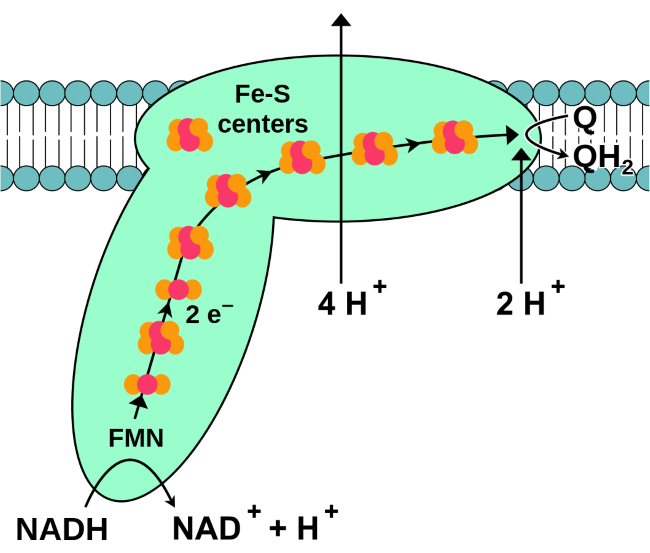 Complex I or NADH-Q oxidoreductase. The abbreviations are discussed in the text. In all diagrams of respiratory complexes in this article, the matrix is at the bottom, with the intermembrane space above.

Function and Location of the Respiratory Chain

The function of the respiratory chain is to recycle the reducing equivalents NADH/H+ and FADH2, which are used during various metabolic processes. Their electrons are therefore transferred to oxygen.

The large amounts of energy released during the process are simultaneously used as a proton gradient to synthesize adenosine triphosphate (ATP) from adenosine diphosphate (ADP) and phosphate. This last step is known as oxidative phosphorylation.

The respiratory chain is subdivided into at least 4 multienzyme complexes in addition to oxidative phosphorylation. All complexes are localized to the inner mitochondrial membrane. The electron transfer is therefore divided into multiple steps to avoid the explosive reaction typical of hydrogen-oxygen mixtures on the one hand and fully utilize the energy produced by the exothermic reactions on the other hand. 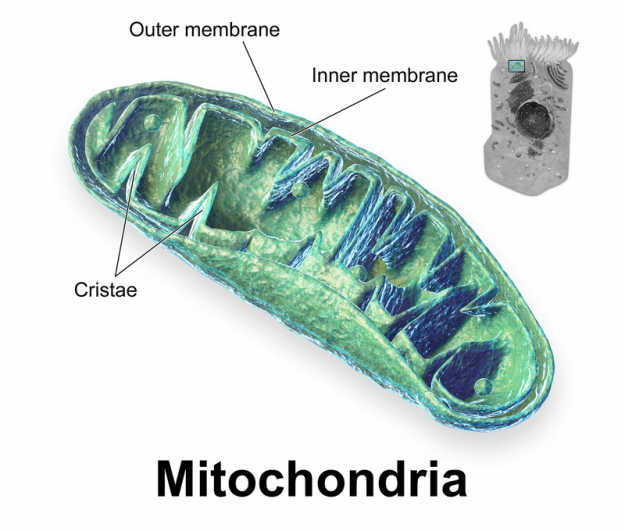 The 1st complex of the respiratory chain is the NADH ubiquinone oxidoreductase, which is a transmembrane protein oxidizing NADH/H+ to NAD+. The NADH/H+ transfers both of its electrons and hydrogen atoms to the flavin, and are reduced simultaneously.

N.B. Complex I transfers 2e– and 2H+ from NADH/H+ to ubiquinol, leading to the pumping of 4H+ from the matrix into the inner membrane. Further, the mutations occurring within this complex have been attributed to numerous ailments such as Alzheimer’s disease, MELAS syndrome (mitochondrial myopathy, encephalopathy, lactic acidosis, and stroke), and Leber’s hereditary optic neuropathy (LHON).

The 2nd complex of the respiratory chain is known as the succinate ubiquinone oxidoreductase, which mediates the abrupt entry of electrons from FADH2. Two electrons and hydrogen atoms from succinate and ubiquinone each are thereby transferred to ubiquinone. Succinate is oxidized from FAD during the process, which is in accordance with the 1st step of regeneration in the citric acid cycle. FADH2 now transfers the electrons and hydrogen atoms to ubiquinone. The same iron-sulfur center from complex I mediates this reaction.

N.B. Complex II transfers 2e– and 2H+ from succinate to ubiquinone. Complex II is the only component of the respiratory chain, which is not a proton pump.

During this process, the cytochrome changes its valence from a Fe3+ to a Fe2+state. Cytochrome C is located in the intermembrane space of the mitochondrion and can, therefore, move from complex III to complex IV.

N.B. Complex III derives 2e– from ubiquinol out of complexes I and II and transfers them on to 2 cytochrome C molecules, during which 4H+ are pumped from the matrix into the intermembrane space.

The 4th complex of the respiratory chain is a transmembrane protein and is known as cytochrome-C-O2 oxidoreductase. In this complex, electrons from both cytochrome C molecules in complex III are transferred onto 1/2 O2. In this process, the cytochrome C is oxidized from 1/2 O2 resulting in the formation of O2-, which combines with 2 H+ ions in the mitochondrial matrix to form water.

Complex IV is copper-dependent. Copper A and B collect the electrons in the electron transport chain for simultaneous transfer to oxygen. Again, the 2 protons are pumped into the intermembrane space.

N.B. Complex IV receives 2e– via 2 cytochrome C molecules from complex III, and transfers them to oxygen. During the process, the 2H+ are pumped from the matrix into the inner membrane space. Complex IV is the only complex of the respiratory chain carrying an iron-sulfur center. 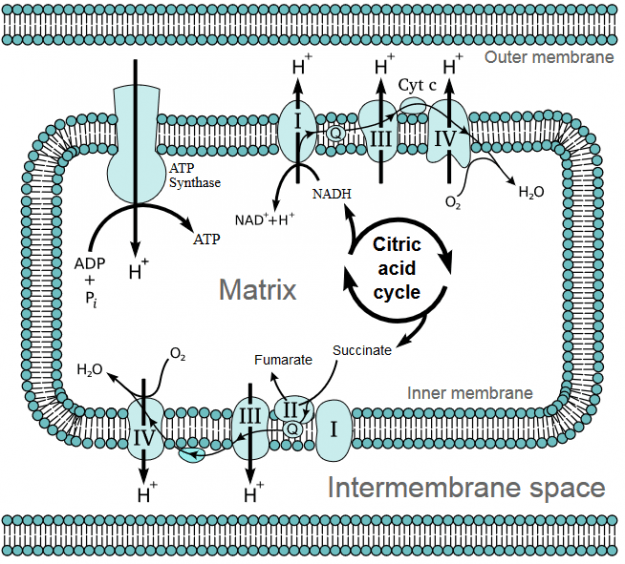 Components of the Oxidative Phosphorylation

The F1 component extends into the matrix space and is shaped similar to a mushroom. The actual ATP synthesis occurs here. The proton flow through the F0 subunit induces a rotation in the F1 component. Approx. 3 protons are needed for a full rotation and therefore, the synthesis of an ATP molecule.

The F1 portion contains 3 alpha and 3 beta subunits. The gamma unit is located in the middle. The beta unit exhibits a high affinity for ADP and phosphate in the ‘loose’ state.

Following another one-third rotation into the ‘tight’ state, the affinity for ATP rises until it is higher than the affinity for ADP and phosphate, leading to the synthesis of ATP. The beta unit turns into the ‘open’ position following another 1/3 rotation. The complete ATP is released from the binding pocket. The F1 component rotates again by a 3rd and the cycle is initiated from the beginning.

Energy Balance of the Respiratory Chain

Roughly 3 protons are needed for the synthesis of a single ATP. The oxidation of NADH/H+ releases 10 protons from the matrix into the inner membrane space, i.e., roughly 3 ATP molecules are synthesized per NADH/H+.

The oxidation of FADH2 leads to the transfer of 6 protons through the inner mitochondrial membrane, resulting in the synthesis of 2 ATP molecules per FADH2. Often, however, lower levels of ATP synthesis are indicated because a few protons are used for another purpose. However, not all of the protons that are released by complexes I, III and IV flow into the proton channel of the ATP synthase.

Inhibitors and Uncouplers of the Respiratory Chain

Substances that decrease or even block the respiratory chain and oxidative phosphorylation are divided into inhibitors and uncouplers. Inhibitors block specific complexes resulting in partial or complete inhibition of electron transport as well as drastic decrease or cessation of oxygen reduction.

Inhibitors of the respiratory chain

The antibiotic antimycin A inhibits the 3rd complex of the respiratory chain. Therefore, the electron transfer is inhibited in complex IV, which prevents the reduction of oxygen.

Hydrocyanic acid (HCN) inhibits the 4th complex of the respiratory chain. It blocks the electron transfer from cytochrome C to oxygen by rendering cytochrome oxidase inactive. Therefore, the electrons cannot be used and their accumulation leads to rapid inactivation of all complexes of the respiratory chain. As a result, protons are not pumped any longer, which leads to the termination of ATP synthesis. The cell respiration is completely blocked and results in deadly inner suffocation.

Cyanide toxicity also significantly inhibits the respiratory chain, especially in patients exposed to smoke inhalation during industrial or residential fires or in individuals and professionals handling cyanide. In essence, the Fe3+ from cyanide bonds with the cytochrome oxidase, resulting in detrimental effects involving the electron transport chain. The resulting inhibition of redox reactions impedes the functionality of proton pumps and cessation of energy production.

Uncoupler of the respiratory chain

The uncoupler of the respiratory chain separates energy synthesis from energy flow, which suggests that the proton gradient generated by the electron flow is directly reduced, and therefore cannot be used by ATP synthase. The energy that is not converted by ATP synthase is released in the form of heat. The electron transport, however, continues unobstructed, resulting in the same or even higher level of oxygen consumption via reduction, as the regulation of the respiratory chain via the ADP concentration is no longer effective.

The proton channel thermogenin is a physiological substitute for the uncouplers and is intrinsic to the inner mitochondrial membrane during cold. It appears in brown fat tissue and contributes to heat generation.

Dinitrophenol, however, is a pathological substitute for the uncouplers. It involves a liposoluble molecule stored in the inner mitochondrial membrane, which transports protons of the inner membrane space to the matrix area. The proton gradient is therefore reduced.

Calcium (Ca+2) is essential for electron transportation. Nonetheless, energy is required to pump Ca+2 into the mitochondrial structure; hence, no energy is stored in the form of ATP. Additionally, other physiological uncouplers such as valinomycin, which may be defined as an ionophore of oxidative phosphorylation is produced by certain species of Streptomyces. Valinomycin is comprised of 4 different residues: L-lactate, L-Valine, D-Valine, and D-hydroxyisovalarate. Essentially, valinomycin transports K+ from the cytosol into the matrix and H+ in the reverse direction, and thus diminishes the proton gradient.