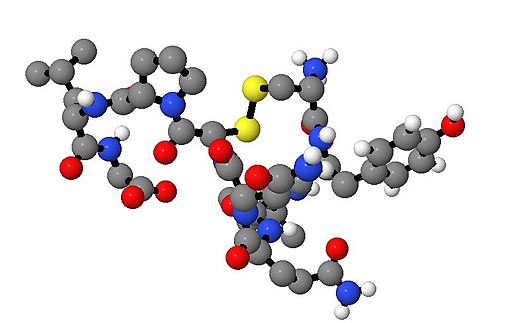 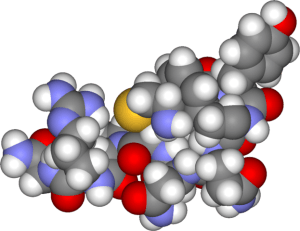 Antidiuretic hormone (ADH) or arginine vasopressin is a short peptide hormone. ADH and oxytocin are both produced by magnocellular neurons, both consist of nine peptides, and both are released by the posterior pituitary. The two hormones share 7 amino acids and have some cross-reactivity due to their structural similarity. ADH is found in the brain and in the peripheral blood. For this discussion, we will focus on the ADH found in the peripheral blood and its interaction with the kidney and vasculature. 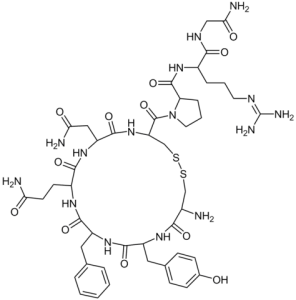 Under normal circumstances, ADH is produced by magnocellular neurosecretory neurons in the supraoptic and paraventricular nuclei of the hypothalamus. It travels down axons in the infundibulum (stalk) in secretory granules (Herring bodies), and is stored in the posterior pituitary gland and released under certain physiologic conditions. 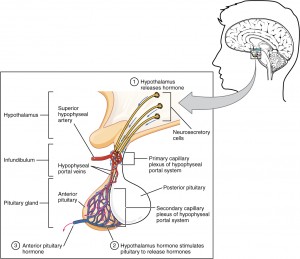 ADH is released from the posterior pituitary when stimulated by low-pressure baroreceptors found in the vasculature, osmoreceptors in the hypothalamus, cholecystokinin (CCK) from the small intestine, or in response to angiotensin II.

The mechanism of CCK regulation of ADH is not yet known. When the renin-angiotensin-aldosterone system releases angiotensin II into circulation it also stimulates the release of ADH. Angiotensin II has many effects that work towards increasing blood pressure.

There are several ADH receptors. AVPR1 receptors are found on afferent arterioles of the systemic circulation. When stimulated with ADH they constrict, increase vascular resistance, and increase blood pressure. This is considered a minor mechanism of blood pressure control.

AVPR2 is found on the basolateral side of the epithelial cells that line the collecting ducts in the kidney. When AVPR2 is stimulated the aquaporin-2 transport proteins are inserted into the luminal side of the collecting duct cells and water is reabsorbed down its concentration gradient. AVPR2 is also found on endothelial cells and stimulates the release of von Willebrand factor (vWF) found in Weibel-Palade bodies. This is an important part of coagulation and will be discussed in another article.

A deficient amount of ADH released by the posterior pituitary (a central issue) or kidney insensitivity to ADH (a peripheral issue) results in diabetes insipidus (polyuria, polydipsia, hypernatremia). Consumption of ethanol decreases ADH release and results in increased excretion of water and dilute urine.

The polyuria associated with diabetes insipidus is variable, from 3–20 L per day, and often profound. The ADH analog desmopressin is prescribed for cases of central diabetes insipidus as a hormone replacement. It is also prescribed to treat von Willebrand disease, mild hemophilia. Excess ADH leads to a state of euvolemic hyponatremia.

Another disease is called syndrome of inappropriate antidiuretic hormone secretion or short SIADH. Below is more information on it.

SIADH describes the condition of elevated ADH levels due to excess release from the posterior pituitary or from another ectopic source. This stimulates the AVPR1 receptors on arterioles to increase systemic blood pressure and AVPR2 receptors in the collecting tubules of the kidney to increase reabsorption of water which results in euvolemic hyponatremia (plasma sodium concentration < 135 mEq/L) as the plasma sodium and other electrolytes are diluted. In the urine, sodium concentration will be elevated and urine osmolarity will also be high.

Elderly, hospitalized, and chronic care patients are at greatest risk for developing SIADH.

A wide variety of conditions can result in SIADH. These are categorized into four groups: central nervous system causes, neoplasms, pulmonary causes, and medications. Virtually any insult to the brain may result in SIADH including infections (meningitis, encephalitis, etc) mass effect from neoplasm or brain trauma, or multiple sclerosis.

Some neoplasms ectopically produce ADH. This is one of the more common paraneoplastic syndromes and may be caused by small-cell lung cancer or mesothelioma, some GI cancers or some GU cancers. Diseases of the lungs such as infection, cystic fibrosis, and asthma may also result in SIADH. Finally, many classes of medications can cause SIADH including chemotherapy, NSAIDS, narcotics, and antidepressants. Specifically, vincristine, cyclophosphamide, amitriptyline, sertraline, and carbamazepine.

Pathology and Pathophysiology of SIADH

In the condition of SIADH, excess ADH is released without regulation. Under normal physiologic conditions in a healthy adult, several mechanisms work together to maintain homeostasis. The release of ADH in the response to high plasma osmolarity or low plasma volume is one of these mechanisms. The response to the ADH hormone at the kidney results in reabsorption of water and concentrated urine. As that water returns to the circulatory system it increases plasma volume and reduces the plasma osmolarity. This sends the signal to release ADH from the posterior pituitary.

As the plasma volume expands other homeostatic mechanisms react. The natriuretic peptide is secreted resulting in reduced reabsorption of electrolytes and water in the kidney and increased excretion of sodium and chloride. The results of excess ADH secretion and natriuretic peptide secretion cancel each other out and result in euvolemic hyponatremia.

The brain is very sensitive to low plasma osmolarity. Water moving down its concentration gradient into the tissue of the brain result in swelling and edema. If water shifts too fast a herniation is possible which is often fatal.

Symptoms associated with SIADH are the result of hyponatremia. Acute, rapid hyponatremia results in severe symptoms compared to a slow, chronic condition. Most symptoms are generalized and nonspecific including nausea, muscle aches, and weakness, tremor, and lethargy. Cerebral edema results in mental status changes including confusion and delirium, and if left untreated seizures and coma.

The criteria required to diagnose SIADH are laboratory-based.

A chest x-ray is warranted in unexplained hyponatremia. This will rule out lung cancer that may be causing a paraneoplastic syndrome. A direct ADH concentration is not required to make the diagnosis of SIADH and is rarely performed.

Many diseases result in hyponatremia, but SIADH should be high on your differential list if the patient is both hyponatremia and euvolemic. Other conditions include:

Several factors must be taken into account when devising the appropriate therapy for SIADH. Plasma sodium should be restored to normal levels to prevent cerebral edema, but if the concentration is increased too fast then central pontine myelinolytic (CPM) may occur.

Symptoms of CPM include dysphagia, dysarthria, and paralysis. Plasma and urine sodium levels should be evaluated frequently to prevent rapid correction. The first line of treatment for SIADH is restricting fluid intake. If this is insufficient to increase plasma sodium concentration then the next step is to use oral sodium chloride tablets or IV hypertonic saline.

Increasing plasma sodium concentration by 6 mEq/L a day is reasonable. In an emergency situation, it can be raised 6 mEq/L in 6 hours. Furosemide can be used in conjunction with sodium chloride therapy. This will increase the excretion of free water and increase plasma osmolarity. Vasopressin receptor antagonists (-vaptans) can also be used to block the AVPR2 receptors. Alternatively, demeclocycline, a synthetic antibiotic, induces nephrogenic diabetes insipidus and effectively increase urine output and increases plasma sodium levels.

Finally, urea can be administered orally to increase urine osmotic load and urine output. Urea is relatively benign and is filtered out by the kidney. It is an option for long-term treatment. It is also important to determine the cause of the SIADH and treating the underlying cause while treating the hyponatremia.

Progression and Prognosis of SIADH

Cerebral edema is the major consequence of the hyponatremia associated with SIADH. However, mild hyponatremia is relatively asymptomatic. When plasma sodium falls below 130 mEq/L, mortality increases 60-fold.