Image: “Back and front of a hand of a person suffering from Raynaud’s disease” by Vertebro. License: Public Domain

Raynaud’s disease (also Raynaud, or Raynaud’s phenomenon) was first described in 1862 by Auguste Raynaud. Even at a first look, the disorder is apparent, owing to the fact that the patient notices the change in the color of their skin, particularly in their digits.

At low temperatures, the skin becomes cold and pale due to abnormal vasoconstriction of the digital arterioles leading to diminished blood supply. This may result in the coldness and cyanosis of the digits as the distension of veins occurs, followed by the bluish skin coloration . With the rise of temperature, the skin turns warm and red as a result of the arterioles’ response to vasodilatation.

It took quite a few years of study for complete comprehension of the pathology and physiology of Raynaud, which continues to be explained today. In 2005, Hendrik classified the causes and mechanisms of Raynaud’s phenomenon into three groups, namely:

Raynaud’s disease is an exaggerated vascular response to cold temperature or emotional stress. The phenomenon is manifested clinically by sharply demarcated color changes of the skin of the digits. Reduction in the size of the blood vessels, most commonly in the fingers and toes, results in change of color from white to blue. As blood flow returns to the digits, the skin turns red.

Its affection is symmetrical, usually attacks in episodes, a clear demarcated line exists between ischemic part and unaffected part. 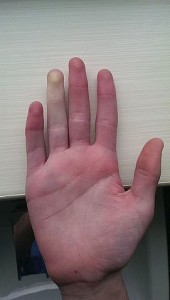 Image: “Raynaud’s Phenomenon in my right ring finger, viewed from the front of my hand. This occurs in cold weather on my fingers and my toes.” by Thomas Galvin. License: CC BY-SA 4.0

Raynaud’s phenomenon is an ailment causing a specific sequence of color changes in the extremities in response to stress or weather fluctuations, either hot or cold. A great number of people with Raynaud’s disease have extreme sensitivity to cold temperature.

Raynaud’s disease is classified into:

Primary Raynaud phenomenon (RP) or idiopathic Raynaud disease are terms to describe those patients without a definable cause for their vascular events. In this setting, RP is considered to be an exaggeration of normal vasoconstriction to cold exposure.

Secondary RP refers to those patients with RP in whom an associated disease or cause may underlie the attacks. Possible associations include atherosclerosis, scleroderma, lupus and rheumatoid arthritis. It can also be a result of taking assured medications, having frostbite, smoking or using vibrating power tools for numerous years. Therefore, it is sometimes referred to as secondary Raynaud’s.

Secondary Raynaud’s is more frequent than idiopathic Raynaud disease. Also, it is more likely to occur in both genders with an almost equal distribution.

The disorder progresses proportionally, affecting digits from both hands or feet in symmetrical manner. Over a period of time, recurrent and sustained spasms become more common.

The disorder progresses proportionally, affecting digits from both hands or feet in symmetrical manner. Over a period of time, recurrent and sustained spasms become more common. 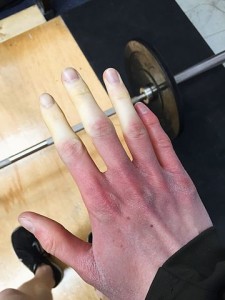 Image: “A good illustration of what Raynaud’s looks like” by Jmesy. License: CC BY-SA 4.0

It can occur both in our lower and upper limbs as well as the chin, nose, lips and ears. In occasional situations, low oxygen supply can result in the occurrence of necrosis.

The impacts are reversible, and they should be distinguished from the non-reversible origins of low blood supply, including thrombosis or vasculitis.

A deficit of vasodilators, mainly nitric oxide, has been suggested to be one of the causes of Raynaud’s phenomenon. Moreover, effective vasoconstrictors generally present in our endothelium (known as endothelin-1) have been observed to be flowing in elevated levels in people suffering from secondary Raynaud’s disease.

Discharge of the vasoconstrictor endothelin-1 is elicited by stimuli of vas activation, including transforming growth factor beta (TGF-beta), vasopressin and angiotensin.

Angiotensin has both pro-fibrotic and vasoconstrictive impacts.

In people suffering from systemic sclerosis, fundamental anomalies allied with vasculature fibrotic proliferation result in decreased blood flow toward the digits. This is a usual characteristic difference from the primary Raynaud’s disease.

Compromised vasodilation can also be part of Raynaud’s phenomenon. Calcitonin, an essential, gene-related neuropeptide, is released by nerves supplying the blood vessels. A lower amount of calcitonin-secreting neurons has been observed in a biopsy of skin samples of people suffering from systemic sclerosis and primary Raynaud.

Raynaud’s phenomenon is found to be linked with the below-mentioned intravascular abnormalities:

During an occurrence of Raynaud, the body withholds the flow of blood from the feet and hands, which causes them to feel numb and cold, thus turning them white or pallor. As the blood flow returns and the digits of the toes and fingers become hot and warm, they begin to turn red. This is followed by pounding and pain. On occasion, Raynaud can also affect the ears or nose.

The condition may manifest more frequently but last for short periods of time. Nevertheless, in some situations, it may occur for longer durations.

Diagnosis and Investigations of Raynaud’s Disease 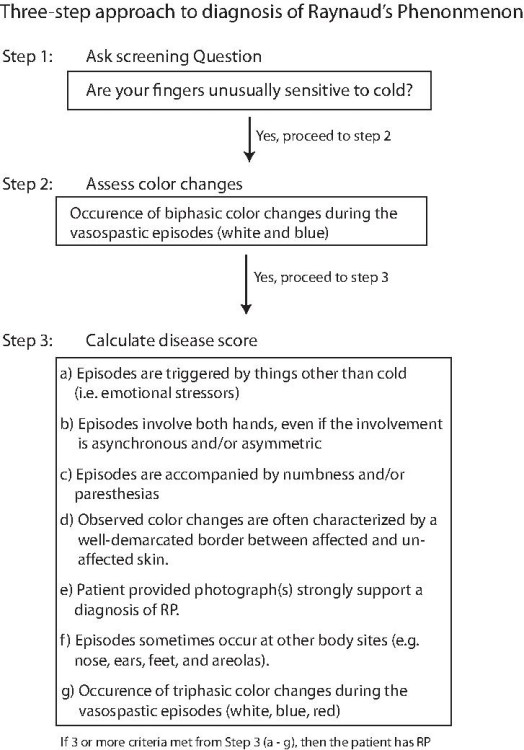 Diagnostic criteria for the primary Raynaud’s disease are mentioned below:

The subsequent challenge is to discriminate among primary and secondary causes of the ailment. For this, the physician can take a sample of the patient’s skin from the base of a fingernail to inspect it underneath a compound microscope. This technique is known as capillaroscopy. The physician will look for inflamed or abnormal capillaries, which could be a signal of the secondary illness.

A blood test might be essential, in order to see and examine the antinuclear antibodies and to assess the sedimentation rate of RBC’s. They both can expose problems related to autoimmune system or connective tissues disorders.

MRI scan is suggested in some of the cases to detect and treat rheumatologic disorders that may be associated with Raynaud phenomenon.

A treatment of Raynaud’s disease, to widen blood vessels and promote circulation, could be vasodilators, such as calcium channel blockers. These drugs have the effect to relax and open small blood vessels in the feet or hands, decreasing the severity and frequency of attacks in most people that are affected.

General measures to be taken

Sympathectomy is necessary when the illness obstructs the patient’s daily activities. Thoracic and cervical sympathectomy can give a short-term aid; on the other hand, lumbar sympathectomy is highly preferred as it gives an intense wide-ranging relief for a much longer duration.

Prognosis is usually favorable with little morbidity and no mortality. In very rare situations, however, the low oxygen supply in the affected part of the body can result in necrosis.

The prognosis for patients suffering from secondary Raynaud’s phenomenon is closely correlated to the underlying cause and disease. The prognosis for the patient’s digits depends on the extremity of the low oxygen supply and the efficacy of management.