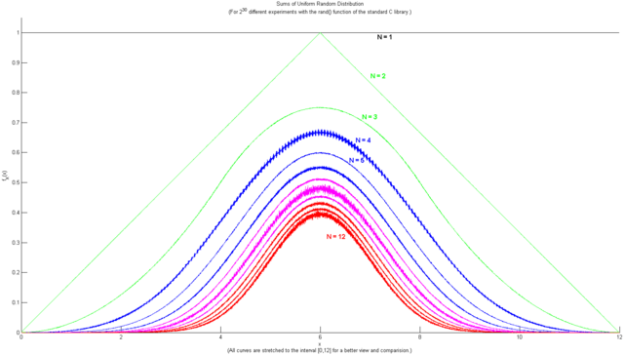 A random variable X is a real-valued function defined in a sample space, such that Bx, as described above, is an event for all x.

The set of values of a random variable is known as its sample space. For example, if we throw a dice, the possible outcomes are 1,2,3,4,5, or 6. One of these values is expected as a result of the event.

Example: An advertisement is on air 10 – 15 times a day on different channels. The audience can’t estimate or count the total time the advertisement will be on the air over 24 hours. It could be 10 minutes, 1 hour, or 10 hours.

If X can take any value in a set D that is countable, then X is said to be discrete. Usually, D is some subset of the integers, so we assume that any discrete random variable is an integer unless it is stated otherwise.

Example: A jar is filled with 10 red, 12 purple, and 5 blue marble pieces. The number of red marbles is countable, and the probability associated with it can be measured; hence, it is a discrete random variable.

Another example of a discrete random variable is the number of students present in a class. It is countable, and the probability associated with the presence of students can be measured easily with related formulas.

Furthermore, even within these two classes of a random variable, there are further subcategories. Here is a shortlist of some of them:

Indicator random variable. If X can take only the values 0 or 1, then X is considered an indicator. If we define the event on which X=1, A= {w: X(w)=1}, then X is said to be an indicator of A.

The expected value of these discrete random variables will be as follows:

The properties of the expected value of a discrete random variable include:

Let C be the constant

X be a random variable

With a constant, the expected value of a random variable will be as follows:

Suppose X and Y are two random variables. The expected value will be as follows:

With three constants (a, b, c) and two random variables (X, Y), the expected value can be calculated as follows:

The median is information about the “middle” value of the random variable: F(X) =0.5

Spread is the measure of similarity or a varied set of observed values for a particular set of data. The measures of spread include range, quartiles, and interquartile range.

A distribution’s spread (varied) has to be measured using a specific formula for standard deviation. To find out the standard deviation value, we have to measure the variance by using this formula:
Var (X) = Σ(x – E[X]) 2 P(X=x)

Using the above formula, the variance of a random variable of a dice roll will be:

If there are three constants (a, b, c) with two random variables (X, Y), the variance properties will be as follows:

Then the dice game’s variance and standard deviation with score (3X+ 2Y + 1) will be as follows:

Probability models are not always correct. The probability of data collection should be questioned to ensure accuracy. If, by mistake, a wrong or unsuitable probability model is selected during the research process, then the outcomes based on the model are wrong as well.

Mean and Variance of Linear Combinations. via onlinecourses.science.psu.edu