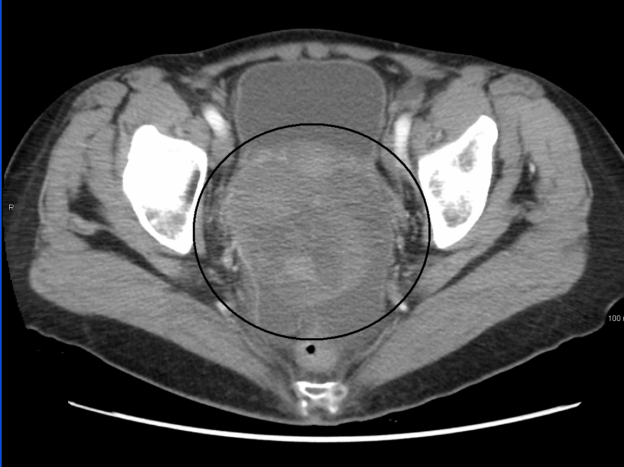 Primary ovarian tumors include the following:

Metastatic tumors can originate from the endometrium, breast, colon, and cervix.

Germ cell tumors are the most common type of ovarian tumors in children. Young adults with ovarian tumors can have either a germ cell or sex cord-stromal tumor. Middle-aged women and the elderly who develop ovarian tumors usually have epithelial ovarian cancer.

The presentation of ovarian tumors is often vague and symptoms involve abdominal pain or the presence of an abdominal mass. This condition has a protracted clinical course; thus, imaging studies are indicated for the initial examination of patients with suspected ovarian tumors. Ultrasonography is the imaging method of choice used to establish the malignancy risk index (RMI), together with the determination of CA 125 levels and postmenopausal status of the patient. High RMI scores are suggestive of malignant tumors and indicate the need for staging laparotomy. Surgery is still needed as a definitive treatment for benign tumors.

The staging of ovarian cancer is mainly based on surgical exploration (FIGO system) or the TNM system; however, computed tomography (CT) or magnetic resonance imaging (MRI) may be indicated for additional clarity.

The table below summarizes the main findings of ultrasonography used for ovarian tumor staging per the FIGO system.

Ultrasonography reveals a functional ovarian cyst to be anechoic and vascularized with thin, smooth walls.

Posterior acoustic enhancement is usually observed. Large cysts with reticular echoes might represent hemorrhage within a corpus luteum cyst. Such large and complex cysts should be followed-up using MRI.

Up to 80% of all cases of endometriosis involve the ovary, which is the most common site. These cysts are known as endometriomas; they are usually small and may have thin, thick, or irregular walls. Large endometriomas have been previously described and can have a diameter ranging from 15–20 cm.

In an ultrasound, endometriomas typically appear as a cystic mass with low-level echoes. Cysts that show diffuse low-level internal echoes, multilocularity, and hyperechoic wall foci are most likely endometriomas. CT scans should not be performed in a patient suspected to have an endometrioma owing to the high risk of a false-positive diagnosis of malignancy.

These tumors arise from ovarian germ cells and are more common in children and adolescents. They are usually asymptomatic and discovered incidentally during physical examinations of the pelvis for other indications. Ectodermal components are more common within these teratomas; hence, the term ‘dermoid cysts’ is occasionally used to describe them.

Epithelial tumors can be benign, borderline, or malignant. This classification is based on a histological examination, rather than imaging studies. Unilocular thin-walled cysts that do not have papillary projections are more likely to be benign.

Ultrasound presentations that are suggestive of malignancy include the following:

The most important radiographic finding suggestive of malignancy is the presence of papillary projections. These projections are better visualized using MRI. The presence of a thin, smooth, regular wall is usually not indicative of a malignant ovarian cyst.