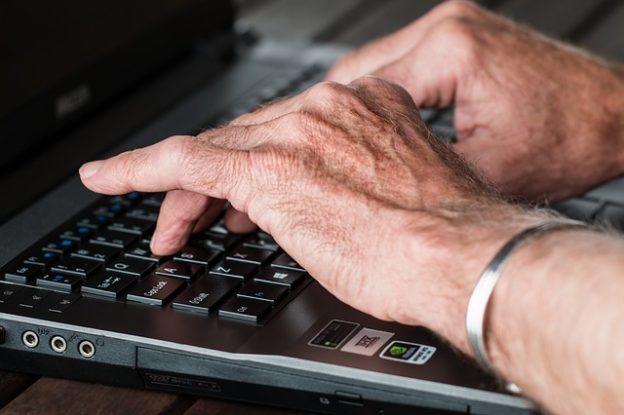 Image: Hands of an elderly person typing on a keyboard. By: stevepb. License: Public Domain

Arthritis refers to joint pain commonly associated with stiffness. It is not a diagnosis in itself but refers to a group of joint diseases. There are dozens of types of arthritis. The main 2 categories are inflammatory and non-inflammatory. Inflammatory arthritis is characterized by joint inflammation leading to erosion of the anatomical structures, usually caused by an autoimmune condition. Rheumatoid arthritis is a prime example of this type. Non-inflammatory arthritis comprises all causes of joint pain that are not associated with autoimmune conditions, including infectious, metabolic, and degenerative types of arthritis. A prime example of this type is osteoarthritis.

Bone erosion is characteristic of inflammatory joint conditions. Erosion appears as a focal discontinuity of the thin subchondral bone plate and is usually marginal.

A staphylococcal or streptococcal infection most commonly causes septic arthritis. The direct spread from a skin cut into the joint space or hematogenous spread are the 2 main routes by which microorganisms gain access to the joint space.

Radiographic features that indicate the likelihood of septic arthritis include:

When the joint effusion is quite large, the joint space may be widened. 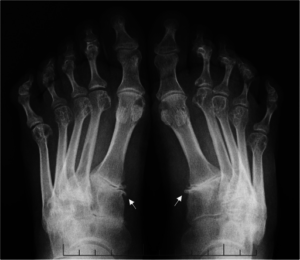 multiple joints at the same time.
The condition is more common in middle-aged women. Antibodies to cyclic citrullinated peptide are usually positive in rheumatoid arthritis. The positivity of these antibodies, along with the presence of the rheumatoid factor, is suggestive of autoimmune pathogenesis.

The involved joints are usually proximal. The most commonly involved joints in the hands are the metacarpophalangeal, proximal interphalangeal, midcarpal, and radiocarpal joints. Involvement is usually bilateral and symmetric (see image).

Calcaneal erosions and loss of the radiolucency of the triangle between the calcaneus and the Achilles tendon are also suggestive of rheumatoid arthritis and the formation of bursal fluid. This occurs because of bursa formation within the inflamed synovial sheets.

Involvement of the large joints is also possible. The knees, hips, and sacroiliac joints can present with radiographic features suggestive of inflammatory changes. Involvement of the C1-C2 vertebrae is also seen in rheumatoid arthritis. Erosion of the odontoid process and widening of the atlantodens interval are common findings suggestive of cervical spinal involvement in rheumatoid arthritis.

The degenerative joints can be damaged by osteoarthritis or by trauma, crystal deposition, neuropathy, or hemophilia hemarthrosis.

Joint involvement is also multiple but asymmetric. The main features of radiography are:

When a single joint is involved, the condition is very severe, or the patient is too young to develop osteoarthritis, the possibility of atypical osteoarthritis should be ruled out.

The most common causes of atypical osteoarthritis are trauma, crystal deposition, or the mechanical destruction of the bones by repeated minor trauma, as occurs in cases of peripheral neuropathy. 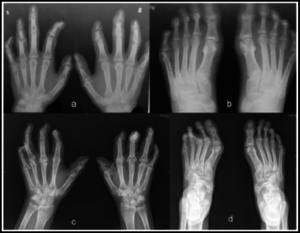 Image: A and B: Radiographs show arthritis in multiple small joints, with bone erosion, in both hands and feet. By: Ding WQ. License: CC BY 3.0

environmental factors and genetic predisposition in the individual. HLA-B27 is positive in up to two-thirds of psoriatic patients, strongly suggesting an autoimmune pathology behind the condition. The joint disease occurs in about 15% of patients.

A “pencil-and-cup” appearance of an involved joint is more common in seronegative spondyloarthropathies but is not specific to this condition. The distal involvement of the phalanges with sclerosis, enthesitis, periostitis, and soft-tissue swelling in the feet is specific for psoriatic arthritis (see image). This radiographic pattern is known as ivory phalanx.

Reactive arthritis is also known as Reiter’s syndrome. This sterile inflammatory arthritis follows an enteric or urogenital infection. Patients with reactive arthritis typically have urethritis and conjunctivitis, and are positive for HLA-B27.

Differentiation between reactive arthritis is largely dependent on the clinical history of the patient. Younger patients who present with arthritis-related symptoms after a urogenital or enteric infection are more likely to have reactive arthritis than psoriatic arthritis.

The formation of subchondral cysts and osteophytes within the head of the humerus is also seen in some patients with ankylosing spondylitis.