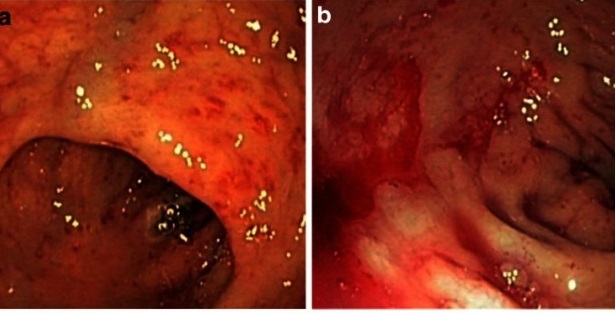 Colitis, inflammation of the colon, can be caused by a variety of etiologies. It is a common side effect of using radiation therapy when treating abdominal or pelvic malignancy, especially in the treatment of prostate cancer and ovarian cancer. An abdominal dosage greater than 1.5 Gray units may result in radiation colitis. The condition is grouped into 3 periods of time after the initial exposure: acute, late acute, and chronic.

Ionizing radiation damages the intra- and extracellular structures by ionizing molecules, radiolysis, and the formation of free radicals from the water. This results in damage to the cell membrane, organelles, and DNA. DNA damage includes double and single-strand breaks and dimer formation.

If a cell suffers sufficient to damage it may start apoptosis. The degree of injury is dependent on the total radiation dose and the amount of time the patient is dosed. A larger, quick dose of radiation has an increased risk of causing damage compared to several smaller doses, spaced out over several days or weeks.

Pathology and Pathophysiology of Radiation Colitis

Acute radiation-induced damaged is characterized by plasma cell and polymorphonuclear infiltration of the lamina propria, mucosal atrophy, and submucosal edema. Apoptosis and cell lysis are common throughout the epithelial layer. Severe submucosal damage increases the risk of developing ulcerations. During the late acute phase, the mucosa is restored and repopulated.

Chronic radiation colitis shows submucosal fibrosis, endarteritis, and lymphoid atrophy. These changes are progressive over months and years. Vascular changes may lead to mucosal ischemia, ulceration, bowel perforation, necrosis, and malabsorption. Fibrosis of the connective tissue may result in contracture and obstruction.

A history of radiation treatment followed by most symptoms of radiation colitis is expected. These symptoms should steadily improve over time. The aggressive investigation is usually reserved for chronic symptoms. However, hematochezia or symptoms of obstruction should be aggressively evaluated because surgery may be required.

A complete blood count may be useful to establish anemia in chronic radiation colitis due to blood loss and malnutrition. Other assays are available to evaluate intestinal absorption. These tests include:

There are two reasons to evaluate the colon directly by visualization (colonoscopy) or by imaging (CT, MRI) and those are the obstruction or a lower GI bleed. If a patient has minor symptoms of enteritis and appears to be improving, then these tests are unnecessary. However, severe radiation colitis with an active bleed may require visualization and treatment. Radiation damaged mucosal tissue is inflamed and friable. Submucosal telangiectasias are often visible in cases of chronic disease. 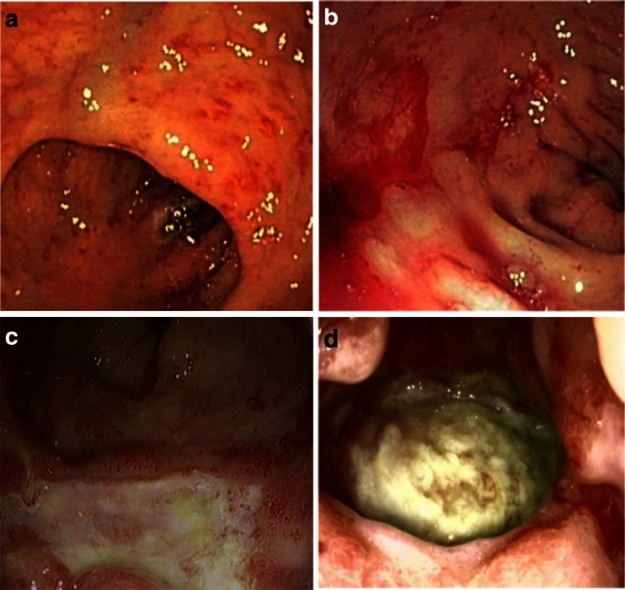 Most patients respond to conservative treatment, however, some patients with recurring symptoms may require surgical intervention. Several protective measures can be enacted before radiation treatment to minimize damage to the colon.

Treating the symptoms of colitis while the body recovers may reduce healing time and improve the patient’s quality of life.

Some hemorrhage treatment can be performed via colonoscopy with the use of argon plasma or formalin. Both treatments are usually well tolerated.

Surgical treatment is reserved for refractory and the most complicated cases including obstruction, fistulas, hemorrhages, and perforations. Surgical options include resection and diversion (colostomy).

Progression and Prognosis of Radiation Colitis

Radiation therapy is a mainstay of abdominal and cancer treatment. Its role is growing to include preoperative and postoperative therapy. It is a very effective tool and greatly reduces cancer mortality and morbidity. Radiative colitis is an unfortunate and severe side effect. Most patients recover with minimal medical intervention but some require surgical treatment and in a small fraction surgery is insufficient to prevent mortality.

Abayomi J, Kirwan J, Hackett A. (2009). The prevalence of chronic radiation enteritis following radiotherapy for cervical or endometrial cancer and its impact on quality of life. Eur J Oncol Nurs. 13(4):262-7.