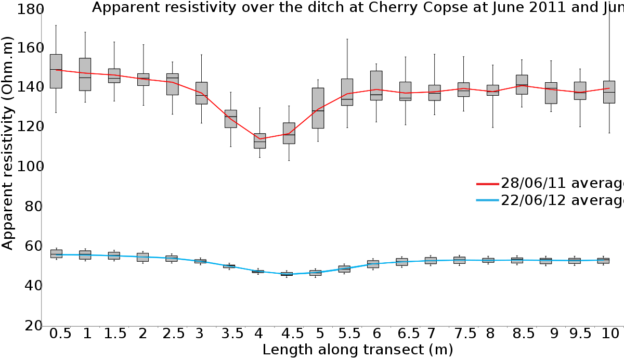 Image: “Apparent resistivity of ditches at Cherry Copse in both June 2011 and June 2012 shown in a box plot.” by Robert Fry, The University of Bradford, DART Project – Own work. License: CC BY 3.0

Variables are values which can be changed situation to situation in data. Quantitative variables provide a measurable value which is countable, e.g. we have taken a herd as data which means we have considered the number of sheep. The number of sheep in the herd is a measurable quantity, hence the variable is quantitative. Normally, three kinds of graphs are used for statistical representation i.e:

Example: To make a histogram from continuous variables, there is a need to first divide the whole data into intervals. Each interval is known as a bin. The data taken for the example comprises of the following age numbers:

Histograms can be based on relative frequencies instead of actual frequencies.

Histograms based on relative frequencies show the proportion of scores in each interval rather than the number of scores. In this case, the Y-axis runs from 0 to 1 (or somewhere in between if there are no extreme proportions).

You can change a histogram based on frequencies to one based on relative frequencies by (a) dividing each class frequency by the total number of observations, and then (b) plotting the quotients on the Y-axis (labeled as proportion).

The percentage can be calculated as follows:

Percentage of each frequency = frequency number/sum of frequency ×100

Stem and leaf plot is the simplest method of statistical distribution. In this model of presentation of data in a graphical form, the stem is known for a bunch or bin having so many more numbers as subset. Here, a range is considered as stem e.g. 1-10 and subset numbers i.e. 2,3,4,5,6,7,8 and 9 are taken as a leaf.

The difference between histogram and stem and leaf plot 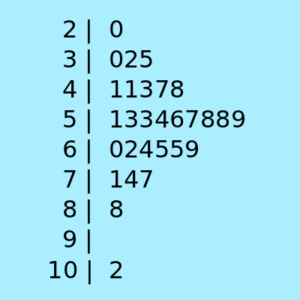 Characteristics of a Distribution

There are several factors which are required to be observed for the distribution of quantitative variables of data. These factors are as follows:

Shape of the distribution

It depicts the tendency of data to skew, its number of peaks, its uniformity and the possession of symmetry involved.

Symmetric (U shaped): This shape of distribution forms a self-mirror image when it reflects in its vertical center line like below graph.

It is the peak value of quantitative variable distribution through a histogram. The histogram has three kinds of peaks or modes.

The Center of a Distribution (Finding Middle Ground)

The median of data can be calculated through the following steps:

There are 25 observations. The correct sequence of data is as follows:

After arranging data in sequence, the value in median position by using formula comes out.

Spread of a Distribution

The third characteristic which has to be considered while observing the distribution of a quantitative variable data set is spread. It shows how spread out a distribution of data is, or how it varies in its occurrence. The spread of distribution comprises of a range of the data set.

The difference between maximum and minimum values of a data set is known as a range. i.e.

Suppose a data set comprises of the following values:

In the data, the highest value is “85”, whereas the lowest or minimum value is “23”. By using the formula, the range of the data set is:

Problem: The spread of distribution can only be measured by using the range method when the data value has limitations or boundaries. If a variable has a critically low or high data limit, in that case spread can be measured by using range. Range can detect errors only while data is entered. If there are extreme values in data, it makes range very large and critical to be calculated. In case “29” value is mistakenly entered as “299”, the range can critically deviate i.e.

2. Interquartile range (focusing on the middle of the data)

This range comprises of 3 quartiles or division of data set in order to measure the variability of the dataset. This kind of range has the ability to ignore extreme values and describe the spread of distribution in a clearer way. The step to measure interquartile range comprises of:

As 12 observations are given, in this case, median comes out an average of 6th and 7th value. The lower quartile can be calculated by using the above-given instructions as follows:

Hence, using the values of upper and lower quartile, the interquartile range can be measured as follows:

The five number summary of center and spread distribution comprises of:

A box plot is a type of interquartile range. A data set can be presented graphically using box plots. A five number summary can be displayed with a box plot model by using the following steps:

If we calculate the numerical value IQR, keeping in view the five number summary for the box plot, we have no extreme values.

Fences in this example are:

Shapes of Distributions via mathbitsnotebook.com

Statistics How To via statisticshowto.com