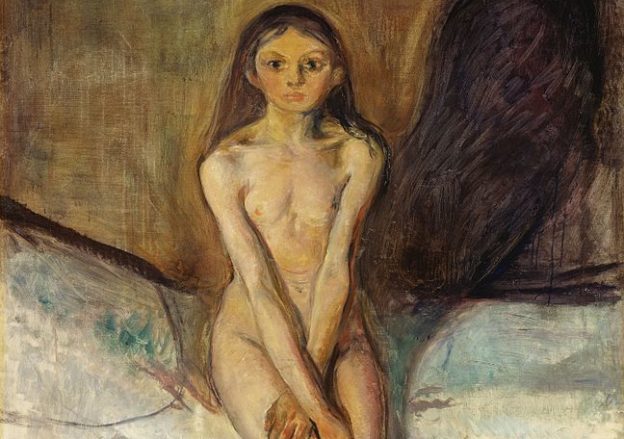 At the beginning of puberty, the zona reticularis of the adrenal glands secretes androgens (e.g., DHEA), resulting in adrenarche. Concurrently, the arcuate nucleus in the hypothalamus secretes GnRH in a pulsatile manner, causing the release of luteinizing hormone (LH) and follicle-stimulating hormone (FSH) from the anterior pituitary gland. LH and FSH work on various reproductive organs to induce gonadarche.

In females, LH acts on the ovary’s theca cells to convert cholesterol to androgens. A nearby granulosa cell, regulated by FSH signaling, converts those androgens to estradiol. Estradiol acts on various organs to complete puberty.

In males, LH acts on the Leydig cells to convert cholesterol to testosterone. While the mechanism of puberty via the hypothalamus-pituitary-gonadal axis is well understood, less is known about the factors that control the age of pubertal onset.

The sequence of male puberty

Males tend to begin puberty between 10 and 13 years old. After adrenarche, the scrotal skin thins, and the testes grow. The testicular length is 2.5 cm or more, and the volume of testes is 4 ml or more at the onset of male gonadarche. The testes enlarge from the growth and maturation of seminiferous tubules. Acne, facial hair, and slight alteration of the voice (hoarseness) are seen.

Next, pubarche begins in conjunction with penile enlargement. The last stage is a dramatic increase in growth velocity. Testicular enlargement that does not start before age 14 indicates delayed puberty, and any sign of puberty before age 9 indicates precocious puberty.

The sequence of female puberty

Females, on the other hand, usually begin puberty earlier, between 9 and 12 years of age. Since the ovaries are located internally, female gonadarche is clinically measured by thelarche.

Enlargement of the clitoris indicates the significant androgen excess. Vaginal mucosa will be deep red. Breast enlargement with increased estrogen is a clear sign of puberty.

Thelarche is tracked and recorded using the Tanner staging system. Menarche begins about 2 to 3 years after thelarche and pubarche begin, but this time may vary. When breast development begins at age 9, menarche generally follows in about 2.8 years.

In contrast, when breast development begins at age 12, menarche occurs after 1.4 years on average. Lack of thelarche at 13 years old indicates delayed puberty, and thelarche before the age of 8 indicates precocious puberty.

Benign premature thelarche is isolated early breast development. If there are no other symptoms of puberty, no testing is required, and the parents and patient only need reassurance and observation as treatment. Similarly, benign premature adrenarche does not need testing if it is an isolated finding.

Precocious puberty refers to the development of secondary sexual characteristics before the age of 8 in females and 9 in males. Studies show that the age of onset of puberty is earlier in American females today than it was the same population in the 1930s, making precocious puberty a relevant topic.

Precocious puberty can create some problems, like early growth spurts. However, because of early bone maturation, linear growth can cease early, so it can cause short stature.

Other factors that are correlated with the earlier onset of puberty in females are low birth weight, obesity, international adoption, and absent father. While the age of onset is earlier, the onset of menarche has not changed significantly. It is essential to diagnose and treat precocious puberty because children with untreated precocious puberty tend to be much shorter in adulthood and have poor psychosocial well-being.

Causes of precocious puberty may be central (central nervous system) or peripheral (gonads, adrenal glands, etc.). Central precocious puberty is a GnRH-dependent process that is caused by early activation of the hypothalamic-pituitary-gonadal axis.

This results in elevated LH and FSH, as well as elevated testosterone or estradiol. The child undergoes the typical sequence of puberty, as described above. These children will have typical secondary sex characteristics, advanced bone age, and increased sex steroids. The following are causes for central precocious puberty:

In contrast, peripheral precocious puberty, a GnRH-independent condition, occurs from a surge of sex steroids without hypothalamic-pituitary-gonadal activation. GnRH, FSH, and LH values tend to be suppressed or consistent with prepubertal values. Sex steroids tend to be high or consistent with pubertal concentrations. The child may not undergo the typical sequence of puberty.

McCune-Albright syndrome is the most common cause of peripheral precocious puberty. It occurs more frequently in females than in males. This syndrome is characterized by bone malformations, café au lait spots, and ovarian hyperfunction, resulting in episodic estrogen secretion. It may also be accompanied by hyperthyroidism or acromegaly. Girls with McCune-Albright syndrome complete puberty rapidly, with menarche occurring only a few months after breast development.

Adrenal adenomas and carcinomas may also secrete androgens or estrogens, leading to precocious puberty. Any hCG-secreting tumor, such as a dysgerminoma, stimulates the secretion of LH and, subsequently, testosterone in males.

One genetic cause of precocious puberty is GnRH-independent sexual precocity. Males may have this X-linked dominant disorder that causes premature Leydig cell maturation, resulting in high testosterone levels. Other conditions that cause peripheral precocious puberty are ovarian cysts, congenital adrenal hyperplasia, and exogenous steroid exposure.

In addition to taking a history of symptoms, ask about the history of precocious puberty in family members, signs of a neurological condition in the patient (large head circumference, headaches, visual changes or seizures), and signs of the stages of puberty (breast development, testicular enlargement, body odor, pubic and axillary hair).

Finally, investigate whether the child has had any exogenous exposure to sex steroids. A thorough physical examination should include Tanner staging, analysis of the growth chart to determine if there was a recent increase in growth velocity, a skin examination for café au lait spots, and a neurological exam.

Also, clinicians should look for the effects of estrogens, such as breast development, menarche and virilization in females, and testosterone, such as deepening of the voice and enlarged testes in males.

The most important values to measure for precocious puberty are the hormones involved in puberty. Testosterone, estradiol, DHEAS, and androstenedione can be measured directly. GnRH, LH, and FSH can be highly variable and very difficult to measure, so the gold standard for measuring gonadotropins is the GnRH stimulation test. In this test, GnRH is injected into the child, and the LH and FSH levels are measured.

Before puberty, GnRH primarily stimulates FSH, but after puberty, it stimulates LH. After the GnRH is injected, the LH and FSH levels will indicate whether the hypothalamus-pituitary-gonadal axis is operating on a pre-pubertal or pubertal system.

The direct hormone measurement and the GnRH stimulation test will determine whether the cause is central or peripheral. Further investigations may include hand X-ray for bone age, ultrasound to reveal a gonadal cyst or tumor, MRI if a brain tumor is suspected, serum hCG if a hamartoma is suspected, and serum 17-hydroxyprogesterone if congenital adrenal hyperplasia is suspected.

Treatment depends on the cause of precocious puberty. All malignancies should be treated with appropriate surgical, chemo- and radiotherapy. Central, progressive precocious puberty can be treated with a continuous release of GnRH. The constant release (instead of the physiologic pulsatile release of GnRH) will suppress LH and FSH secretion, shutting down the hypothalamic-pituitary-gonadal axis.

Treatment for McCune-Albright syndrome may include antiandrogen agents, antiestrogen therapy, such as tamoxifen, and a progesterone implant. Ovarian cysts should be treated with a progesterone implant, which inhibits steroid genesis and causes the regression of the cyst. Familial GnRH-independent sexual precocity can be treated with antiandrogens.

Delayed puberty in males is the lack of testicular enlargement by 14 years old, and for females, it is diagnosed by a lack of breast development at 13 years old. Approximately 2.5% of healthy children experience delayed puberty.

Constitutional delay of growth and puberty

The most common cause of delayed puberty is the constitutional delay of growth and puberty (CDGP). In CDGP, the period of decelerated growth before the pubertal growth spurt is prolonged, resulting in a significant bone age delay. Puberty will commence in these children when the bone age reaches 12 years old in boys, and 11 years old in girls.

Some claim that CDGP is inherited in an autosomal dominant pattern. Even though CDGP is the most common cause, it can only be diagnosed after a thorough investigation eliminates other pathological causes.

Overview of causes of hypogonadism

In addition to obtaining a detailed history of growth, ask about delayed puberty in parents and siblings, history of chronic disease, cryptorchidism, and history of malignancy treated with chemotherapy and radiotherapy. Assess nutrition status and cognitive development.

After obtaining the patient’s history, observe height percentile, weight percentile, and growth velocity. If growth velocity is less than 3 cm per year, suspect an underlying endocrine that inhibits growth (e.g., hypothyroidism). Obesity in boys is associated with a delay in the onset of puberty. Encourage weight loss in these patients.

Also, the scrotal skin should be observed for signs of darkening. In females, breast tissue should be evaluated by having the child lay in the supine position. Finally, the presence of signs of Turner syndrome – arched palate, cubitus valgus, and short fourth metacarpals – should be noted.

FSH is not as reliable as LH in predicting the onset of puberty. Lower FSH values in the background of delayed puberty indicated hypogonadotropic hypogonadism, and elevated FSH also suggests primary gonadal failure.

Estradiol or total testosterone should also be drawn to assess gonadal function. GnRH-stimulation test may be done if the clinician is uncertain whether puberty has commenced. CDGP and hypogonadotropic hypogonadism have a pre-pubertal response.

IGF-1 should be drawn to assess for growth hormone deficiency, and TSH should also be ordered to check the thyroid. To rule out chronic disease, order a CBC, ESR, creatinine, electrolytes, bicarbonate, alkaline phosphatase, albumin, thyrotropin, and free T4.

An X-ray of the hand would assess bone age. One of the criteria for CDPG is a bone age delay of greater than two years, but this is not specific to CDPG. Delayed bone age is also seen in children with gonadal failure, hypogonadotropic hypogonadism, and children with chronic illness.

If a tumor is suspected, prolactin and hCG levels may aid in diagnosis. The child should only have an MRI if there is a strong suspicion of a lesion. An MRI should be deferred until age 15, if possible. If a genetic cause is suspected, conduct genetic testing. A celiac screen may be conducted at the clinician’s discretion.

As CDGP is a standard variant of puberty, children can be treated with observation and reassurance. Parents and children should be counseled to have realistic expectations of adult height. Children with CDGP are at risk for low bone density and should be given calcium supplementation.

Upon request, males may be treated with testosterone for four to eight months to accelerate the onset of puberty via bone maturation. Aromatase inhibitors may increase adult height and initiate puberty.

Females may be treated with estrogen, although no clear benefit to this therapy has been proven. Females should also undergo a workup for primary amenorrhea before a diagnosis of CDGP is made.

Girls with Turner syndrome benefit from growth hormone supplementation to promote standard adult height. Cyclic estrogen/progesterone is used for secondary sex characteristics. These children may achieve pregnancy with in vitro fertilization and a donated ovum.