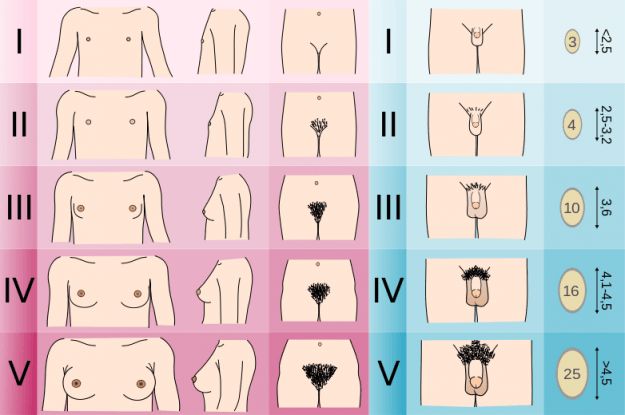 The word puberty derives from the Latin word pubertas and means sexual maturity. It covers the period of time from the first appearance of secondary sexual characteristics until achieving full fertility.

Over the years, the median age at the onset of puberty has decreased. The average age of a girl’s menarche is 12.8 years, and the average onset of boy’s voice change is 13.5 years. In general, the point in time varies from individual to individual and depends on various factors (e.g., nutrition, environment, and climate).

A shift in the composition of body tissue also takes place. Girls develop more fat tissue, and boys develop more muscle tissue. Sex hormones furthermore have an impact on the skeleton, which makes it possible to link sexual maturity and bone age. These can be evaluated by an X-ray of the core of the bone of the wrist, elbow joint, or knee.

Stages of development of breast, pubic hair and genitals during puberty

According to Tanner, the development of the female breast, as well as pubic hair growth and development of male genitals, can be organized in the following way:

Precocious puberty is the onset of puberty with the development of external sexual characteristics before reaching 8 years old. Precocious puberty can create some problems. For instance, because of the early maturation of bones, an early growth spurt can end linear growth early and cause short stature.

Factors that are correlated with the earlier onset of puberty in females are low birth weight, obesity, international adoption, and an absent father. While the age of onset is getting younger, the onset of menarche has not changed significantly. Precocious puberty is important to diagnose and treat because children with untreated precocious puberty tend to be much shorter in adulthood and have poor psychosocial well-being. If precocious puberty starts before the age of 6, then there is abnormal brain imaging in 20% of girls. If it starts between ages 6–8, then abnormal imaging of the brain is only 2%.

True precocious puberty has to be distinguished from precocious pseudopuberty. The cause of the former is either premature or excessive gonadotropin secretion by the pituitary gland or hypothalamus, which can have idiopathic reasons or can be caused by other factors, such as tumors in the central nervous system (CNS), traumas, or primary hypothyroidism. In the case of precocious pseudopuberty, sex hormones are pathologically increased without a rise in gonadotropin. Reasons for this may include tumors in the ovaries or adrenal cortex, as well as an iatrogenic influx of estrogens. Another example of precocious puberty is congenital adrenal hyperplasia.

The breast development starts prematurely, the onset of growth of pubic and armpit hair starts and menarche comes early. Another sign is rapid growth during early stages with the early lock of the epiphysis and therefore reduced final height. 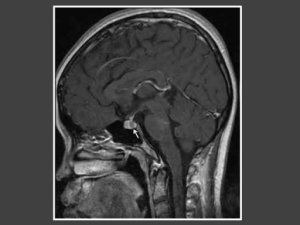 A detailed anamnesis should be taken, and patients must be examined clinically. This should include sonography in order to evaluate inner sexual characteristics and classification of the external sexual characteristics according to Tanner stages. Furthermore, endocrinological diagnostics should be performed to distinguish central genesis from peripheral genesis. Precocious pseudo-puberty, unlike true precocious puberty, is associated with high levels of sex hormones, while the level of gonadotropin is low. In addition, a neurological examination should be carried out, followed by a magnetic resonance (MR) or computerized tomography (CT) scan to show central genesis.

Primary treatment includes treating the underlying genesis of the disease. Administering gonadotropin-releasing hormone (GnRH) analogs suppresses the endogenous forming of gonadotropins due to receptor-down-regulation, which results in less secretion of sex hormones.

If gonadal suppression treatment starts before bone maturation, then normal height can be achieved.

The counterpart to precocious puberty is delayed puberty, in which the onset of puberty is later than usual. This means that there is either no onset of the development of secondary sexual characteristics until the 14th year of life or no menarche until the 16th year of life.

In cases of delayed puberty, anamnesis and clinical examination should be performed in a timely manner. In addition, a chromosomal analysis should be performed to exclude Ulrich-Turner syndrome. Furthermore, determining bone age might indicate sexual maturity. Hormone levels need to be determined endocrinologically, and radiological inspection of the CNS can be useful.

The first priority is excluding possible causes of the disease. Furthermore, estrogens and gestagens should be administered.