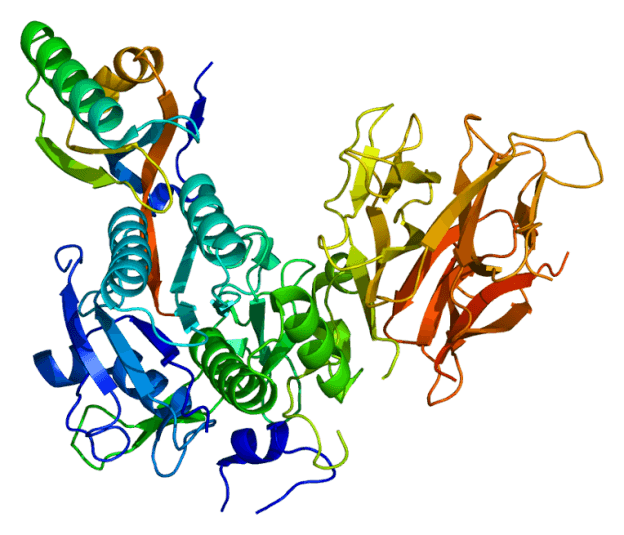 As you may have known by now, triglycerides and other forms of lipids are nonpolar in nature. This means that by themselves, they would have some difficulty in traveling along with the polar intravascular and interstitial spaces; this is where lipoproteins come in.

Lipoproteins take a variety of forms when functioning inside our body. Their classification actually depends on the proportions of their compositions.

Chylomicrons: Lipoproteins belonging to this group are the largest among all the lipoproteins and this is due to the number of triglycerides they contain. Chylomicrons carry exogenous (dietary) fats coming from the intestines into the liver via the lymph and the bloodstream.

Very-low-density lipoproteins (VLDL): VLDL are synthesized in the liver and carry triglycerides from there to the peripheries. There, the lipids are either metabolized for fuel or stored as adipose tissues. VLDL is second to chylomicrons when it comes to density and size.

Low-density lipoproteins (LDL): These lipoproteins come into being once a certain amount of triglycerides are taken out of VLDL. Cholesterols in the body, along with other lipids, are primarily carried by LDL. This lipoprotein is a significant indicator of hypercholesterolemia and is therefore usually screened in routine workups.

High-density lipoproteins (HDL): Unlike the rest of the lipoproteins, HDL actually carries lipids in a reverse route. Instead of delivering triglycerides and cholesterols to the peripheries, they somewhat ‘clean up’ the peripheries from excess lipids and carry them back to the liver for metabolism or excretion.

Lipoproteins vary in the way that they are synthesized in the body. For instance, chylomicrons are synthesized in the endoplasmic reticulum of the absorptive cells lining the intestines, while VLDL are secreted from the hepatocytes. Although they have different places of origin and directions of lipid delivery, they actually have similar compositions, functions, and process of formation.

As mentioned earlier, LDL are products of the triglyceride depletion of VLDL. This explains how some treatments directed solely to address hypertriglyceridemia cause a ‘beta shift’ phenomenon where, in an increase in the plasma, LDL follows after a decrease in triglyceride levels in the body. Aside from this, VLDL degradation also produces VLDL remnants (IDL) which are taken up by hepatocytes, ready for metabolism and excretion.

HDL derive their apoprotein content from the liver and the intestines. As for their hydrophobic core, HDL forms it by getting lipids from the surface monolayers of VLDL and chylomicrons while lipolysis is going on. HDL also get a significant amount of lipids, especially cholesterol from those lying around the peripheries and carry them back to the liver. The transfer of cholesterol to hepatic receptor cells, in exchange for substances needed for HDL structure maintenance, can occur in a direct or indirect method, the first involving endocytosis. 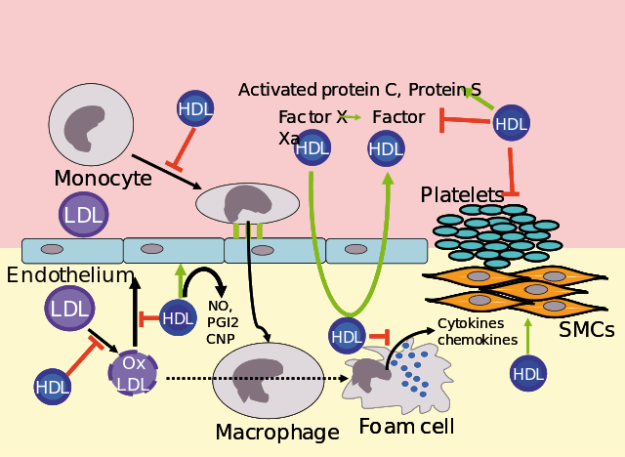 In under an hour, chylomicrons and VLDL can easily be eliminated from the bloodstream. This is made possible with the help of lipoprotein lipase or LPL. This enzyme is found in various locations in the body, including the walls of the blood capillaries, the heart, liver sinusoids, lungs, and spleen, among many others. However, the most active of these are the ones found in the endothelium of capillaries. LPL in the liver is also responsible for the degradation of chylomicron remnants and HDL.

Hydrolysis is the main feature or LPL. It hydrolyzes lipoproteins in the presence of cofactors, such as phospholipids and apo C-II. Once triglycerides are liberated from this process, it is further hydrolyzed into free fatty acids and glycerols which can either go to storage in adipose cells or for use in tissues that require ketone for energy, such as the heart. The location of the LPL also dictates the predisposition of fatty acids to metabolism or storage. For example, LPL found in the heart has a high affinity for triglycerides which explains why fatty acids from triglyceride metabolism, during starvation, are redirected to the heart.

LDL, on the other hand, is metabolized in cells containing an LDL receptor. This receptor is specific for LDL as it detects apo B-100, an apoprotein unique to this lipoprotein. The majority of this degradation occurs in the liver, while a certain degree occurs in extrahepatic tissues.

LDL receptors, however, do not exist indefinitely. After functioning for some time, they are eventually degraded by proteins. One of these includes the enzyme proprotein convertase subtilisin/kexin type-9 or PCSK9. PCSK9 works by binding to the LDL receptor, causing the receptor to undergo a series of changes leading to an eventual degradation. Without these receptors, cells capable of metabolizing LDL would not be able to do such.

HDL is metabolized by the help of class B receptor B1 (SR-B1) in the liver and other extrahepatic tissues that might use the cholesterol contained in the lipoproteins for hormone synthesis. SR-B1 receptors have high affinity to apo A-I, the distinct apoprotein found in HDL. Once SR-B1 bind to HDL, these empty the lipoprotein of its contained cholesterol and use it for steroidogenesis, or excrete it as bile salts.

This group of disorders could be categorized into either primary or secondary.

Primary dyslipidemia is the ones that are usually not associated with external causes and may be brought about by single-gene mutations that could alter lipoprotein synthesis or degradation. Examples are listed on the table below:

Secondary dyslipidemias, on the other hand, are manifested as imbalances in the plasma levels of triglycerides and lipoproteins as a result of poor diet, co-existing diseases or concurrent intake of other medications. Other more specific examples of causes may include:

The goal of treatment for patients having dyslipidemia is usually directed towards the prevention of more serious diseases such as cardiovascular events and pancreatitis. In order to reach and maintain this, lifestyle modifications and thorough meal planning are instituted early in the diagnosis. More often than not, patients are also prescribed with pharmacologic modalities that are designed to suit the type of dyslipidemia and the concurrent risks that they have. 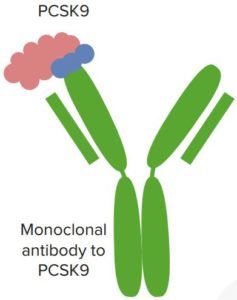 The relatively new PSCK9 inhibitors are essentially monoclonal antibodies designed to ultimately reduce the circulating levels of LDL in the plasma. These inhibitors work by binding to free-floating PCSK9 in the bloodstream, keeping them binding to active LDL receptors in the liver and in extrahepatic tissues, and degrading them.

With this mechanism, cellular endocytosis of LDL is continued and LDL receptors are continually recycled for use. When taken with HMG CoA reductase inhibitors which are medications designed to inhibit cholesterol synthesis, PCSK9 inhibitors can be very effective in controlling the lipid levels of patients with problems in lipid metabolism. This drug is given subcutaneously once or twice a month.

PCSK9 inhibitors are eliminated in the body by either of two ways: by the linear, non-specific clearance pathway in the reticuloendothelial system, or by a nonlinear, saturable clearance pathway. Since this medication is made up of antibodies which constitute a relatively large structure, it cannot pass through the renal tubules and are subsequently not eliminated through the kidneys. 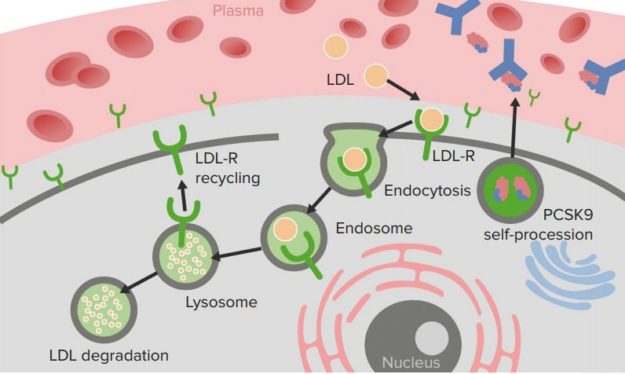 These medications have only been FDA-approved in the year 2015. More research is underway to measure their effectiveness in controlling dyslipidemias, and their efficiency in decreasing the patients’ risk for complications such as cerebrovascular accidents and ischemic heart disease.

Usually, patients having trouble controlling their cholesterol and LDL levels for a variety of reasons are first prescribed with HMG CoA reductase inhibitors or statins. Although a lot of patients demonstrate therapeutic drops in their plasma lipid levels, this may not be true to all. Others also report some side effects associated in taking this drug. For this reason, PCSK 9 inhibitors are developed in order to be prospectively prescribed alone, or with statins, and to reduce the required dosage of the latter. In fact, there have already been clinical trials proving that lipid control is more efficient when statins are taken with PCSK9 inhibitors, than when statins are taken alone.

Side Effects and Precautions

Since PCSK9 inhibitors are essentially made up of monoclonal antibodies, the possibility of allergic reactions should be anticipated in susceptible individuals. Although generally well-tolerated by most of the subjects in clinical trials, some patients have reported minor signs and symptoms experienced while taking the medication. These include soreness at the injection site, itching, nasopharyngitis, joint pain, neurocognitive manifestations, and flu-like symptoms.