pRTA and Combined Proximal and Distal RTA in Children | Lecturio 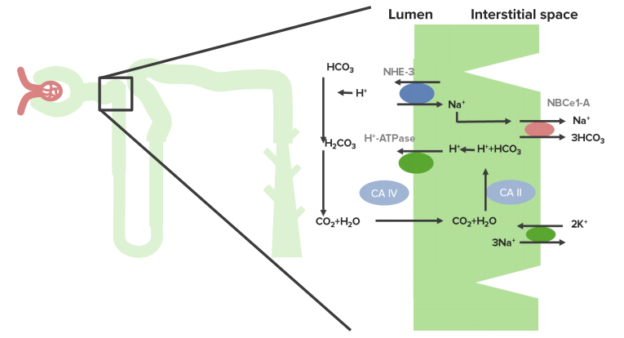 Renal tubular acidosis is a group of disorders characterized by the failure of kidneys to reabsorb the bicarbonate ion and excretion of hydrogen ion resulting in acidosis and hypokalemia.

Proximal RTA, also called RTA type 2, is characterized by an impaired proximal tubular acidification mechanism in the kidneys, which is due to a reduced reabsorption of HCO3– in proximal tubules. Term RTA type 3 is used when features of both type 1 and type 2 RTA are present.

The exact prevalence of RTA type 2 and type 3 are unknown. It may occur as a single entity or a part of a generalized dysfunction (e.g. Fanconi’s syndrome). Isolated primary proximal RTA is rare. Type 3 RTA is extremely rare.

Remember, conditions that can cause both proximal RTA and distal RTA include amyloidosis, multiple myeloma, medullary cystic disease, renal transplant rejection, and ifosfamide.

Important renal mechanisms for maintaining acid-base homeostasis include reabsorption of filtered HCO3– and excretion of nonvolatile acids. Normally, 85—90% of HCO3– is reabsorbed in proximal tubules and distal segments cause acidification of urine by the reclamation of the remaining HCO3– and by active secretion of H+ in the form of titrable acid, NH4+, and free ions.

Hypophosphatemia and phosphaturia contribute to rickets. Bone mineralization without rickets may also be seen.

In Fanconi syndrome, due to a generalized PCT defect, there is a urinary loss of bicarbonate, low-molecular-weight protein, uric acid, glucose, phosphate, citrate, calcium, potassium, and amino acids.

Children with proximal RTA may be asymptomatic or they may present with symptoms like polyuria and polydipsia. Muscle weakness, fatigue, hypotonia, and constipation may be present due to hypokalemia. Anorexia, vomiting, and dehydration may also be present. Low normal blood pressure is seen due to hypovolemia.

Refractory rickets or osteomalacia is often present, which may be associated with pathological fractures, bone pain, growth retardation, and osteopenia. Growth retardation and a failure to thrive may be seen in children. Unlike distal RTA, nephrolithiasis is absent in proximal RTA.

If associated with the specific syndrome, additional signs and symptoms of the syndrome are present.

A hallmark of RTA is non-anion gap metabolic acidosis (NAGMA) or hyperchloremic metabolic acidosis. Important laboratory findings in proximal RTA are low serum HCO3–, hypokalemia (although less severe than that in distal RTA), and variable urinary pH. There may be increased or normal excretion of calcium, citrate, or phosphate in the urine, while there may be decreased or normal excretion of NH4+ in the urine. Serum calcium and serum phosphate are normal. (High-yield information.)

Urine pH more than 5.5 suggests a renal acidification defect when the pH is measured in a fresh early morning urine sample.

On performing an ammonium chloride acid loading test, urine pH decreases to less than 5.3 in proximal RTA, which helps to differentiate it from distal RTA.

In proximal RTA, the measurement of urine pH after administration of furosemide also shows a decreased urine pH; however, there are high rates of false-positive and false-negative results in this test.

In proximal RTA, the goal of treatment is to increase serum HCO3– to as close to normal as possible; however, this is usually difficult because of increased bicarbonaturia, polyuria, and hypokalemia associated with bicarbonate administration, due to decreased bicarbonate tubular maximum.

Due to a massive loss of bicarbonate, children with proximal RTA require higher (as high as 10-20 mEq/kg/day) and more frequent doses of oral alkali, in the form of sodium bicarbonate or sodium citrate solution.

Thiazide diuretics are useful in the treatment of proximal RTA as they induce mild volume depletion, enhance proximal reabsorption of sodium, and therefore secondarily enhance the reabsorption of HCO3–.

Progression and Prognosis of Renal Tubular Acidosis Type 2 and 3

In proximal RTA, although improvement in growth and reduced severity of bone disease are observed with the correction of acidosis, the overall improvement is less impressive in children. Patients with systemic illness experience significant morbidity. Hyperchloremic acidosis is considered to be a risk factor for the development of acute kidney injury (AKI) following abdominal surgery.