The main characteristic and important feature of the proximal convoluted tubule is its apical brush border or striated border. The luminal surface of the tubule is densely covered with microvilli to increase the absorptive capability and surface area. It is easily visible under the light microscope and hence is given the name brush border. The removal of 80% of filtered urine is processed in PCT.

The cytoplasm of the apical brush border cells is densely packed with mitochondria which gives them their acidophilic appearance. The mitochondria are present in large amounts in the basal region of the cells. The mitochondria are needed to provide energy for the active transport of ions. Sodium ions are transported out of the cells which creates an electrochemical gradient for more sodium ions to enter the cell from the luminal side followed by passive movement of water through tight junctions.

Cuboidal cells lining the proximal tubule interdigitate with one another along the lateral margins which makes it difficult to appreciate individual cells under the light microscope.

The proximal tubule is divided into two sections:

Morphologically the convoluted segments of the proximal tubule are confined only to the renal cortex and straight segments go to the outer medulla. 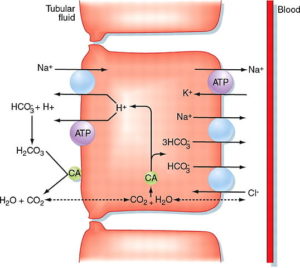 The main function of the proximal convoluted tubule is absorption. It maintains and balances the pH by secreting hydrogen ions and absorbing bicarbonate ions. It secretes hydrogen ions with the help of pH Na- H antiporter in the luminal membrane.

Hydrogen ions which are secreted in combination with the bicarbonate ions to form carbonic acid. Na+ – K+ ATPase is present on the basolateral membrane of the epithelial cells which is responsible for transporting sodium from the luminal side into the blood. P-type ATPase is responsible for sodium reabsorption.

Fanconi syndrome is a rare disease of the proximal renal tubule in which the proximal renal tubular cells are unable to absorb glucose, amino acids, uric acid, phosphate, and bicarbonate. It can be acquired or can be congenital. There are different forms of Fanconi syndrome which affects various functions of the proximal convoluted tubule. Renal tubular acidosis type 2 results when the reabsorption of bicarbonate is defective. Rickets and osteomalacia results when phosphate is not being reabsorbed.

There are numerous mechanisms which postulate the defective functioning of the proximal tubules resulting in the loss of substances but the three main mechanisms are:

There are numerous transporters located in the membrane of the proximal tubules which transport different substances across the cell. The energy required for this mechanism to take place comes from the sodium-potassium ATPase located in the basolateral membrane.

Note: Any process which affects to decrease the level of ATP in the cell will impair the secondary active transport of substances like glucose, phosphate and amino acids. This hypothesis has been proved by many experimental studies.

Many substances reduce the amount of ATP leading to Fanconi syndrome. One of these substances is maleic acid. Rats and dogs who were injected with maleic acid had a decrease in a number of sodium-potassium ATPase and decreased ATP resulting in glycosuria, phosphaturia, proteinuria, and bicarbonaturia. Similar results were observed when animals were injected with metals such as mercury, lead, and cadmium.

The most common cause of Fanconi syndrome in children is cystinosis which is caused by the accumulation of cystine in renal tubular cells. The genetic cause was postulated by a study in which five generations black family with autosomal dominant Fanconi’s syndrome was studied. The study postulated that mistargeting the peroxisomal EHHADH disrupts mitochondrial metabolism which leads to Fanconi syndrome. Abnormal accumulation of cysteine can induce an enlarged liver, eye disorders, and hypothyroidism.

Cystinosis only occurs in whites. The disease equally affects males and females.

Urine analysis can be done which documents the loss of substances like amino acids, glucose, phosphate, and bicarbonate. Increased urinary lactate to creatinine ratio has recently been introducing which is a sensitive marker for the disordered proximal tubular function. Elevated levels of urinary retinol-binding protein 4 is a helpful biomarker helping in the diagnosis of Fanconi syndrome.

Treatment of patients with Fanconi syndrome mainly consists of replacing substances like fluid and bicarbonate which are being lost in the urine. Kidney transplantation can be considered in the cases of patients with renal failure caused due to cystinosis.

Hartnup disease, also known as pellagra like dermatosis is an autosomal recessive disorder caused by defective absorption of non-polar amino acids particularly tryptophan which is further converted into melatonin, serotonin, and niacin. This disorder is characterized by defective transportation of neutral amino acids in both apical brush border of the small intestine and proximal tubule. Nicotinamide is formed by niacin which and nicotinamide is a component of NAD+ which is required for many metabolic functions.

Nicotinamide is required for neutral amino acid transporter production in proximal renal tubule in the kidney and in the intestinal mucosal cells in the small intestine. The defective gene is SLC6A19 which is located on chromosome 5. The patient represents a distinctive skin rash and followed by uncoordinated voluntary movements, vision ailments, and cognitive delays.

Overall 1 case in 30,000 live births has been found in screening programs done in Australia and North America. Overall prevalence has been reported as 1 case per 23000 live births which makes it the most common amino acid disorder in humans. Its manifestations start in childhood.

Signs and symptoms of the hartnup disease usually become evident during infancy but sometimes begin as late as early adulthood. Symptoms can be triggered by fever, sunlight or emotional distress and can be summarized as the following:

Hartnup disease is an autosomal recessive disease and does not occur in heterozygotes. The disease results from cousin marriages or marriages within the same families for generations. The disease was reported in 1960 from the presence of indoles and tryptophan in the urine of the affected individuals. Pellagra-like symptoms were caused by excessive loss of tryptophan due to malabsorption. In 2004 the causative gene was identified which was SLC6A19 which was located on chromosome number 5.

It is a sodium-dependent and chloride independent transporter which transports neutral amino acids like tryptophan and is expressed in large amounts on the kidneys and intestine.

Patients with the hartnup disease are unable to absorb tryptophan which is required for many metabolic functions. Thus, in times of stress or need, their body is unable to make an adequate amount of B-complex vitamin niacinamide.

For the diagnosis of hartnup disease, urine chromatography is done which shows increased urinary excretion of the following neutral amino acids:

Skin biopsy and Jejunal biopsy is done in selected patients. Skin changes are similar to the skin changes in pellagra.

Molecular genetic testing provides the confirmation of the Hartnup disease by detecting variations in  SLC19A6 gene.

Treatment aims at avoiding exposure to the things which exaggerate or trigger an attack and aiming at replenishing the deficient amino acids.

Following are the treatment modalities used:

Most of the patients affected remain asymptomatic but in some patients, skin manifestations and neurologic involvement really impair quality of life. Attacks become less frequent with age. Mental retardation and short stature are seen in some of the patients. Pregnancy is not influenced by hartnup disease as the placental transport of free amino acids is not being affected.

There are many causes of proximal renal tubular acidosis but one of the major known causes is Fanconi syndrome. Due to secondary hyperaldosteronism, the patients are also typically hypokalemic and there is urinary potassium loss as well.

There are acquired and familial causes leading to proximal renal tubular acidosis which are listed below.