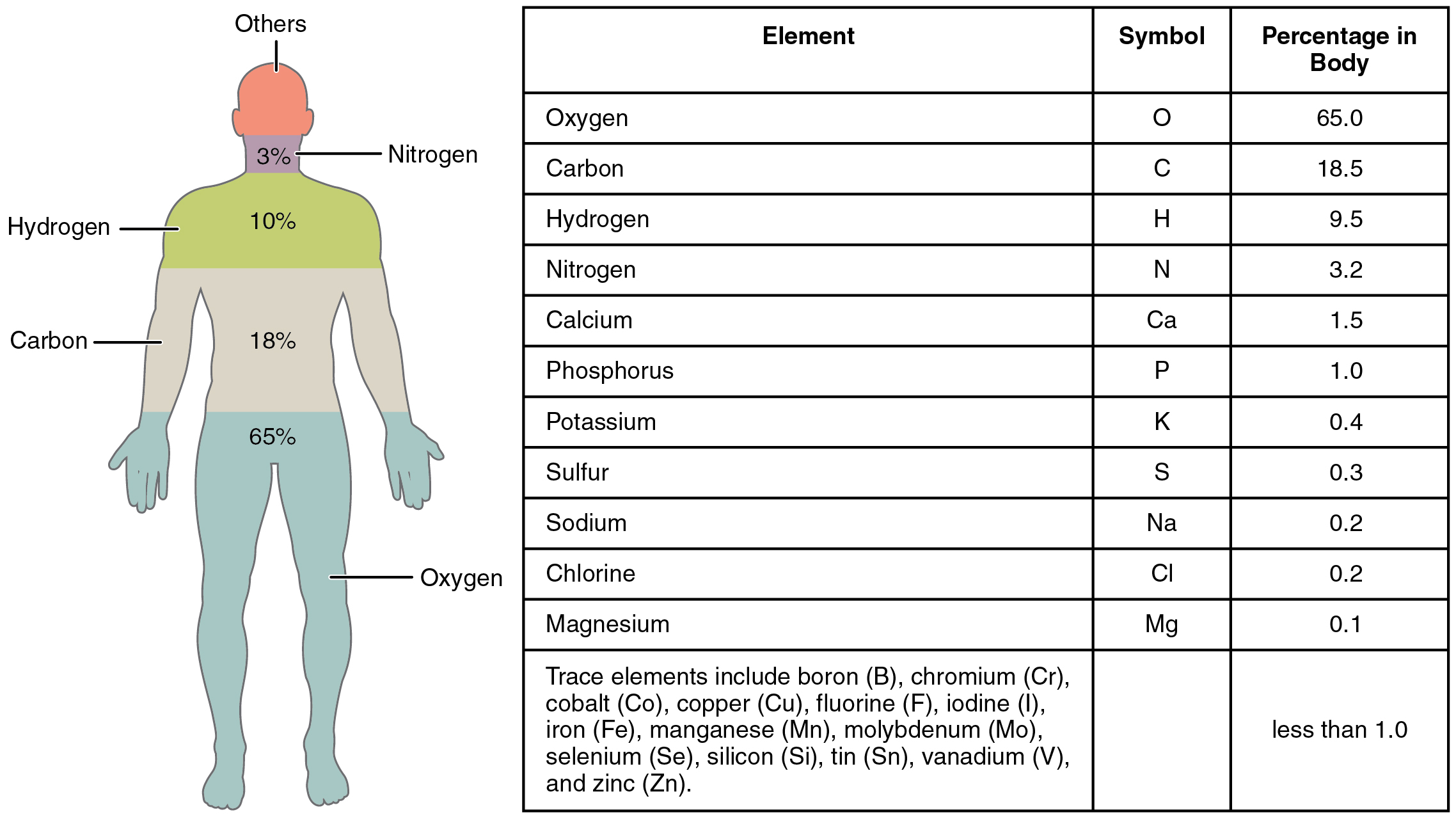 Picture: “Elements of the Human Body” by philschatz. License: CC BY 4.0

Carbon (symbol C) is a tetragen; this means that it is in the 4th group of the periodic system of elements. Within this group, it is the 1st element and, thus, is in the 2nd period. It has the atomic number 6 and is a non-metal. It has a melting point of 3550°C and a boiling point of 4827°C. Chemically pure carbon may be prepared in the laboratory through the thermal decomposition of sucrose in the absence of oxygen. The physical and chemical properties of carbon are also dependent on the crystalline structure of the element.

Carbon has a relative atomic mass of 12 grams per mol. However, there are 2 additional isotopes of carbon: C13 and C14. C13 is the more frequent isotope and is considered stable. C14, on the other hand, is very rare and unstable. Its half-life is 5730 years and it is used for the radiometric dating of organic substances. Additionally, the density for graphite is estimated to be 2.25 g/cm³ and that for diamond is approximately 3.51 g/cm³.

Pure carbon mostly exists in crystalline form and forms either graphite or diamonds as a modification. Diamond is the hardest natural substance and is also used as a cutting material besides its use as a gem. Under normal pressure and temperature conditions, graphite is the thermodynamically stable form of pure carbon. Because of its electronic conductivity, it is used as an electrode in the industry. Equally important is the fact that carbon as a free element has numerous uses such as its application as a black fume pigment in inks for printers and rims for motor vehicles. Graphite, an allotrope of carbon, is used as a lubricant, for pencil tips, as an electrode in dry cells, and as a component for high-temperature crucibles. An amorphous form of carbon referred to as vegetal carbon is utilized predominantly for industrial purposes for the manufacture of bleaching agents and as a gas absorbent.

In its less crystalline form, carbon is also known as soot. Mostly, soot forms as a byproduct of combustive processes. The regular inhalation of soot can lead to pneumoconiosis and cardiac damages. Moreover, evidence-based studies on workers who come into direct physical contact with carbon particles have shown that they may experience inflammation on the hair follicles and oral mucosal lesions.

Often, carbon is encountered as a compound with oxygen. Under high temperatures, these 2 elements form carbon monoxide (CO) or carbon dioxide (CO2). The latter is primarily important in the context of respiration and blood circulation. 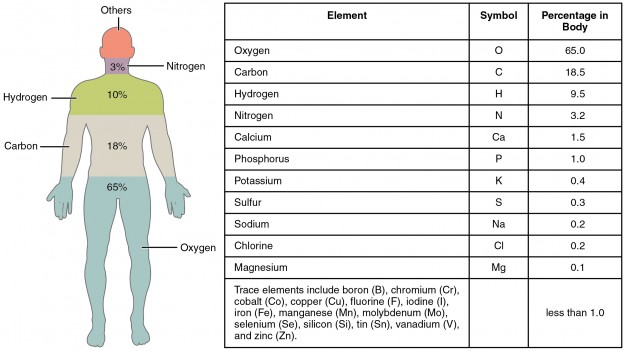 Picture: ‘Elements of the Human Body’  by philschatz. License: CC BY 4.0

In nature, carbon is scarcely found in its pure form, but rather as a compound in combination with other elements. In this sense, carbon can form a larger number of different compounds than all other elements combined. Most frequently, carbon binds with hydrogen. Together with oxygen, nitrogen, and sulfur, these 2 elements form the basis of organic chemistry.

Electron Configuration and Hybridization of Carbon

Carbon is in the 2nd period of the 4th main group of the periodic system of elements. This means that carbon has 2 electron shells around its core of 6 protons and neutrons each. This means that it has 4 valence electrons, which can form bonds.

Overall, carbon consists of a core with 6 protons, 6 neutrons, and a 2-layered electron shell with 6 electrons in total.

With the atom orbital model, the distribution of the electrons around the core can be described in more detail. The 1s level is completely filled with 2 electrons. The same situation is present in the 2s level. The2 remaining electrons of carbon are distributed in 2 of the 3 p-orbitals.

This way, the electron configuration for carbon is 1s2 2s2 2p2. The superscript number always states the number of electrons in the orbital. The s-orbitals are spherical, while the p-orbitals have a double droplet form with point symmetric arrangement. 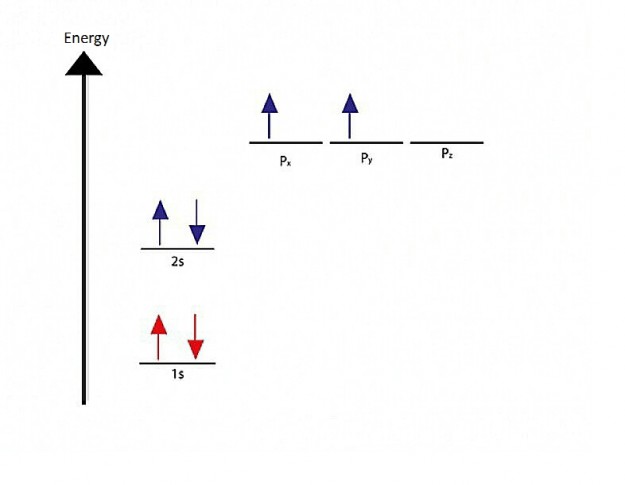 Image: ‘Electron configuration of the carbon atom in the ground state’ by Ichwarsnur. License: CC-BY-SA 4.0 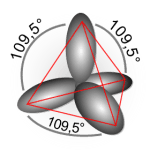 Picture: “Four sp3 orbitals are directed to the same tetrahedral angle to each other from.” by Sven. License: CC BY-SA 3.0

Hybridization means the fusion of 2-electron energy levels to a single joint level. In the case of carbon, the 2 energy levels of the 2nd shell can hybridize. This way, the 2s- and 2px-, y-, z-orbitals become energetically equal sp3-orbitals.

These 4 orbitals have an asymmetric dumbbell form and seem to be enlarged in a club-like shape to one side. The greater main orbitals arrange to have the greatest possible distance between each other due to electric repulsion. This results in a tetrahedral form with a typical distance angle of 109.5°.

These sp3-orbitals can overlap with the sp3-orbitals of another carbon atom and, thus, form a covalent bond. This bond is also referred to as sigma-bond. Analogous to this, a tetrahedral form results from the arrangement of the atoms. This is referred to as the diamond grid of carbon.

It is not necessary that all p-orbitals participate in hybridization. Moreover, only 2 of them can hybridize with the 2s-orbitals. They then form the 3 sp2-orbitals. They arrange in one plane and are thus 2-dimensional. The p-orbital, which does not participate in hybridization, is oriented rectangular to this plane and forms a droplet form both over and under the triangle formed by the sp2-orbitals. 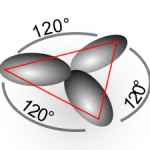 Picture: “Three sp2 orbitals are directed in a plane symmetry ( trigonal ) from each other.” by Sven. License: CC BY-SA 3.0

The sp2-orbitals of carbon can form covalent bonds with other sp2-hybridized carbon atoms. They then lie in one plane and have a triangular structure. One is the so-called plane of graphite.

The non-hybridized p-orbitals can interact with each other and form pi-bonds, which are less energetic compared to the sigma-bonds. Above and below the sigma bond, they form a kind of electron cloud. Because of this cloud, the rotatability of the molecule is lost.

However, the interactions of the pi-bonds are so weak that the graphite planes can be shifted against each other. This also is the reason why a pencil, which contains graphite, can be used for writing.

Thus, it is not surprising that there is also the possibility that only 1 of the three 2p-orbitals participates in hybridization. Together with the 2s-orbital, it then forms the so-called sp1-orbitals. They are arranged linearly, that is, in series. The 2 non-hybridized p-orbitals are located both orthogonally to each other and orthogonally to the sp1-orbitals.

The sp1-orbitals of carbon can form covalent bonds with other sp1-hybridized carbon atoms. They are then one-dimensionally arranged in a line. Together with the non-hybridized p-orbitals, a triple bond (C ≡ C) forms.

Note: The more substituents the carbenium ion has, the more stable it is. However, this rule does not apply to molecules stabilized by mesomerism (e.g.: benzyl).

Carbanion is the negatively charged carbon ion C–. Due to its lone electron pair, it is a nucleophilic particle. Carbanions mostly form via splitting off of an alpha-hydrogen proton, which is a proton that is bound to the C atom next to the functional group.

Radicals are particles with an unpaired electron. They are very unstable and can form additional radicals out of other components. This mostly leads to a chain reaction.

For example, radicals form under ultraviolet radiation. A homolytic split occurs, and the 2 bonding electrons divide equally into the products so that each of them has 1 unpaired electron.

Electron effects influence the distribution of the charge of a molecule and, thus, have an effect on its reactivity.

Inductive effects or I-effects are based on sigma-bonds and only have an effect over short distances. To understand inductive effects, it is important to comprehend the electronegativity of the affected atoms.

Note: The further an element is in the upper-right corner of the periodic table, the greater is its electronegativity.

Mesomeric effects or M-effects are based on pi-bonds. Their influences affect the whole molecule. A substituent with a lone pair can act as a +M-substituent if the lone pair participates in the mesomerism of the molecule. This way, the electron density of the molecule’s core is increased. Thus, the pi-electrons are not firmly bound to a location but are de-locatable.

Vice versa, -M-substituents can decrease the electron density of a molecule if they pull the pi-electrons away from the molecule’s core.

The electromeric effect refers to the displacement of electrons from one atom to another following the advent of reagent attacks within the pi-bond. In the event that the attacking species is an electrophile, the pi-electrons are drawn towards a positively charged atom. This occurrence is referred to as the +E effect. Contrariwise, if the attacking component is a nucleophile, the electrons are delocalized away from the attacking reagent and into the pi-system. This phenomenon is referred to as the –E Effect. Nonetheless, the term “electrometric effect” has gradually become obsolete.