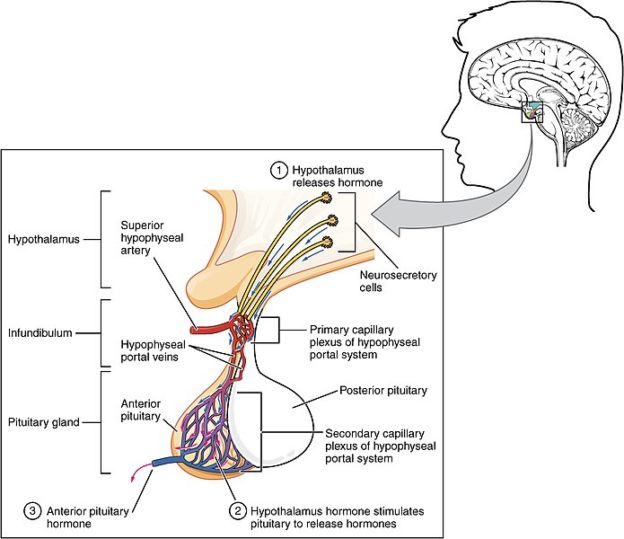 Prolactinomas are the most common hormone-secreting pituitary tumors that occur due to the neoplastic transformation of the anterior pituitary lactotrophs. They are benign, non-cancerous tumors and rarely become malignant.

Depending on their size, they are classified as follows:

Both men and women are equally affected. About 90% of women and 60% of men present with macroprolactinomas. This discrepancy is because symptoms, such as menstrual irregularities, are common in women; upon seeking medical consultation, the prolactinoma is diagnosed. On the other hand, fewer men tend to be diagnosed with macroprolactinomas as the symptoms of hypogonadism are non-specific initially, which delays this diagnosis.

Most men seek medical advice when they develop complications of space-occupying lesions. By then, the tumor has usually enlarged to form a macroprolactinoma. These tumors rarely occur in children.

The etiology of prolactinomas is obscure. Most prolactinomas occur sporadically; however, they may sometimes be caused due to a genetic condition. Prolactinomas can develop as an outcome of multiple endocrine neoplasia, type 1 (MEN 1) along with pancreatic islet cell tumors and parathyroid tumors. It is an autosomal-dominant genetic disorder. Familial isolated pituitary adenoma (FIPA) has an autosomal-dominant inheritance and accounts for 2–3% of pituitary tumors.

A mutation in the aryl hydrocarbon interaction protein gene has been identified in 25% of FIPA family members; these adenomas are predominantly prolactinomas and somatotropinomas.

Prolactin, a polypeptide hormone, is secreted by the lactotrophs of the anterior pituitary gland. Prolactinoma is an anterior pituitary lactotroph tumor that results in the increased synthesis and secretion of prolactin. This tumor is a true neoplasm that has monoclonal cell origin.

Prolactin acts on the mammary glands and facilitates mammogenesis (growth and development of the mammary gland), lactogenesis (secretion of milk), and galactopoiesis (maintenance of milk secretion). It participates in the synthesis of progesterone and in luteal cell hypertrophy during pregnancy and influences reproductive behavior. Prolactin plays an important role in homeostasis by regulating the immune system, maintaining osmotic balance, and facilitating angiogenesis.

It is hypothesized that dopamine may have a role in the pathogenesis of prolactinomas. Certain antipsychotic drugs deplete the dopamine stores in the brain or interfere with the effects of dopamine in the pituitary gland resulting in the secretion of prolactin.

Note: Dopamine inhibits the secretion of prolactin, which forms the basis of the treatment of prolactinomas.

Prolactinoma can cause symptoms either due to the effects of increased prolactin levels or due to complications arising from space-occupying lesions. Symptoms depend on the size of the prolactinoma as well as the age and gender of the patient.

Women of reproductive age commonly present with menstrual disturbances such as oligomenorrhea or amenorrhea. Infertility may result in the long run due to the suppression of gonadotropin-releasing hormone (GnRH) by prolactin.

Galactorrhea is seen in 30–80% of women. It can be spontaneous or expressive (observed only when the nipples are squeezed). This is due to the direct physiological effect of prolactin on breast epithelial cells.

Other symptoms in women are as follows:

The following symptoms are observed in men:

Symptoms caused due to space-occupying lesions

Symptoms mainly occur in individuals with macroprolactinoma. Symptoms and complications arising from space-occupying lesions of prolactinomas are similar to those observed in other brain tumors. Patients commonly present with headache and visual field defects. When the tumor compresses the optic chiasma, it results in bitemporal hemianopia, a common visual disturbance in individuals with prolactinomas.

Note: Blurred vision or complete blindness may occur if the prolactinoma grows inwards and compresses the optic nerve. Ophthalmoplegia occurs when the tumor compresses cranial nerves 3, 4, or 6.

Macroprolactinoma can also compress the surrounding normally functioning pituitary tissue, resulting in a deficiency of TSH, GH, or ACTH.

A biopsy of the lesion is indicated when there is diagnostic uncertainty.

Bromocriptine is a dopamine agonist that decreases the synthesis and secretion of prolactin. It reduces the rate of tumor cell division and also decreases cell growth. A twice-daily oral dose of 1.25 mg is recommended, which can be gradually increased over time. Doses > 7.5 mg are not needed except in the case of macroadenomas. Side effects include nausea, nasal stuffiness, depression, psychosis, and orthostatic hypotension.

After initiating treatment, prolactin levels return to normal within a few days to weeks in 80–90% of patients with microprolactinomas.

Bromocriptine treatment results in the shrinkage of tumors in about 80–85% of patients along with the recovery of gonadal functions. Contrary to the observation in patients with macroprolactinomas, prolactin levels do not return to normal in patients with microprolactinomas following bromocriptine treatment. Further, the shrinkage of the tumor does not correlate well with prolactin levels. As the tumor shrinks, pituitary function improves as evidenced by increased serum testosterone levels and sperm counts. The patient should be regularly monitored for clinical symptoms, prolactin levels, and radiological changes.

The adverse reactions of bromocriptine include dizziness, nausea, nasal congestion, and orthostatic hypotension.

Patients unresponsive or intolerant to bromocriptine may be prescribed cabergoline at a twice-weekly dose owing to its long half-life. It is more efficacious than bromocriptine in reducing prolactin levels and achieving tumor shrinkage. Cabergoline has fewer side effects compared to bromocriptine and includes nausea, headache, fatigue, and dizziness.

Note: Due to the above reasons, cabergoline is the first-line drug in the management of prolactinomas.

In women presenting with infertility secondary to a prolactinoma, gonadal functions recover and menstrual cycles resume within a few months as prolactin levels normalize. Sometimes, pregnancy may occur even before the appearance of the menstrual cycle; therefore patients should be advised to use barrier methods of contraception until the resumption of normal menstrual cycles. This helps assess the timing of conception and also helps the physician to withhold medical therapy upon conception.

Trans-sphenoidal pituitary adenomectomy is the surgical treatment of choice in patients with dopamine agonist treatment-resistant microprolactinomas (despite being treated with the maximum tolerated dose), macroprolactinoma, or large cystic or hemorrhagic tumors. Transcranial resection of a pituitary tumor is indicated only in patients with significant extrasellar extension.

Radiation is rarely used as a primary treatment to manage prolactinoma. It is only used when there is a rapid tumor regrowth despite medical and surgical intervention, or in the case of malignant prolactinomas. Complications include hypopituitarism (12–80% of cases), optic nerve damage, and neurologic dysfunction.

For patients with resistant prolactinomas and persistent hyperprolactinemia despite medical treatment, surgical debulking with or without radiation therapy and temozolomide (for malignant prolactinoma) are indicated. Temozolomide is a chemotherapeutic alkylating agent that has been shown to reduce prolactin levels and reduce tumor growth.

Even after regression of the tumor, periodic monitoring of prolactin levels is suggested to the patient to prevent tumor regrowth.

During pregnancy the pituitary gland doubles in size and prolactin levels increase 10-fold; hence, it is not advisable to check prolactin levels during this phase with the aim of treating prolactinomas.

Management of prolactinoma should commence prior to conception and the couple should be appropriately counseled. The anticipated risks are an enlargement of the prolactinoma and exposure of the fetus to dopamine agonists.

During pregnancy, women with prolactinomas should be followed-up every three months and specifically asked about headaches and vision disturbances. If an enlarged prolactinoma (macroprolactinoma) is revealed in an MRI and the patient’s vision is affected, they may be started on bromocriptine for the rest of the pregnancy.

If the adenoma does not respond to bromocriptine, cabergoline can be prescribed, since it is more efficacious and better tolerated than bromocriptine in the treatment of prolactinomas in pregnancy. If the patient is non-responsive to cabergoline and if the vision is severely compromised, then transsphenoidal surgery should be performed in the second trimester. If the patient is already in the third trimester, then surgery should be deferred until delivery.

Breastfeeding can be advised as there is no evidence that breastfeeding stimulates tumor growth. Dopamine agonists must be withheld in women who wish to breastfeed, as these drugs impair lactation.

Management of hyperprolactinemia via uptodate.com

Management of lactotroph adenoma (prolactinoma) during pregnancy via uptodate.com

Clinical manifestations and evaluation of hyperprolactinemia via uptodate.com