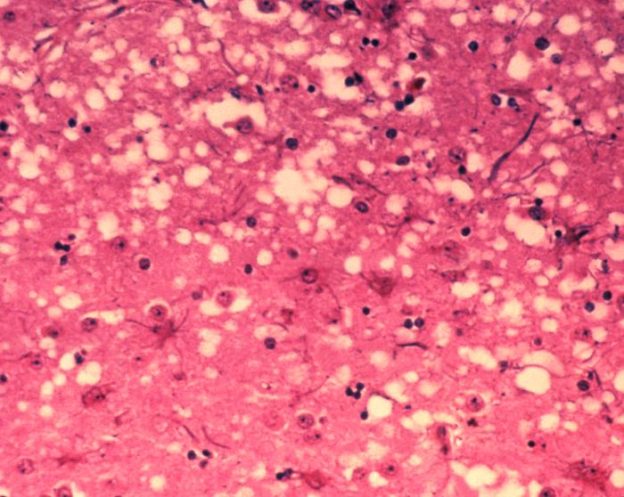 Image: This micrograph of brain tissue reveals the cytoarchitectural histopathologic changes found in bovine spongiform encephalopathy. The presence of vacuoles, i.e. microscopic ‘holes’ in the gray matter, gives the brain of BSE-affected cows a sponge-like appearance when tissue sections are examined in the lab. By Dr. Al Jenny. License: Public Domain

Prions cause bovine spongiform encephalopathy in cows, commonly referred to as mad cow disease, and scrapie in sheep. Prions are also suspected to cause chronic wasting disease in deer.

In humans, prions can cause Creutzfeldt-Jakob disease, fatal familial insomnia, kuru, and Gerstmann-Sträussler-Scheinker syndrome. Multiple system atrophy is caused by misfolded alpha-synuclein, which is also classified as a prion disease.

When prions affect a healthy individual, they cause properly folded proteins to convert into an amyloid form (aggregated beta-pleated sheets). When these sheets accumulate in abnormal quantities, they have the potential to damage the brain.

The structure of the prion protein is remarkably stable, and prions are resistant to denaturation. Thus, it is difficult to dispose of the infectious material.

Later in 1982, Stanley B. Prusiner and his team managed to isolate the protein after 2 years of research. They discovered that the infectious agent was purely a protein. They also stated that the prion protein could occur in both normal and infectious forms.

Prion proteins are present throughout the body in humans and animals. The prion protein found in infections has a different structure and is resistant to proteases. Entry to the brain occurs through infection, resulting in the progressive breakdown of neurons and causing prion disease. All prion proteins are not infectious. The following are the different forms of prion proteins:

This is a normal constituent of the cell membrane and has an alpha-helical structure. Normal prion proteins have important functions, which include cell-to-cell adhesion and communication in the brain. PrPc binds to copper ions with great affinity.

This is an isoform of PrPc that is resistant to proteinase K and is structurally misfolded. It may or may not be infectious.

This is a structurally altered form of the normal PrPc which is always infectious and causes disease. It is a component of the infectious prion particles. The exact structure of the protein is still unknown but it has beta-pleated sheets that form amyloid fibers, which eventually accumulate and form plaques.

The heterodimer model was the first to explain how prions replicate. This model stated that when a single molecule of PrPSc comes in contact with a molecule of PrPc, it catalyzes the conversion of the normal protein into the altered form, and this process continues until many defective protein molecules are formed.

Another model explains that PrPSc exists only in the fibril form and this fibril form binds to the normal PrPc causing its conversion into abnormal protein. 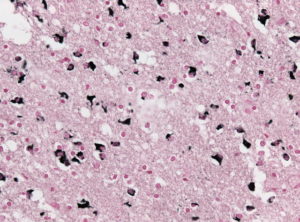 Generally, prions are resistant to heat, ionizing radiation, formaldehyde, and proteases. However, the aforementioned may reduce their infectivity. Decontamination relies on hydrolysis which destroys the protein structure. This can be done using sodium hydroxide, sodium hypochlorite, and acidic detergents like LpH. Autoclaving at 134°C for 18 minutes is considered effective.

The World Health Organization (WHO) has approved three ways to disinfect all heat-resistant instruments as follows:

There are no definitive means for diagnosing and treating prion disease but some methods are being used. These include: