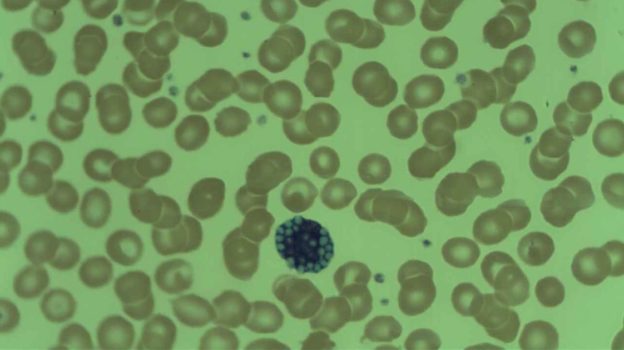 Image: “Mott cells are plasma cells that have spherical inclusions packed in their cytoplasm. It was first identified by F. W. Mott, who identified these cells in the brains of monkeys with trypanosomiasis. These inclusion are commonly seen in cases of reactive plasmacytosis, haematolymphoid malignancies (Burkitt’s lymphoma, Large B-cell lymphoma, lymphoplasmablastic lymphoma, multiple myeloma, Wiskott –Aldrich syndrome and von Recklinghausen’s neurofibromatosis).” by Osaretin – Own work. License: CC BY-SA 4.0

Primary immunodeficiencies are a group of disorders caused by defects in the immune system development and function.

Under normal human physiological conditions, inactive complement proteins circulate in the blood. When activated by a foreign body, such as a pathogen, the proteins become enzymatically active and trigger several molecules in a series of reactions, including:

Complement reactions occur in two distinct pathways: the classical and the alternative pathway.

Classical pathway: an immune complex binds to C1, which then cleaves proteins C2 and C4. This causes cleavage of C3 and then of C5,6,8, and 9. A membrane attack complex forms and cell lysis occurs.

In normal human physiology, this protein will inhibit C3 and C5 convertase, stopping membrane attack complex formation and the attack on human cells.

Red blood cells, in particular, are much more susceptible to lysis because of factor deficiency, leading to cell destruction. Patients present with paroxysmal nocturnal hemoglobinuria.

Angioedema is an autosomal dominant hereditary condition that occurs in 1 in 10,000 individuals. Individuals with C2 deficiency have an increased risk.

Symptoms include swelling, which may or may not be triggered by stress or trauma. The clinical features are:

Deficiencies in C2 and C4

Loss of the complement system by deficiencies in C2 and C4 results in a reduction or lack of immune activity. These conditions can present similarly to autoimmune disorders such as systemic lupus erythematosus. Some C2 deficiencies are associated with autoimmune diseases like lupus.

C3 deficiencies are associated with a number of conditions. Reduced levels of C3b increase the probability of developing infections with severe pyogenesis. This is caused by reduced opsonization. Individuals with C3 deficiencies are also more susceptible to type III hypersensitivity reactions (reduced clearance of antigen-antibody-C3b complexes from the circulation increases the risk of hypersensitivity reactions).

As noted above, C5-9 form the membrane attack complex that causes cell lysis. Without this, gram-negative bacteria are far more likely to cause a serious infection. Of note, patients with C5-8 deficiencies are particularly susceptible to Neisseria infections.

Phagocytic cell disorders interrupt the development or functioning of phagocytes. Under normal physiological conditions, phagocytes ingest and digest pathogens as part of a humoral immune response.

Polymorphisms in the gene that codes for NADPH oxidase can result in chronic granulomatous disease. In CGD, the oxidative burst does not occur, and phagocytes are unable to break down invading pathogens, increasing the patient’s susceptibility to bacterial and fungal infections. There are several types of CGD, and around 1 in 200,000 individuals are diagnosed with the disease.

This is a rare autosomal recessive disorder caused by defective neutrophil lysosome function. It is characterized by recurrent streptococcal and staphylococcal infections.

T-helper cells are unable to produce IFN-Ɣ, which reduces macrophage activation. The TH2 pathway is increased, releasing histamine. Increased histamine levels cause neutrophil chemotaxis, and the patient may suffer from a recurrent “cold.” The syndrome can also result in atopic dermatitis and staphylococcal abscesses.

This autosomal dominant condition causes irregular G-CSF production (which stimulates the granulocyte production). Usually, patients will have neutropenia (a defect in neutrophil migration) for three days during every 21-day cycle. During this period, they are susceptible to bacterial infections.

Polymorphisms in integrins on leukocytes cause improper neutrophil migration and recurrent infections. This syndrome can cause delayed umbilical cord separation.

This syndrome can clinically resemble cystic fibrosis. It is often characterized by pyogenic infections and exocrine pancreatic insufficiency.

This disease typically results in 1-3 day episodes of fever. Mutations on the gene encoding IL-1β cause the disease.

It presents in childhood. The condition occurs most frequently in individuals of Mediterranean, Middle Eastern, or North African descent.

This typically presents in adults with oral and genital ulcers. It is common in the Middle East and Asia. The disease causes inflammation of blood vessels. However, the genetic underpinnings of the disease are currently unknown.

This disorder often develops in the first few weeks of life and causes inflammation in multiple organ systems, including the nervous system, skin, etc. Newborns can develop fever and meningitis. Mutations in NLRP3 account for around 60% of patients with the disease. However, the underlying mechanism that causes inflammation is currently unknown.

Mutations affecting T-cell maturation can often lead to autoimmune conditions, whereby the immune system attacks self-antigens. Mutations can occur in a number of different areas, including the thymus, during T-cell selection, and in regulatory T-lymphocytes.

Mutations in the AIRE gene (this gene is involved in the expression of thymic self-antigens) can lead to autoimmune polyglandular syndrome – whereby patients develop a number of autoimmune diseases.

In some patients, mutations can occur in regulatory T-lymphocytes. For instance, mutations in the Foxp3 gene (a transcription factor for T-regulatory lymphocytes) can cause IPEX (Immune dysregulation, Polyendocrinopathy, Enteropathy, X linked syndrome). Patients develop a number of autoimmune conditions after birth, including type 1 diabetes.

This type of immunodeficiency characteristically presents in early adulthood with recurrent upper and lower respiratory tract infections. IgG levels are typically below 0.5 g/L. The disease is caused by a myriad of genetic mutations and typically affects 1 in 50,000 people.

This heritable disease is caused by a lack of B cells. B-cell development falters at the pre-B stage. An X-chromosome gene polymorphism for tyrosine kinase causes a loss of function mutation that inhibits B-cell maturation.

Treatment is usually given as IV immunoglobulins.

The prognosis is historically poor, but some patients survive into adulthood.

Chronic lung disease and lymphomas are complications that can cause mortality.

This is a relatively common primary immunodeficiency, occurring in 1 in 600 people in some parts of Europe. Recurrent infections typically cause presentation. There is no known pathogenesis.

X-linked mutation in the CD40 ligand gene causes abnormal signaling between B- and T-lymphocytes. Typically, CD40 is involved in the generation of B-lymphocytes with high-affinity immunoglobulin. It is also involved in T-cell maturation. The disease is mild and often only presents in later life. Opportunistic infections will occur.

This is an X-linked condition causing cytoskeletal functional deficits, eczema, and thrombocytopenia.

This deficiency is often referred to as bare lymphocyte syndrome. It is a rare immunodeficiency, accounting for about 5% of severe combined immunodeficiency cases. The syndrome causes a lack of HLA class II expression, which results in a lack of T-cell immune response. Patients are highly susceptible to infection.

SCID is an umbrella term to describe a number of disorders resulting in impaired B- and T-cell activity. This leads to recurrent infections.

The most common mutation is on the IL-2 receptor gene.

Typically, newborns will suffer intracellular pathogenic infections because humoral immunity comes from IgG and IgA in breast milk. Newborns suffer from opportunistic infections, and without treatment the disease is fatal.

SCID is a life-threatening syndrome. Patients present before three months of age with recurrent infections. Common features are:

Treatment is typically one of the following:

SCID is a highly fatal disease. Death results from repeated infections before the age of two years.