Are you more of a visual learner? Check out our online video lectures and start your preventive medicine course now for free! 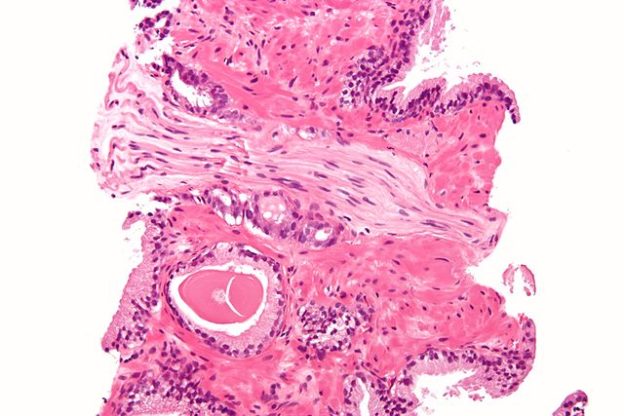 Prostate cancer at the early stages does not usually show symptoms, and therefore, most of the prostate cancers are first found during screening tests. At a later stage, symptoms include having difficulty in starting urination, urinating frequently, having a weak or an interrupted flow of urine, as well as having traces of blood in the urine and semen. Two types of tests are used for screening purposes: 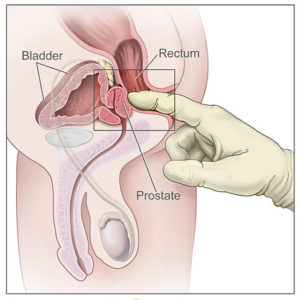 Image: “Digital rectal exam; drawing shows a side view of the male reproductive and urinary anatomy, including the prostate, rectum, and bladder; also shows a gloved and lubricated finger inserted into the rectum to feel the prostate.” This image was released by the National Cancer Institute, an agency part of the National Institutes of Health, with the ID 7136. License: Public Domain

While performing a DRE, a lubricated, gloved finger is inserted into the rectum to check for any hard areas or bumps. Prostate cancer usually begins to develop in the posterior part of the prostate, and as the rectum is just behind the prostate gland, the digital examination can prove to be a useful way of detecting prostate cancers at an early stage.

Findings that suggest malignancy on digital rectal examination include:

It is important to note that:

PSA is an antigen formed by the normal and cancerous cells of the prostate gland. Mostly found in semen, PSA is present only in small amounts in the blood; thus, its detection in the blood may indicate excessive production.

Interpretation of PSA levels in the blood:

Less than 4 ng/mL for men without prostate cancer.

PSA levels of more than 10 ng/mL increase the chances of having prostate cancer by more than 50%; thus, it is considered as an arbitrary cut-off point for aggressive workup and follow-up.

In the grey zone of 4-10ng/L, then do the following to help differentiate cases as high risk or low risk:

Obtained by dividing the Free PSA by the Total PSA. If it is >15%, then the likely diagnosis is BPE, while if the ratio is <15%, then prostatic cancer is more likely since the carcinoma has less free PSA than BPE; thus, less ratio as PSA is bound to alpha-1-chymotrypsin and alpha-2-macroglobulin.

Serial measurements are done to determine the rate at which the PSA level rises per year. A rise by 0.67 ng/L or greater per year indicates malignancy is likely.

This is obtained by dividing the PSA level by the volume of the prostate. Even with the availability of several options, problems still arise from false positivity and negativity as with any other screening tests.

Almost 15% of men with PSA levels lower than 4 ng/mL are still diagnosed with prostate cancer on biopsy (False negatives). 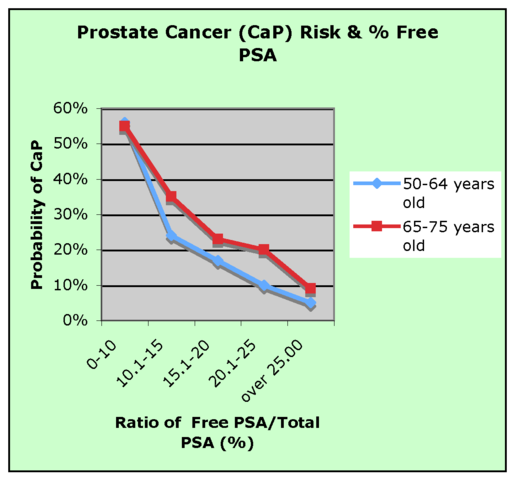 Image: “Risk of prostate cancer in two age groups based on Free PSA as % of Total PSA.” by Unknown.
License: CC BY-SA 3.0

It is important that gaps in knowledge of what could potentially lead to inappropriate PSA testing are sealed. There are more upcoming methods that can greatly improve PSA, but a lot needs to be done on them including magnetic resonance imaging and clinical decision rules. Currently, the risk: benefit ratio for PSA screening is worrying, especially given the categorization of ages to undertake it.

Prostate, Lung, Colorectal, and Ovarian (PLCO) Screening Trial results showed that 76,693 men between 65 – 74 years in the U.S had prostate cancer. No difference in prostate cancer mortality in the screening group and the control groups was found. More cancer cases were detected in the screening group. There was 52% contamination of the control group, with prostate-specific antigen testing.

It is important to note that despite these recommendations, patients will always have their preferences and values; thus, it is important that they have access to the right information to make informed decisions. The cost for these testing and screening will also play a role in the decision that a person arrives at

160,000 men between 55 and 69 years had prostate cancer. Statistically, a significant reduction in prostate cancer mortality with screening is possible.

Efficacy: 1.28 deaths reduced per 1000 men. 27 cancers would have to be treated to prevent another death.

It is either done by:

A radical prostatectomy is an effective treatment option, but it results in urinary incontinence in up to 12% of the cases and erectile dysfunction in about 50% of the cases. It raises chances of bleeding, injury to the rectum and formation of cysts 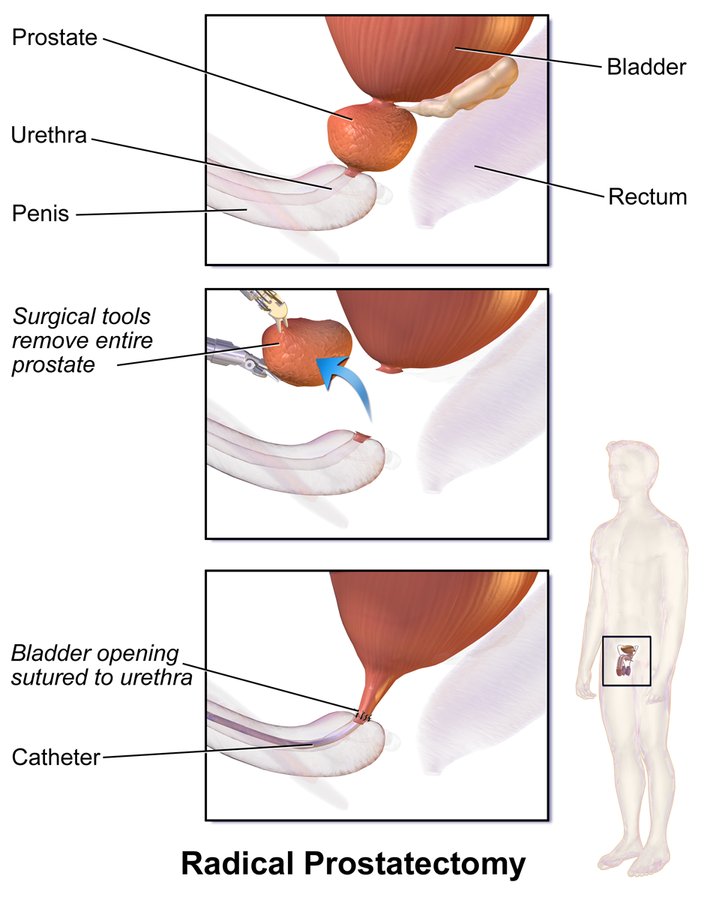 It is the application of high energy X-rays and other particles to kill cancerous cells.

Two types of radiation therapies are used for prostate cancer:

Radiation therapy results in erectile dysfunction in about 50% of the cases. There are also rare incidences of chronic loose stool and urethral strictures. It is also more expensive compared to prostatectomy and has more long-term side effects. 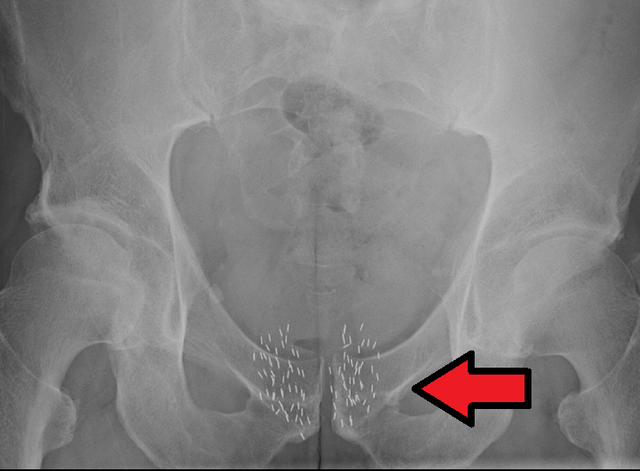 What Screening Tests Are There for Prostate Cancer? (2016, July 18). Retrieved April 02, 2017, from https://www.cdc.gov/cancer/prostate/basic_info/screening.htm