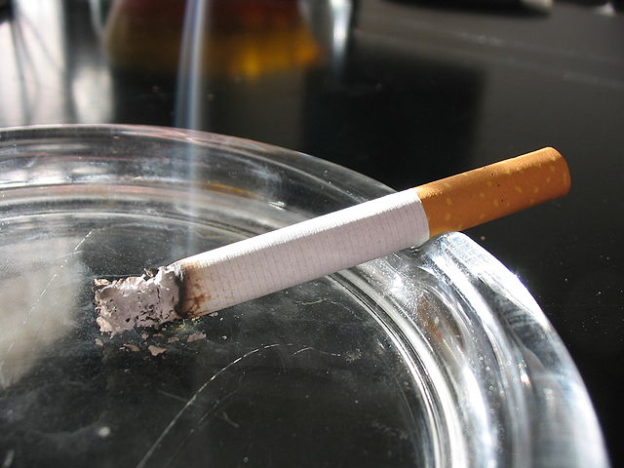 Image: A lit cigarette in an ashtray by Tomasz Sienicki. License: CC BY-SA 3.0

Lung cancer is considered the most common cancer in the world, and tobacco smoking is a recognized major modifiable risk factor leading to the disease. Cessation of tobacco smoking reduces the incidence and mortality by about 90%.

Considering gender-based statistics, breast cancer in women, and prostate cancer in men, are more common. Almost 14% of all the new cases are of lung cancer. In 2017, the American Cancer Society estimated lung cancer incidence in US populations. 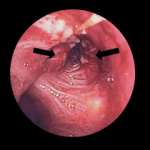 Image: “Lung cancer in the left bronchus, as seen with a bronchoscope” by JHeuser. License: CC BY 2.5

Lung cancer is the leading cause of death in America. More people die of lung cancer each year than of prostate, breast, and colon cancers combined. The individuals diagnosed with lung cancer are usually ≥ 65 years. Only about 2% of the diagnosed cases are in people younger than 45 years.

The chances of developing lung cancer for smokers and non-smokers during their lifetime are as follows:

Smokers, however, have a greater risk than non-smokers.

Lung cancers are usually at an advanced stage by the time they are diagnosed, so they are difficult to treat. However, screening tests have made it easier to diagnose cancer earlier in high-risk patients. Early diagnosis can improve the mortality rate.

A low-dose CT (LDCT) scan of the chest is used to screen for lung cancer. LDCT uses less radiation, and in contrast to standard CT scan, it does not require intravenous contrast dye.

Who Should Be Screened?

According to the U.S. Preventive Services Task Force recommendations, the following people should undergo yearly lung cancer screening with LDCT:

Pack years: Smoking one pack of cigarettes each day for one year is equal to 1 pack year.

When to stop screening

The U.S. Preventive Services Task Force recommends that the following groups of people should no longer receive yearly lung cancer screening with LDCT: