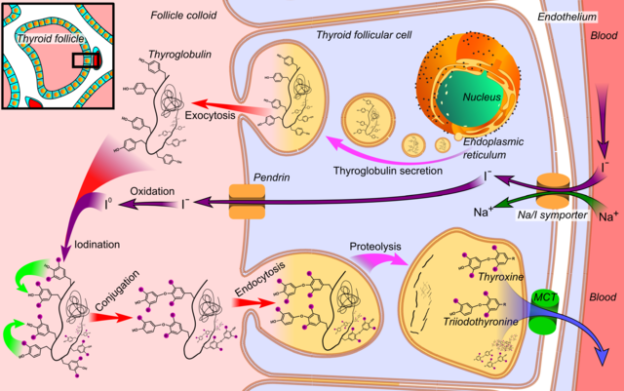 Tyrosine is one of the nonessential amino acids the body uses to synthesize polypeptides or proteins. It has a polar side group and is produced when the body processes the amino acid phenylalanine. Tyrosine is essential in the production of several neurotransmitters such as epinephrine, dopamine, and norepinephrine. It also helps in the production of melanin, which is the pigment present in the skin and hair. Tyrosine helps regulate several hormones in the thyroid and pituitary and adrenal glands.

Tyrosine is derived from casein, a protein found in milk or milk products. Together, tyrosine and phenylalanine form an amino acid pair. Phenylalanine cannot be synthesized by the body so it must be consumed in food. The World Health Organization has recommended daily intake of phenylalanine and tyrosine of 25 mg per kg of body weight.

The phenol group in the structure of tyrosine affects different functions. It can serve as a part of a cell’s signal transduction processes, and it also can function as a receiver of phosphate groups where the attachment is catalyzed by protein kinases. The activity of the target protein will be affected when the phenol group is phosphorylated.

In plants, tyrosine plays a major role in photosynthesis. It acts as an electron donor in the reduction of oxidized chlorophyll. During this process, the hydroxyl group of the side chain is lost. 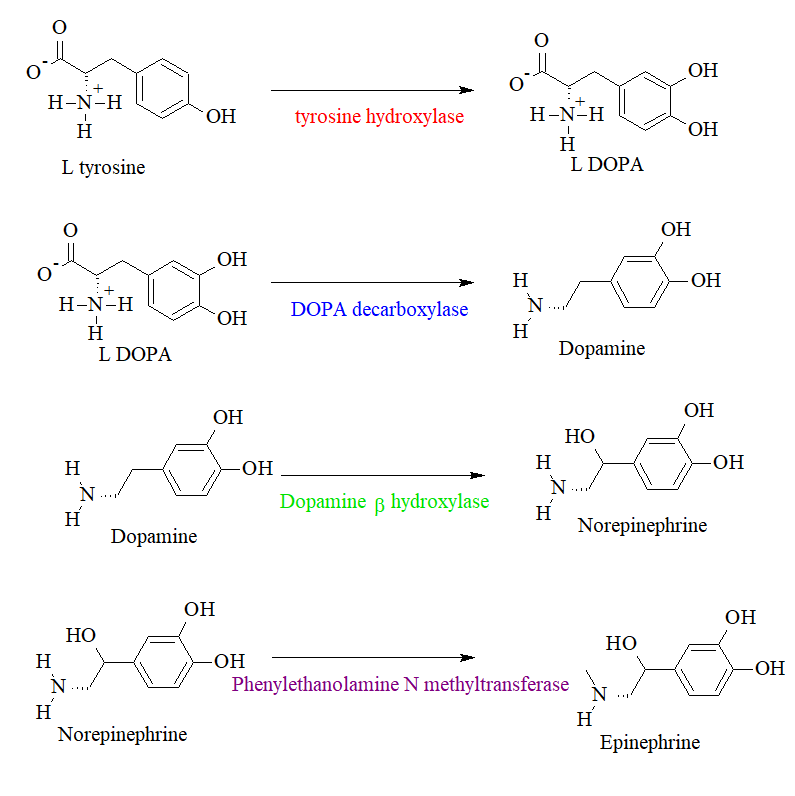 Tyrosine can be metabolized to produce different neurotransmitters. L-tyrosine is the isomer of tyrosine that naturally occurs. In the first steps of the metabolic process, L-tyrosine is converted to levodopa using the enzyme tyrosine hydroxylase and tetrahydropyridine as a cofactor. The levodopa is further decarboxylated to produce dopamine with the help of the enzyme DOPA decarboxylase.

Dopamine can be further oxidized using dopamine beta-hydroxylase (dopamine beta-monooxygenase). The end product of hydroxylation is noradrenaline. Noradrenaline is further methylated with phenylethanolamine N-methyltransferase. The end product of this step is adrenaline. Tyrosine has the potential to pass readily through the blood-brain barrier directly depend on the dietary intake as they get continuously metabolized to form dopamine and other neurotransmitters.

Levodopa or L-DOPA is the precursor of the neurotransmitter dopamine, norepinephrine, and epinephrine. It readily mediates neurotrophic factors released by the brain and the central nervous system and is sometimes produced as a psychoactive drug. It can cross the blood-brain barrier, which dopamine cannot do. L-DOPA is administered to patients with Parkinson disease and dopamine-responsive dystonia to increase the dopamine concentration in the patient.

Dopamine is a neurotransmitter that plays a big role in reward-motivated behavior. Most types of rewards cause an increase in the release of dopamine in the brain. Dopamine also functions as a local chemical messenger. It sometimes inhibits the release of noradrenaline and acts as a vasodilator.

Norepinephrine or noradrenaline is another neurotransmitter produced by the metabolism of tyrosine. It functions mainly to mobilize the brain and body for action. Its release is lowest during sleep and increases upon waking. Its release is related to the body’s fight-or-flight response. Norepinephrine is responsible for increasing arousal and alertness.

Adrenaline or epinephrine is a hormone or neurotransmitter produced by neurons in the adrenal gland. It plays a major role in the fight-or-flight response by increasing blood flow in the body. During this process, the body becomes more active, pupils dilate, and blood sugar increases.

Figure 2. Neurotransmitters produced in the metabolism of tyrosine. (Prepared by Mark Xavier Bailon)

Figure 2. Neurotransmitters produced in the metabolism of tyrosine.  (Prepared by Mark Xavier Bailon)

Thyroid hormones are tyrosine-based hormones produced by the thyroid gland. They function primarily for the regulation of metabolism. These hormones include triiodothyronine (T3) and thyroxine (T4).

These two hormones work to:

T4 and T3 are both produced by follicular cells of the thyroid gland. They are regulated by thyroid-stimulating hormone (TSH). T4 is produced by a series of steps in the follicular cells. The thyroid hormones are synthesized by oxidative coupling of iodinated tyrosine residuals by catabolism of thyreoperoxidase in thyreoglobulin. First, the Na+/I– symporter transports 2 sodium ions across the basement membrane of the cell. Along with the sodium ions, iodide ions are transported. An iodide ion (I–) is then moved across the apical membrane into the colloid of the follicle. The iodide ion is then oxidized by thyroperoxidase. Thyroglobulin’s tyrosyl residues are then iodinated by thyroperoxidase. The iodinated thyroglobulin binds to megalin for endocytosis.

TSH from the adenohypophysis (anterior pituitary) binds to the TSH receptor and stimulates endocytosis. The endocytosed vesicle then fuses with a lysosome of a follicular cell, which eventually cleaves T4 from the iodinated thyroglobulin. 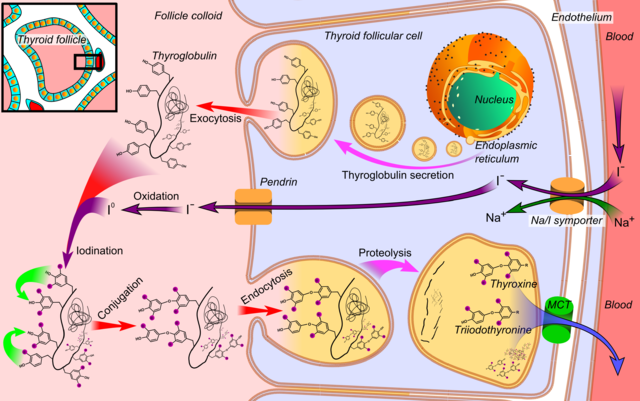 One of the most common disorders related to tyrosine is tyrosinemia. It is a genetic disorder characterized by disruptions in the different breakdown steps of tyrosine. When the disorder is left untreated, the tyrosine and the by-products of the entire process may build up in tissues and lead to serious health problems.

Type I tyrosinemia is the most severe. It is an autosomal recessive genetic disease caused by a lack of the enzyme fumarylacetoacetate hydroxylase, which is required for tyrosine metabolism. The signs and symptoms of this disorder present in the first few months of life. Infants with type I tyrosinemia fail to gain weight and grow. They experience poor food tolerance. Food rich in protein may cause diarrhea and vomiting. Infants also show yellowing of the skin and the white of the eyes. Type I tyrosinemia can lead to kidney and liver failure. Rickets or weakening of bones is also possible. The risk of liver cancer also increases.

The diagnosis of type I tyrosinemia is established by blood tests that depict elevations in plasma tyrosine levels. Confirmation of the disease is achieved by the presence of high levels of succinylacetone in plasma or urine. The disease is treated with nitisinone in a more effective manner when treated in acute episodes and slow disease progression. Low intake of phenylalanine and tyrosine is highly recommended to preserve the liver and kidney. Untreated children often do not survive past the age of 10 years.

Type II tyrosinemia is a less severe autosomal recessive disease caused by a deficiency of tyrosine transaminase. The disease affects the skin, eyes, and mental development. Signs and symptoms also present during the early years of life and include eye pain and redness, photophobia, and skin pain and discomfort on palms and soles of the feet. Approximately 50% of patients with this type of tyrosinemia have some degree of intellectual disability. The condition is diagnosed with blood and urine tests that show an elevation of plasma tyrosine and an absence of succinylacetone in plasma or urine. A liver biopsy will show decreased enzyme activity. Treatment includes a mild-to-moderate decrease in dietary intake of phenylalanine and tyrosine.

The rarest type of tyrosinemia is type III. It is caused by a deficiency of the enzyme 4-hydroxyphenylpyruvate dioxygenase, which is needed for the breakdown of tyrosine. Features of this disorder include intellectual disability, seizures, and intermittent ataxia.

Another type is transient tyrosinemia, which occurs in approximately 10% of newborns who exhibit temporarily elevated levels of plasma tyrosine. The cause of transient tyrosinemia is not genetic; it is due to a vitamin C deficiency or problems with liver enzymes due to premature birth. Transient tyrosinemia can be diagnosed by a blood test, urine test, and liver biopsy. The dietary restriction of phenylalanine and tyrosine is helpful in disease management.