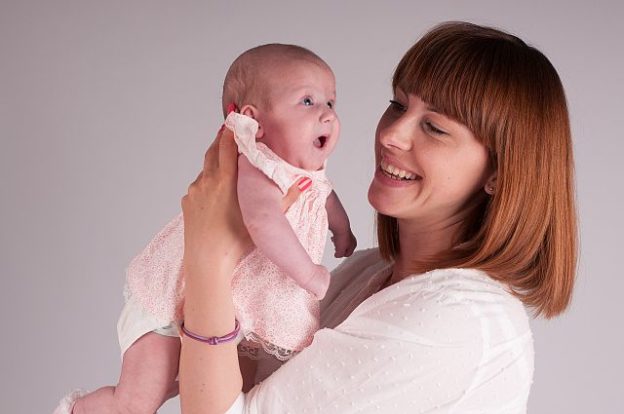 Image: A mother and her newborn. By: tabakpolska. License: CC BY-SA 4.0

Resumption of ovulation is unpredictable and can occur even before the onset of menstrual cycles in breastfeeding women; therefore, a return of the menstrual cycle is not a good indicator of the optimal time to begin using contraception. Typically, ovulation can occur between 25 and 40 days postpartum in non-lactating women, and 60% of these women are fertile.

Ovulation in women who are lactating or breastfeeding depends on the frequency and duration of breastfeeding, maternal nutritional status, and body mass index. Ovulation in breastfeeding women is typically delayed due to the inhibition of hypothalamic gonadotropin-releasing hormone by prolactin. Both puerperium and lactation bring about hormonal changes in the body that necessitate the need for effective contraception.

LARCs include the following:

Non-reversible contraceptives include the following:

The lactational amenorrhea method is an economical and temporary form of contraception in women with amenorrhea and who are breastfeeding at frequent, regular intervals; that is, they are feeding on demand and not expressing milk or bottle feeding. However, if a woman misses feedings, she is at risk of conceiving. As well, this method can be only practiced up to 6 months after a child’s birth or until the next menstrual flow begins.

As noted, hormonal contraceptives can only be used if there are no risk factors for VTE. They should ideally be started safely after 42 weeks postpartum. As well, estrogen can reduce the quality and amount of breast milk. Non-lactating women can be offered hormonal contraception with estrogen 4 weeks postpartum while breastfeeding women can be offered a progesterone-only pill, medroxyprogesterone depot injection (depot medroxyprogesterone acetate [DPMA], Depo-Provera), or levonorgestrel intrauterine system device. These methods do not interfere with sexual activity and may reduce menstrual bleeding.

DMPA is not recommended for long-term use (more than 2 years) in older women unless no other contraceptive alternatives are acceptable, as it is associated with a higher incidence of a decrease in bone density. It is also not recommended in women who have breast cancer or a history of breast cancer.

Barrier devices such as diaphragms and cervical caps should ideally be fitted 6 weeks postpartum as pregnancy and delivery tend to alter the cervical and vaginal size and tone as the uterus and cervix return back to their normal size after delivery. Condoms and spermicides, on the other hand, can be used in the immediate postpartum period. The use of contraceptive sponges should be postponed until at least 42 days postpartum to avoid toxic shock syndrome.

Both breastfeeding and non-lactating women can be offered intrauterine devices such as the Copper T or intrauterine systems such as the levonorgestrel-releasing intrauterine system. The Copper T is an ideal long-term contraceptive option and can be kept in situ for up to 10 years. If inserted in the immediate postpartum period, it is likely to be extruded and should ideally be inserted 30–42 days postpartum when the uterus has involuted completely. Three types of levonorgestrel systems are currently available. Each of these is effective for different durations ranging from 3–5 years.

Tubal sterilization is an effective and permanent contraceptive solution for women who have completed their childbearing. It should be offered with caution to women in unstable relationships, young women, or those who may want to have children later. This surgical procedure should ideally be performed in the immediate postpartum period as it is associated with lower failure rates compared with being performed later. If it is performed later, the procedure can be done either laparoscopically or transcervically.

A transcervical sterilization method (e.g., Essure) is another recommended method of postpartum sterilization. Scar tissue is formed in the fallopian tubes by micro-inserts through the uterus, resulting in permanent closing of the fallopian tubes over 3–6 months. As the tubes can take 3–6 months to close completely after the procedure, the patient should use another form of contraception during that. Confirmation of successful occlusion of the tubes requires a hysterosalpingogram.

Postpartum care: What to expect after a vaginal delivery  via mayoclinic.org