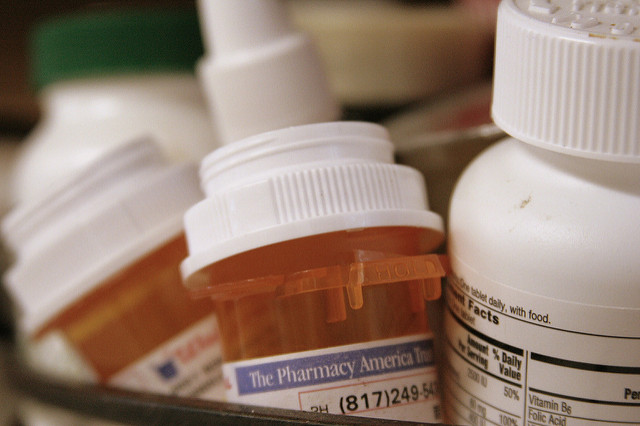 According to the National Health and Nutrition Examination Survey, approximately 65 million Americans are afflicted with hypertension. This number is broken down into varying percentages across different races living in the United States. Being an age-related disorder, there is an increased likelihood of people belonging to the older age group to develop hypertension. Moreover, complications related to this disorder, such as cerebrovascular accidents, heart failure, and end-stage renal disease is also on the rise.

The development of hypertension among people at risk can be attributed to a lot of factors, which could either be classified as modifiable or non-modifiable. Non-modifiable factors include genetics, age, and sex.

Genetics: There have been numerous studies suggesting that hypertensive persons could actually hand down a heritable gene putting their children and grandchildren at risk for developing hypertension.

Age: The natural decrease in the elasticity of blood vessels and responsiveness to blood pressure regulation by the body also decreases as people age, explaining why people tend to have higher baseline blood pressures when they reach old age.

Sex: It is also said to be slightly more prevalent among males, compared to females, which could be somehow attributed to the cardiovascular hormonal protection that women get before menopause.

Modifiable factors play a major role in the development of hypertension as well. Sedentary lifestyle, poor eating habits and use of vices such as tobacco smoking and excessive alcohol consumption have been implicated in most, if not all cases, of preventable cases of hypertension.

Conditions that manifest with hypertension 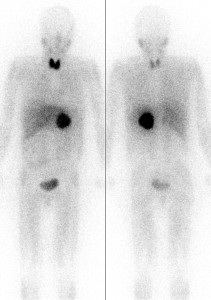 Image: “Body Szintigrafie 24 hours after intravenous administration of 123Iod-MIBG. Physiological occupancy of the thyroid, liver and bladder. Pathological accumulation in a tumor of the left adrenal glands (pheochromocytoma)” by Drahreg01. License: CC BY-SA 3.0

Hypertension may also be a result of an underlying pathophysiologic process going on in the body. An example of which is pheochromocytoma, a condition in which tumors are present in the adrenal medulla. Since this part of the adrenal glands is responsible in the production of adrenergic receptor stimulating hormones called catecholamines, alterations in the structure and function of this could result to changes in the peripheral resistance to blood flow and increase in the pumping activity of the heart, eventually leading to an increase in arteriolar pressure.

Another example of hypertension causing disorder is hyperthyroidism. In this condition, the body is generally in a constantly elevated metabolic state, making the heart and vascular smooth muscles more active. In both these cases, it is important to treat the underlying cause in order to successfully maintain blood pressure levels. These are only among the many conditions that could manifest with elevated blood pressure.

Diagnosis and Classification of Hypertension

The diagnosis of hypertension is made once a person’s blood pressure goes beyond the normal limits in two separate readings. Many institutions and organizations have tried to set criteria in order to standardize the diagnosis and treatment of hypertension. The most popular among these is the one set by the Joint National Committee on Prevention, Detection, Evaluation and Treatment of High Blood Pressure. Their 8th report (JNC 8) is the one being used to guide the approach to hypertension across America and in other countries. The committee has categorized hypertension into different classifications:

The treatment of hypertension has evolved a lot in the past years. With all the researchers being done and published, many treatment modalities have been proven to be either a hit or miss. This is particularly evident in the development of drugs used to manage blood pressure. Although many have made its way to the pharmaceutical market, a certain number remained effective only in theory and were eventually pulled out in the list of popular antihypertensive medications.

Anatomy and Biochemistry of the Adrenergic Impulse Transmission

Hypertension is generally brought about by the combination of the rise in the blood flow resistance in the vasculature, a rise in the blood volume and an increase in the cardiac output. The autonomic system, particularly the adrenergic division, is known to play a part in these instances, making them a good target for pharmacologic treatment development.

Anatomy of the Sympathetic Nervous System 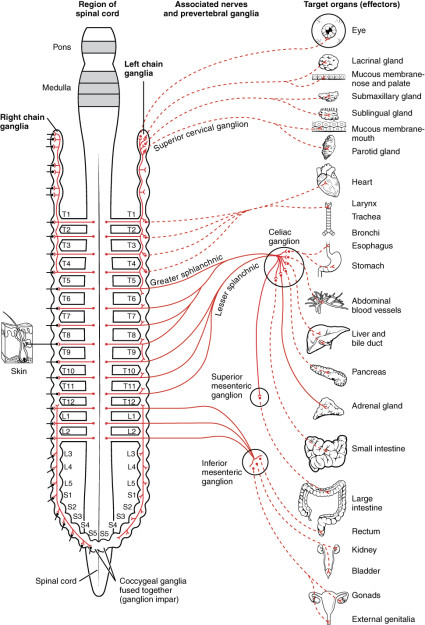 The sympathetic nervous system (SNS) is a particular division of the autonomic nervous system which autonomously regulates many homeostatic mechanisms in a human being. Otherwise known as the thoracolumbar division, the SNS comes from nuclei in the brain stem or spinal cord that branch out to become efferent nerve fibers.

Unlike the usual synaptic clefts such as that between 2 neurons and between neurons and muscles, sympathetic clefts are wider and neurotransmitters are released from swellings along the postganglionic neurons instead of terminal boutons. Given these characteristics, autonomic impulses give out effects that are slower in onset. Transmissions from a single sympathetic neuron also activate or inhibit many effector cells at once. 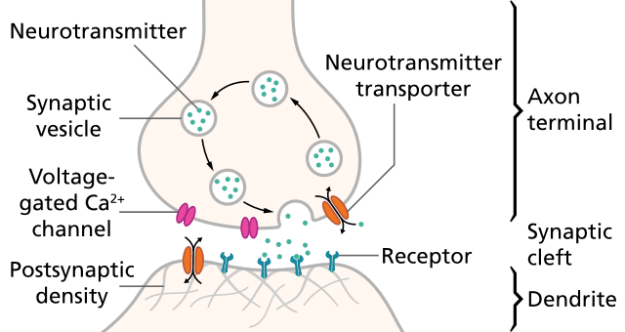 Another key component that separates the SNS from the parasympathetic nervous system is the type of chemical transmitter involved in their function. For the SNS, the major neurotransmitter is norepinephrine, otherwise called noradrenaline. As mentioned, this chemical is released from the varicosities found in the postganglionic nerve cell, although some are also produced in the adrenal medulla together with epinephrine. However, other neurotransmitters are also produced in some sympathetic nerve fibers; examples of which are dopamine and acetylcholine.

The neurotransmitters have features that make them a good focal point for pharmacologic research. Drugs that aim to address hypertension could manipulate these chemicals’ synthesis, storage, release, termination, and receptor effects.

Nerve cells in the SNS synthesize norepinephrine using tyrosine as the precursor. This amino acid is sent to the terminal portion of the neuron and is then converted to norepinephrine by a series of reactions. Different sympathetic neurons vary in which part of the reaction series they stop, explaining why other SNS neurons produce norepinephrine conversion metabolites such as epinephrine and dopamine.

Once the catecholamines are produced, they have stored in membrane-bound vesicles, ready for release during nerve cell depolarization. Storage is facilitated by antiporters found in the walls of the vesicles. These are specifically called vesicular monoamine transporter, or VMAT.

In order for the SNS to function normally, the released neurotransmitters have to be conserved by way of reuptake. This is made possible with the help of norepinephrine transporters or NETs. These shuttles release norepinephrine from the synaptic cleft back into the cytoplasm of the neuron. Without these reuptake mechanisms, there would be flooding of neurotransmitter activity in the synaptic cleft, resulting in a heightened adrenergic response. 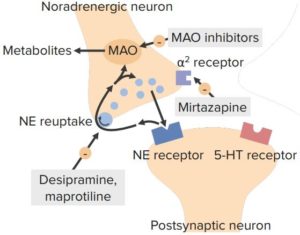 Although not mainly in use as anti-hypertensive medications, postganglionic sympathetic nerve terminal blockers and monoamine oxidase inhibitors are, in theory, able to manipulate some of the features of neurotransmitters involved in adrenergic signal transmission. 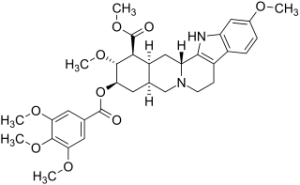 This drug is extracted from the roots of Rauwolfia serpentine. It was once popular as an antihypertensive medication, but with its many side effects and with the advent of newer medications, it is only used rarely.

It works by manipulating the uptake of synthesized catecholamines by storage vesicles in the nerve terminals. It blocks VMAT thereby keeping norepinephrine in the cytoplasm. This also works for other SNS fibers that synthesize dopamine and serotonin. This, in effect, decreases the amounts of catecholamines in the peripheries and an overall decrease in the cardiac output and vascular tone.

However, due to its ability to cross the blood-brain barrier and interfere with the amine stores in the brain, it comes with several adverse effects. Examples of which are:

Guanethidine is a popular outpatient drug for severe hypertension. However, because of its sympathoplegic effects such as postural hypotension, diarrhea and ejaculatory problems for men, it is not the first choice drug for the long-term management of hypertension.

The onset of action is delayed but effects tend to last beyond their half-life. Drugs that interfere with NETs and the reuptake of norepinephrine keep guanethidine and guanadrel inefficient. Examples of which are:

Monoamine oxidase inhibitors or MAOIs are more popularly used as antidepressants. They have been one of the earliest drugs used in modern therapy for depression and anxiety. Hypotension is actually a side effect of MAOIs and was the reason why they were used as antihypertensive agents back in the days. The exact mechanism for this is poorly understood. However, it has been theorized that the production of octopamine may play a part.

The inhibition of catecholamine degradation could result in an elevation of the total monoamine production. Although there is a rise in the number of monoamine substances in the synaptic clefts, those which do not have any vasopressor effects may dominate. This happens when there is interference in the way tyrosine is converted into a catecholamine. In the presence of MAOIs, there is an alteration in the hydroxylation of tyrosine, resulting to the production and storage of octopamine. This end-product has no pressor effects and may eventually replace norepinephrine in storage vesicles.

MAOIs previously used as antihypertensive agents include mirtazapine, desipramine, and maprotiline. These drugs are notorious for causing a hypertensive crisis when taken with tyramine-containing food such as cheeses, wines, soy products, and other fermented food items. Some of the side effects of MAOIs include:

James PA et al. 2014 evidence-evidenced based guideline for the management of high blood pressure in adults: Report from the Panel members Appointed to the Eighth Joint National Committee (JNC 8). JAMA 2014;311:507.