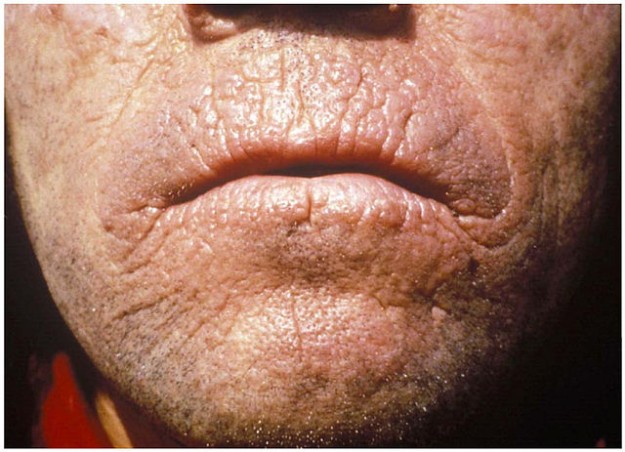 Porphyria is a condition characterized by a defective heme synthesis pathway due to enzyme defects, resulting in a clinical syndrome involving the skin, nervous system, and liver at individual levels or cumulatively. Heme production is considered to be a multilevel process controlled by various enzymes.

The heme is a porphyrin-containing compound that is synthesized in the human body in eight steps. In two-organ systems of the human body, heme synthesis occurs independently. In the following section, it is described as occurring as heme pools: 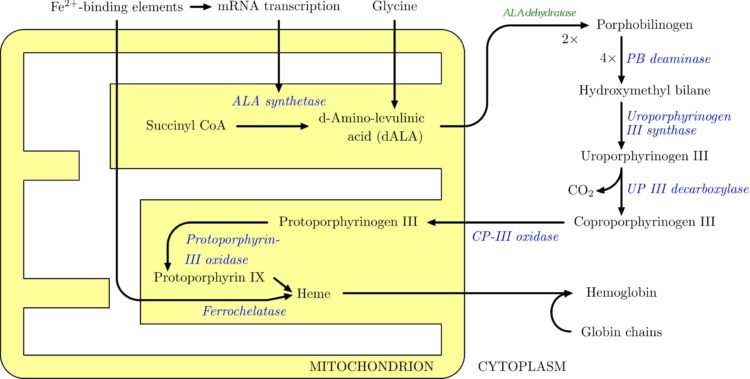 All porphyrias have a similar pathogenesis, in that an enzyme of the biosynthesis of the heme is impaired in its activity by a genetic defect. This impairment results in an accumulation of the substrate of the affected enzyme. These intermediates can cause various kinds of organ damage and symptoms when concentrations are increased. In addition, there is increased excretion through the urine and stool. The allocation of the affected enzyme and type of porphyria following the steps of the heme synthesis are listed here:

Clinical classification of porphyrias depends upon the pattern of involvement of the organ. 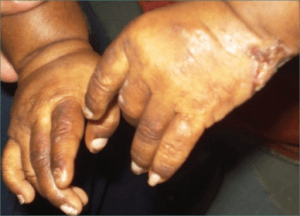 Image: Photograph showing the presence of lesions and scars on both hands of a patient with congenital porphyria. License: CC BY 2.0.

Note: Variegate porphyria is an acute, autosomal dominant, inherited form of porphyria and occurs with a significantly higher prevalence in the White population of South Africa. It is therefore also called South African genetic porphyria.

Clinical manifestations vary according to the level of metabolism affected. If enzyme defects are at the initial stage of metabolism, then the neurologic region is mainly affected. If defects occur at the final stages, then cutaneous involvement is present.

Some common signs and symptoms of porphyria are as follows:

Etiology and pathogenesis of PCT

The most common porphyria is porphyria cutanea tarda with an incidence of about 15 per 100,000 people. PCT is based on a decrease in the activity of uroporphyrinogen decarboxylase (URO-D). In this case, it is a chronic, hepatic porphyria. This progressive form can occur either as autosomal dominant hereditary or acquired; the peak incidence occurs after 40 years of age. The acquired form results from a deficiency of the enzyme caused by liver damage. The transition of a latent PCT inherited from chromosome 1, in the manifest form, can be triggered by alcohol abuse, estrogens, or infection, and often occurs with hepatitis C.

Note: With 70% of all cases, alcohol is the most common cause of a manifest porphyria cutanea tarda.

The most noticeable symptom of PCT is photodermatoses. The skin is extremely light sensitive and responds to exposure with blistering and delayed healing. Scarring often occurs on the face and on the back of the hands of patients who have PCT. Similarly, patients show increased hair growth (hypertrichosis) and hyperpigmentation. The skin manifestation of PCT can be presumed without a prophylaxis disfiguring extent. 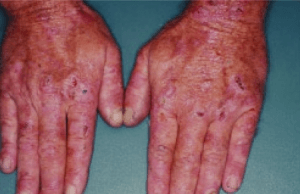 Image: Erosions, crust, and blisters are evident on the hands of this patient with PCT. License: CC BY 2.5.

In addition, the porphyrin deposits cause progressive liver damage with pathologically elevated liver function values up to the sonographically detectable nodules. A characteristic symptom is dark-colored urine due to porphyrins. This symptom is referred to as porphyrinuria.

Note: The most common localizations of skin damage caused by PCT are on the back of the hand, on the face, and on the neck.

Diagnosis and treatment of PCT

Diagnosis arises on the basis of anamnesis and symptoms, dark-red or brownish discolored urine, proven porphyrinuria, and possibly a liver biopsy that can detect metabolites by using fluorescence.

There is no causal treatment. Treatment primarily consists of the avoidance of triggering noxae and consistent avoidance of light exposure. Repeated bloodletting can provide recovery through a decreased erythrocyte count.

In addition, medicamentosus can be treated with chloroquine, which makes porphyrins complexed and renally excretable. With consistent protection from light exposure with clothing and sunscreen and avoidance of triggering noxae, a good prognosis exists for patients with porphyria cutanea tarda, which is determined by the extent of liver damage.

Etiology and pathogenesis of AIP

The second most common form of porphyria is acute intermittent porphyria (AIP). It is counted as acute hepatic porphyria and has its peak incidence in the third decade of life. It has been shown that only about 10% of the autosomal dominant inherited genetic defects turn into porphyria. On the other hand, about one-quarter of unrelated patients show de novo mutations. The affected enzyme is porphobilinogen deaminase with increases in the preceding intermediates: porphobilinogen, δ-aminolevulinic acid, and porphyrins. The genetic defect is located at various points of the gene on chromosome 11.

Apart from stress, infections, and hypoglycemia, a variety of medications, in particular, and other porphyrinogenic substances are triggers of an acute manifestation in this form. These triggers include alcohol, metoclopramide, furosemide, diclofenac, angiotensin-converting enzyme (ACE) inhibitors, statins, and many anesthetics such as barbiturates, among others.

Acute porphyria syndrome is very diverse in clinical presentation and often results in misdiagnoses. Leading the way are three main symptoms and the frequent association with intake of medication.

Abdominal discomfort with colicky pain and vomiting are key symptoms of AIP. In the case of acute abdominal pain with fever, the suspicion of appendicitis is obvious. An appendectomy scar is thus often found among patients diagnosed with porphyria.

Note: The cases of acute porphyria are often primarily treated surgically; thereby, anesthesia poses a great risk for the patients.

Neurologic–psychiatric symptoms of AIP are diverse and can occur in the form of peripheral nerve palsies, neuralgic pain, paresthesia, epilepsy, resentment, and psychos. A symptomatic triad is completed by the occurrence of cardiovascular symptoms, especially tachycardia and hypertension. AIP is not associated with increased photosensitivity.

Note: In cases of the triad of abdominal pain, neurologic–psychiatric symptoms, and tachycardia, a healthcare provider should always think about the differential diagnosis of porphyria.

Diagnosis and treatment of AIP 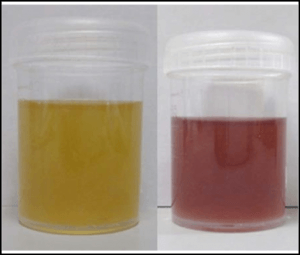 Even in this form, the anamnesis and symptoms are leading the way in the diagnosis, especially in the presence of the typical triad. In an acute episode, metabolites such as porphobilinogen and δ-aminolevulinic acid can be detected in blood and urine. Often, patients will produce discolored urine, which becomes discolored to dark red between acute attacks in 50% of cases when prolonged standing has occurred. Porphobilinogen can also be detected in stool.

Genetic tests are possible to confirm the diagnosis and determine the mutation. The discontinuation of possible causative medication is therapeutically the top priority. In addition, the education of patients about possible triggers is very important. In order to treat the symptoms, healthcare providers often prescribe harmless medications such as beta blockers and paracetamol. A current list of medications classified as safe can be found on the Internet. Subsequently, the heme synthesis can be curbed with glucose and heme arginate instead of δ-aminolevulinic acid dehydratase. The use of heme arginate is also possible for relapse prevention. Treatment of the last choice is liver transplantation.

Secondary (i.e. acquired) porphyria can have various causes. Progressive hepatocellular damage can, for example, imitate the appearance of porphyria cutanea tarda through decreased enzyme activity. Blood diseases, infections, and intoxications continue to be probable causes. An important differential diagnosis of AIP is chronic lead poisoning. Lead inhibits δ-aminolevulinic acid dehydratase and ferrochelatase of heme synthesis and, in this way, leads to the accumulation of aminolevulinic acid and porphyrins, which can also be detected in urine. A test should be done for the diagnosis of lead in the blood.

Long-term complications of porphyria include the following:

The drug database for acute porphyria. Retrieved from drugs-porphyria.org.