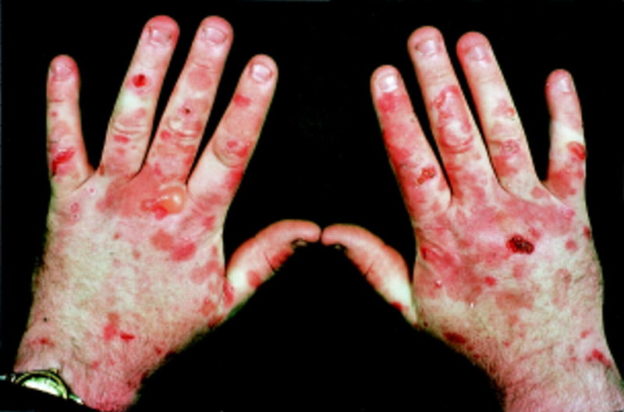 Porphyria is a group of diseases, which is characterized by a build-up of substances called porphyrins. These diseases usually affect the skin and the nervous system. A common feature in all porphyrias is the accumulation of porphyrins and porphyrin precursors in the body. Different types of porphyria involve a build-up of different chemicals.

This disorder is usually inherited from the parents when the gene that makes the heme is mutated. Some types of porphyria are autosomal recessive, while some are autosomal dominant. Some types, like the Porphyria cutanea tarda, are triggered by an increase in the iron in the liver. They are also triggered in patients suffering from Hepatitis C, patients that are alcoholic, and those who have HIV/AIDS.

It is estimated that these disorders affect 1 to 100 per 50,000 people around the world. The most common type of which is the porphyria cutanea tarda.

Different types of porphyria are all caused by a problem in the production of heme. The production of heme takes place in the liver and it involves a number of enzymes. Shortage or absence of these enzymes leads to an excess build-up of certain chemical compounds that are used to produce the heme. Specific types of porphyria depend on the type of enzymes lacking in the system.

Porphyrias are generally considered genetic in nature. When the gene passed from one parent is altered, there is a high risk of developing porphyria in the offspring if the gene-altered is responsible for producing the enzymes necessary in the synthesis of heme.

One common type of porphyria is porphyria cutanea tarda. Unlike most porphyrias, which are genetically transferred, this type of porphyria is an acquired disease. This disease becomes active when triggered by certain conditions or lifestyle choices. These include an excess intake of iron supplements, hepatitis C, smoking, drinking alcohol, and HIV.

Some drugs that include barbiturates, tranquilizers, sedatives, and birth control agents trigger some cases of acute porphyria. Other potential triggers for these conditions are smoking, fasting, infections, stress, sun exposure, menstrual hormones, and drinking alcohol.

Acute porphyrias are the types of porphyria that primarily affect the nervous system. This usually produces episodic crises known as acute attacks. Symptoms for this type of porphyria include abdominal pain, vomiting, hypertension, and tachycardia. Severe cases produce some neurological complications, including motor neuropathy, seizures, and sometimes coma. Some psychiatric symptoms which include anxiety, confusion, psychosis, and hallucinations may also be observed.

Symptoms for this type of porphyria include blisters, pain, itching, darkening, and thickening of the skin, skin swelling, and increased hair growth.

The different skin diseases in cutaneous porphyria are caused by excess porphyrins accumulating in the skin. Porphyrins, being photoactive molecules, are very sensitive to light exposure. When exposed to light, electrons are promoted to higher energy levels. When the electrons return to its ground state, energy is released. The energy released causes localized skin damage.

For the hepatic diseases related to porphyria, the following medications may be used. To manage the pain experienced by the patients, opioids are usually administered. Since there are possibilities of attacks in the patients, hematin may be taken in by patients. Beta-blockers like Atenolol may be administered to manage blood pressure. A high carbohydrate diet is also recommended to aid the recovery of patients.

To treat erythropoietic diseases, iron supplements are usually administered. Blood transfusion and a bone marrow transplant may also be done to the patient to improve the synthesis and supply of porphyrins in the blood.

Other treatments for porphyria include an intake of beta-carotene supplements, removal of blood (phlebotomy), use of chloroquine, and the use of sedatives to aid in sleeping and reduction of anxiety.

Since some forms of porphyria are genetic in nature, it can be said that the disorder cannot be fully prevented; however, avoiding or eliminating triggers can reduce symptoms. Some important factors to be eliminated include the use of recreational drugs, avoidance of mental stress, limiting drinking habits, and the avoidance of the use of certain antibiotics.

To prevent the occurrence of some erythropoietic symptoms, activities that reduce light exposure must be practiced; these include staying out of bright sunlight, the wearing of long sleeves, and the use of hats or umbrellas. Also, avoidance of exposure to too much light or radiation during surgery can also be observed.

Porphyria is diagnosed using different biochemical tests. Urine samples can be analyzed to test for acute porphyria by determining the porphobilinogen (PBG) in the samples. PBG is one of the first substances in the porphyrin synthesis pathway. In most cases of acute porphyria, the urinary PBG is reported to be elevated. Alanine may also be detected in urine samples.

Other tests that can be done to diagnose porphyria include computed tomography (CT) scans, chest X-ray, and echocardiogram (ECG).