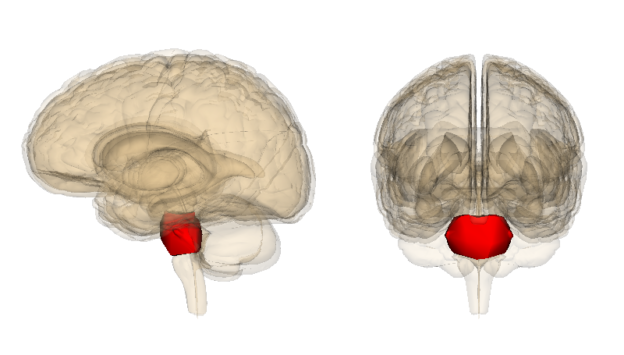 This condition is also known as Foville’s syndrome, caused by the blockage of the paramedian and the short circumferential branches of the basilar artery. The part of the brain affected is the pons. The structures of the pons affected by the blockage are:

It is also known as Marie-Foix syndrome, caused by the blockage of the long circumferential branches of the basilar artery and the anterior inferior cerebellar artery, causing a lesion in the pons. The structures within the pons which are affected by this lesion are:

This rare disorder is caused by the blockage of the superior cerebellar artery. 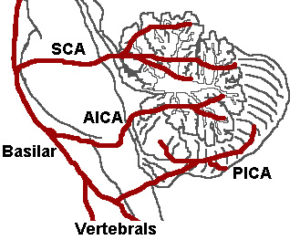 It is also known as dorsal midbrain syndrome, mainly caused by the tumor of the pineal gland which suppresses the rostral interstitial nucleus of medial longitudinal fasciculus. It is also associated with multiple sclerosis in the young females, AV malformation, obstructive hydrocephalus and stroke in older patients. This syndrome is characterized by: 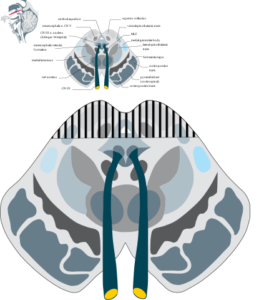 Image: “The shaded area shows the site of lesion in Parinaud’s syndrome.” by Madhero88 – Own work. License: CC BY-SA 3.0

A thorough workup of the causes of this syndrome through neuro-imaging such as MRI brain is essential before proceeding to any management plan.

It needs to be differentiated from other clinical conditions such as pineal cyst, Niemann-Pick disease, Wilson’s disease, and hydrocephalus. 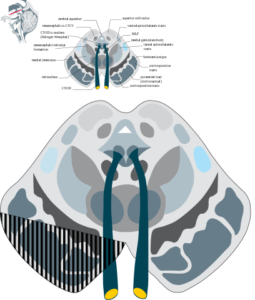 Image: “The shaded area shows the site of lesion in Weber’s syndrome.” by Madhero88 – Own work. License: CC BY-SA 3.0

It is usually caused by a unilateral lesion in the midbrain due to occlusion of the paramedian branches of the basilar artery. The structures of the midbrain affected by their presenting symptoms are as follows:

The infants born with Weber’s syndrome may develop convulsive disorders during the first year of their lives. They have lower intellect and become resistant to the treatment.

They have a large port-wine stain on the forehead and on one upper eyelid due to the abundance of capillaries over the ophthalmic branch of the trigeminal nerve.