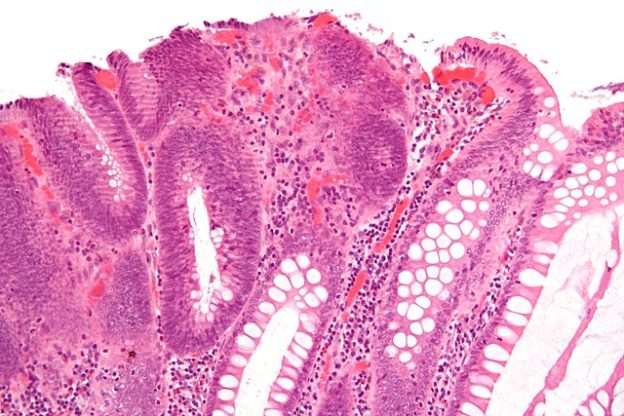 Image: “Micrograph of a tubular adenoma, the most common type of dysplastic polyp in the colon.” by Nephron – Own work.
License: CC BY-SA 3.0

Adenomatous polyps are most commonly associated with cellular dysplasia, which may lead to colorectal carcinoma. It takes 7–10 years for the carcinoma to develop. Mucosal epithelial cells are renewed continuously from the crypt cells towards the lumen owing to continuous shedding and turnover of the epithelium into the lumen. Dysplastic cells acquire invasive potential and transform into malignant carcinoma.

Non-neoplastic polyps are of the following types:

Juvenile polyps and juvenile polyposis coli (JPC) are hamartomas that could potentially develop into colorectal and gastric cancer. JPC refers to the presence of ten or more juvenile polyps along the GI tract and is usually associated with the SMAD4 mutation. Mutation of SK11 is also associated with hamartomatous polyps in Peutz-Jeghers syndrome. The risk of a polyp transforming into colon cancer is high and could also result in other malignancies, including those of the pancreas, stomach, and breast.

Morphologically, adenomas can be sessile, pedunculated, or non-polypoid flat or depressed lesions. Pathologically, they can be classified as villous, tubular, and tubulovillous adenomas.

Transformation of the epithelium into adenoma and then carcinoma can be explained by the following pieces of evidence:

Several theories have been proposed to explain the molecular basis for a polyp-cancer sequence, including hypermethylation, activation of oncogenes, and deactivation of the tumor suppressor genes. The first step in epithelial transformation is the hyperproliferation of the epithelium to form aberrant crypt foci and low-grade dysplasia, which is followed by high-grade dysplasia and eventually carcinoma. 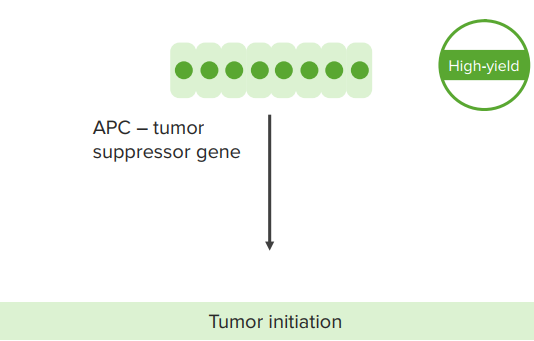 Tumor suppressor genes control cell division and proliferation. Loss-of-function mutations in both alleles lead to the loss of inhibition control over cell division and proliferation. The retinoblastoma tumor suppressor gene has either two somatic mutations in both alleles or one somatic mutation in a single cell with an inherited mutation of the other allele. Examples of tumor suppressor gene mutations include APC, P53, DCC, SMAD2, and SMAD4. P53 mutation on chromosome 17p is common in colorectal cancer. The P53 gene is responsible for cell cycle arrest during times of stress via activation of several genes and proteins which promote and apoptosis.

APC mutation is present in most cases of sporadic colorectal cancer and cases of FAP. The APC gene can be silenced via the Wnt pathway by phosphorylation and degradation of beta-catenin in the nucleus. Mutations of APC lead to the loss of the regulatory effect and accumulation of beta-catenin which, in turn, activates transcription factor Tcf-4. Activation of this pathway prevents the arrest of cell division, differentiation, and apoptosis. This further leads to the activation of the gastrin/cholecystokinin receptors, which in turn leads to inhibition of apoptosis and increase in cellular proliferation. SMAD4 mutation is associated with juvenile polyposis and sporadic cases of colorectal cancer as it acts as the central mediator in the TGF-β pathway.

Germline mutation in the base excision repair gene mutY homolog, MUTYH, is also associated with FAP and known as MUTYH-associated polyposis.

Cyclooxygenase inhibitors, including aspirin and sulindac, exert protective effects and prevent the progression of adenomatous polyps to colorectal cancer. Sulindac is helpful in patients with FAP and known to cause regression of colorectal polyps.

If one or two small tubular adenomas measuring < 10 mm are detected, a colonoscopy should be repeated after five years. Patients with more than three adenomas or those with advanced adenomas that are villous and large with high-grade metaplasia should be followed up after three years. Patients with small serrated polyps without dysplasia should undergo colonoscopy after five years. If the polyps are > 10 mm and show signs of dysplasia, a colonoscopy should be advised after three years.

A high-fiber diet rich in fresh fruits and vegetables, and abstinence from alcohol and smoking may prevent colorectal cancer. Aspirin has a proven protective role in preventing metachronous adenomas and colon cancer. COX-2 inhibitors, such as celecoxib, have been used with success in the prevention of colorectal cancer; however, they are associated with an increased risk of cerebrovascular incidents and heart attacks, which limit their use in high doses.

Approach to the patient with colonic polyps via uptodate.com

Adenoma-carcinoma sequence of colon via pathologyoutlines.com