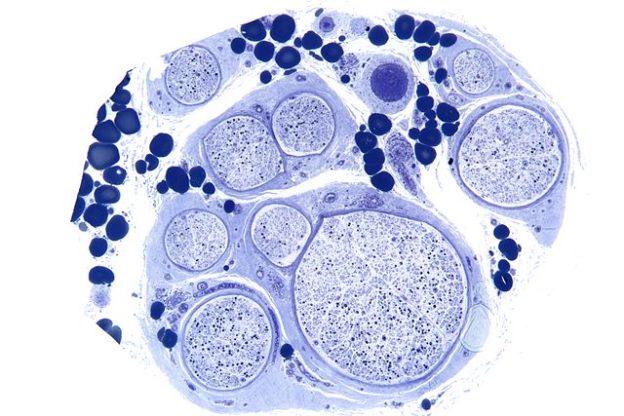 The term polyneuropathy summarizes different systemic diseases of the peripheral nervous system, including dorsal and ventral root ganglions. The nomenclature corresponds with the number of nerves involved:

Polyneuropathies can be classified based on:

Polyneuropathies can also be classified as follows:

Although the cause and severity of polyneuropathy can markedly differ, there are certain typical key symptoms:

Note: The goal of diagnosing polyneuropathies is to clarify the etiology in order to achieve successful therapy

Note: Diabetes mellitus and alcohol abuse combined are responsible for almost 50% of all polyneuropathies.

Other common causes are Guillain-Barré syndrome, infections with Borrelia, HIV, and vasculitides. The spectrum of causes of polyneuropathy is large. The following shows possible causes:

Case study: A 60-year-old patient has known for several years that his blood glucose levels have been in the pathological range. Over the past year, he has been experiencing slight sensory disturbances in his toes and foot soles. The skin is becoming dry. After a long walk, he notices pain-free changes in his left foot resulting in pressure points in his shoe.

The orthopedic examination, which includes X-rays of the foot, shows a fracture of the arch, the so-called Charcot foot. He receives orthopedic and podiatric treatment. With appropriate footwear and skincare, the patient will be able to walk normally again.

Now he is experiencing morning sensory disturbances in his right hand and is mostly unable to move the fingertips of the first 3 fingers. Some mornings, pain and clumsiness in the hand occur. The general practitioner suspects the sensory disturbance is the result of a polyneuropathy.

As described in the case study, symptoms usually begin slowly. In many cases, the 2 feet are simultaneously affected first (the longest nerve fibers are primarily affected). The sensory disturbances that occur are described as stocking- and glove-like by patients. These sensory disorders can have different classifications:

Clinical signs of damage to the autonomic nervous system

If autonomic nerve fibers are impacted, vascular dysregulation with distal cyanosis can occur, resulting in hyperhidrosis, anhidrosis, as well as trophic changes in the skin and nails. 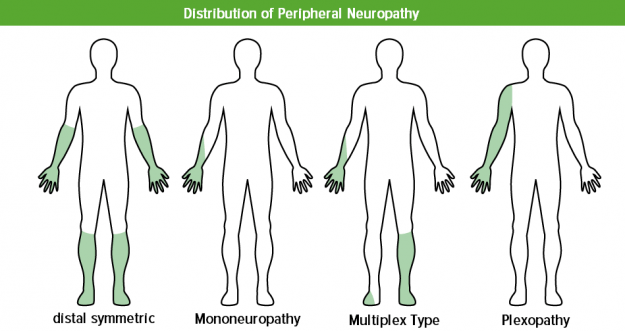 History of a familial predisposition is important in diagnosis.

Various laboratory parameters are indicative of possible causes. The levels of the following parameters should be examined via laboratory/chemical testing in order to determine the likely cause of polyneuropathy:

Neurography: A tool to distinguish between axonal, demyelinating, and axonal-demyelinating diseases.

In demyelinating diseases, the nerve conduction velocity is reduced. There is some temporal dispersion as some nerves conduct faster than others and thus cause a widening of the compound muscle action potential (CMAP) duration.

If the etiology is known, treating the underlying disease is recommended. The pain that develops due to neuropathy can be treated with different types of medications as follows:

Hereditary motor and sensory neuropathies are divided into 7 types. Only the first 3 are of clinical relevance and will be discussed in the following paragraphs.

Charcot-Marie-Tooth disease is the most common hereditary neuropathy. This autosomal dominant-type inheritance is among the demyelinating neuropathies. Affected individuals fall ill between the ages of 5 and 20 years.

Symptoms of Charcot-Marie-Tooth syndrome (HMSN I)

In most cases, positive family history and high arches result in the diagnosis of Charcot-Marie-Tooth syndrome. Biopsies find an onion-bulb-like arrangement of Schwann cells with simultaneous axonal degeneration. Demyelination extremely slows down the nerve conduction velocity which can be seen in neurography imaging (> 20 m/s). In approx. 70% of all cases, molecular genetic diagnostics show a duplication of the PMP22 gene.

Therapy focuses on treating the symptoms, as a cure is currently impossible.

The reduction of the nerve conduction velocity in individuals with HMSN II is less pronounced. Clinically, there are few differences between HMSN I and II; however, their biopsy findings are clearly different. HMSN II does not exhibit onion-bulb-like arrangements but rather displays axonal degeneration with secondary demarcation. Therefore, HMSN II is sometimes referred to as an axonal form of Charcot-Marie-Tooth disease.

HMSN III also exhibits an autosomal dominant inheritance. The clinical picture of this neuropathy is also very similar to HMSN I but is much more serious. Affected individuals only have a nerve conduction velocity of 10 m/s, and the disease already begins in the first decade of life.

The genesis of diabetic neuropathy has not been determined in detail. As of 2015, a multifactorial genesis is widely assumed. These factors include:

The above factors are thus intertwined to formulate the theory that, uncontrolled sugars in diabetics leads to non-enzymatic glycosylation that causes accumulation of advanced glycation end-products. This induces cytokine and adhesion molecules release that may damage nerves leading to neuropathies.

A patient with diabetic neuropathy displays a wide spectrum of symptoms. The following table provides an overview of common symptom groups. The most frequent is symmetric distal sensorimotor polyneuropathy.

Diabetic metabolism must be normalized in the best possible way (see treatments for diabetes mellitus). If the glucose levels are well adjusted, it is possible to prevent the progression of the symmetric form. Furthermore, α-lipoid acid can be used to counter nerve damage. Pain therapy consists of opioids and antidepressants, and anticonvulsants are used as co-analgesics.

In order to retain motor function, physiotherapy is important and useful.

The pathogenesis of alcoholic polyneuropathy

The combination of the direct toxic effect of alcohol and vitamin B deficiency usually occurs simultaneously (due to malnutrition) causing polyneuropathy. Characteristic signs are primary axonal damage and secondary demyelination.

Note: CDT in connection with alcohol abuse is an important exam question.

Absolute alcohol abstinence is pertinent. Furthermore, vitamin B complex should be prescribed. Axonal reinnervation is possible with abstinence but will be delayed.

Approximately 70% of the patients with sepsis and multi-organ failure will develop critical illness polyneuropathy (CIP).

Septic inflammatory reactions are suspected to give rise to CIP but the pathogenesis of CIP has not been fully determined.

CIP is frequently overlooked in intensive care as electromyography and measuring the nerve conduction velocity is required in order to make the diagnosis. In most cases, weaning the patient off the respirator is difficult because of CIP. EMG will reveal pronounced pathological spontaneous activity.

Once patients recover from the severe underlying disease, complete remission from CIP is possible and common. However, in intensive care, problems may develop due to prolonged time on the respirator.