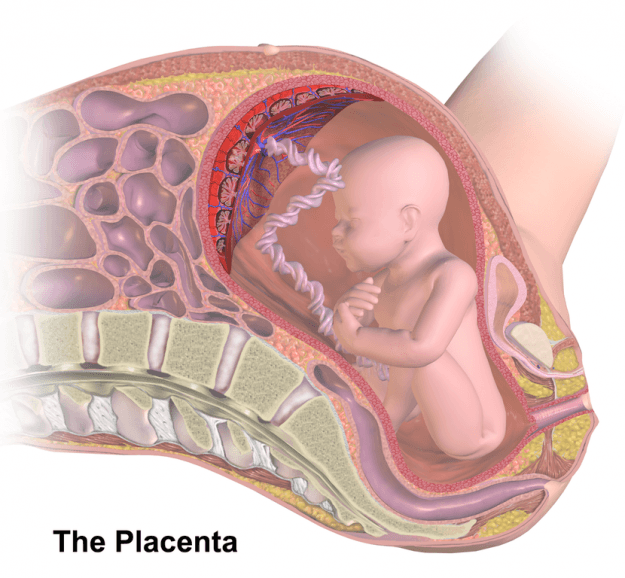 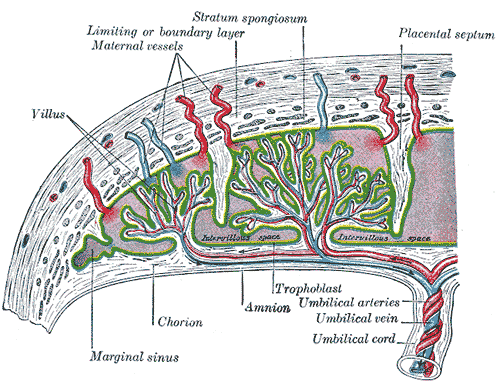 Image: Maternal blood fills the intervillous space. Nutrients, water, and gases are actively and passively exchanged, then deoxygenated blood is displaced by the next maternal pulse. By Henry Gray. License: Public domain.

The placenta is a connection between mother and child. The exchange of gas and substances takes place via the so-called placental barrier. This is created at the end of the third week of gestation from the endothelium of the fetal blood vessels, the mesoderm, the cytotrophoblast, and the syncytiotrophoblast. This barrier ensures that there is, at no time, a direct link between the blood circulations of the mother and the child. The exchange surface of the placenta is the surface of the chorionic tree. Maternal blood flows around this surface and facilitates the exchange of substances with it.

The maternal placenta is then expelled after the termination of pregnancy or after birth.

The placenta has, in addition to the metabolic function, both endocrine and immunologic functions.

A major task is the exchange of substances through the placental barrier. Most substances are transported in accordance with their concentration gradient. Other molecules, such as water, lactate, and glucose, are transported actively.

During pregnancy, the placenta represents another major endocrine gland. It is related to the mother’s pituitary gland and the child’s adrenal glands. Because the placenta is not hormonally active early in the pregnancy, hormone production is maintained first by the ovaries and the pituitary. These produce steroids (estrogen and progesterone), human chorionic gonadotropin (hCG), and human placental lactogen (hPL).

The concentration of estrogen increases steadily in the course of pregnancy. The hormone causes the uterus to grow and supports, toward the end of pregnancy, birth preparedness. Progesterone is an important hormone during early pregnancy. In the early weeks of pregnancy, it is produced by the corpus luteum graviditis; this function is then usually taken over before the 12th week of pregnancy by the syncytiotrophoblast. The progesterone lowers the uterine muscle tone.

The hCG is produced by syncytiotrophoblasts. The hormone concentration rises continuously until the end of the first trimester. In the earliest weeks of pregnancy, the hCG concentrations should double every 2 days.

The hPL is also formed by the trophoblast. It is structurally similar to somatotropin and thus has growth hormone–like effects. In addition, it has an insulin-stimulating effect. On the one hand, this promotes the supply of glucose and amino acids—on the other hand, it is often the cause of gestational diabetes.

The causes of a malfunction of the placenta in the acute form may be a vena cava compression syndrome or intrapartum and inferior placental abruption.

Chronic placental insufficiency arises in maternal systemic diseases such as anemia or diabetes mellitus or in the presence of uterus myomatosis. In addition, pregnancy-related disorders, including multiparity, rhesus incompatibility, and abortions.

Chronic placental insufficiency is less associated with maternal symptoms than with growth restriction of the fetus and intrauterine asphyxia. The symptoms may result in the sudden death of the fetus.

The diagnosis of acute placental insufficiency is provided by the CTG. Typical findings are late decelerations, a silent type of oscillation, or persistent bradycardia.

Treatment is initially causally and causes of the insufficiency should be eliminated. The choice of treatment also depends on the week of gestation.

Acute causes can be eliminated, e.g., by a left lateral position for the vena cava compression syndrome. In chronic forms, the risks and benefits of treatment should be weighed. Among other things, this involves weighing the risk of prematurity against the risk of a chronic shortage supply. Accordingly, it is then decided whether delivery by cesarean section is recommended.

Gruenwald, P. (1975). The placenta and its maternal supply line: Effects of insufficiency on the fetus. Lancaster, England: MTP.