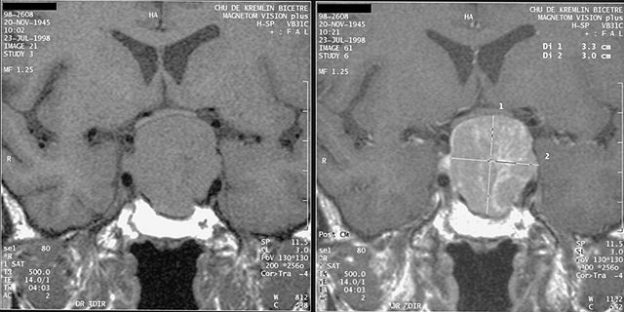 The pituitary gland/hypophysis is in the Sella turcica/pituitary fossa which is a part of the sphenoid bone and forms the cranial fossa. The gland is divided into:

The posterior pituitary, on the other hand, releases hormones that are from the hypothalamus via the neurological connection between the two parts. These hormones include oxytocin and vasopressin.

The intermediate part of the pituitary gland is not fully functional in humans, but it is thought to be responsible for melanin synthesis and the maintenance of skin color.

Structures in connection with the pituitary gland

Structures in close association with the pituitary gland are affected by its enlargement and thus form part of the pathological presentation of these diseases when affected. These relations include:

It is also known as the thyrotrophic feedback mechanism and it controls the body’s metabolism by regulating the release of thyroid hormones from the thyroid gland.

In normal status, the hypothalamus releases a thyrotropin-release hormone that stimulates the pituitary gland to release thyroid-stimulating hormone.

The thyroid-stimulating hormone induces the thyroid hormone biosynthesis at all stages and its release into circulation as triiodothyronine and tetraiodothyronine (T3/T4). The level of circulating thyroid hormones regulate the amount of thyrotropin release hormone secreted from the hypothalamus via a negative feedback mechanism in that when the level of T3 and T4 is low in circulation, there is an increased release of thyrotropin release hormone and TSH that induces an increase in thyroid hormone synthesis and vice versa.

In hyperthyroidism, the hypothalamus is inhibited and the levels of thyrotropin and thyroid-stimulating hormone fall. The axis is also influenced by a variety of other local and neurohumoral factors.

Disorders of the pituitary gland arise in:

The most common cause of these disorders is pituitary tumors which are mostly benign (Adenomas) in nature.

Certain syndromes arise from the deranged hormone state and its effects. These states include: 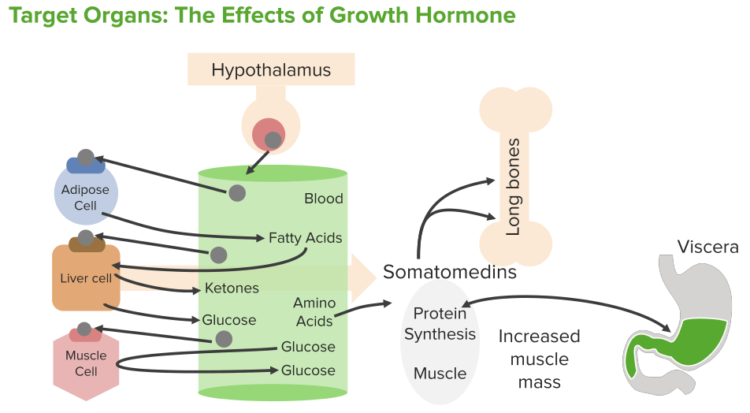 Pituitary gland masses are mostly adenomas that are benign and slow-growing masses. They mostly involve the anterior pituitary gland; however, they may involve any part of the gland and they may also be cancerous.

It is traced and named from the cells of origin as follows:

They are classified based on the size as:

They can also be classified based on staining characteristics as: 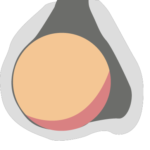 They represent 10–15% of all diagnosed tumors and 90% of these are adenomas.

Prolactinomas are mostly seen with women.

They are diseases of adults representing the 4th–5th decade of life as the most commonly affected group.

These mutations are thought to be carried down in an autosomal dominant inheritance pattern, thus anyone with the mutation and have environmental trigger factors for pituitary tumorigenesis is at an increased risk of developing a sellar/pituitary mass.

They present with features of:

The patients may also present with features of mass effects:

CT scan of the head offers an additional assessment, especially when there is a hemorrhagic event in the Sella turcica or erosion of nearby bone as seen with craniopharyngiomas.

Laboratory work-ups for hormonal assays to determine the functionality of the specific mass such as:

The most immediate attention should be controlling the levels of hormones in circulation, i.e., the replacement in deficiency and inhibition of hypersecretion.

Surgical removal of large masses with mass effect via a Transsphenoidal approach.

Radiotherapy to reduce the growth of a pituitary mass.

Chemotherapy with temozolomide, carboplatin, and etoposide reducing the growth of the mass.

The conditions are associated with a predicted course with avoidance of symptoms and surgery to control complications.

Pituitary apoplexy is a disease of sudden pituitary gland impairment of vascular supply leading to the development of headaches, blurring of vision, and altered mental status. This is a vascular accident that may arise from acute hemorrhage or infarction of the gland.

Sheehan syndrome/post-infarction hypopituitarism is a rare entity of pituitary hypofunction that arises from hypovolemic shock during and/or after childbirth.

Whereas the cause of Sheehan syndrome is mainly hypovolemic shock, pituitary apoplexy is also associated with:

Pituitary apoplexy occurs in 10% of pituitary adenomas and is mostly seen in the post-operative period of management. It has a slight male preponderance in a 2:1 male to female ratio and it is more common in the 4th–6th decade of life.

Sheehan syndrome is a rare disease seen exclusively in pregnancy and the postpartum period.

The pituitary gland is supplied by a low-pressure system that enters via the hypophyseal stalk that lacks a well-defined collateral blood supply making it very sensitive to minute changes in demand-supply mismatch and mechanical compression episodes.

Pituitary apoplexy arises from massive and rapid enlargement of a gland located in a small cavity that compresses its own blood supply leading to ischemia and death. The enlargement may also induce a rupture damaging the unique blood vessel supply to the remaining part of the gland causing apoplexy.

Sheehan syndrome results from pregnancy-induced hypertrophy and hyperplasia of the pituitary lactotrophs in preparation for the upcoming period of lactation. However, this enlargement is not accompanied by the needed increase in blood supply and, worse still, the enlargement may be accompanied by blood loss and hypovolemic shock during childbirth, leading to the low blood supply and ischemic injury to the gland.

This is a rare entity exclusively seen in pregnancy and the postpartum period.

The patients with Sheehan syndrome present with:

MRI of the brain offers the best soft tissue study, more so to the pituitary region, thus, it is the imaging method of choice. It can view minor bleeds missed by CT scans.

CT scan of the head is the imaging of choice in cases of trauma or hemorrhage but may miss minute bleeds in this region.

Laboratory work-ups for pituitary hormonal assays to determine the functionality of the remnant gland.

Histology shows necrosis of the gland in hemorrhagic regions.

Surgical therapy with emergency decompression of the accumulating bleed and control of further damage.

The conditions are associated with:

It is a condition of an elevated level of pituitary prolactin hormone in circulation (>30 ng/ml). The hormone is responsible for breast development and lactation.

Some common causes of pathological hyperprolactinemia include:

Causes of physiological hyperprolactinemia include:

Hyperprolactinemia occurs in less than 1% of the general population and in association with galactorrhea and amenorrhea.

It has a slight female preponderance and, when it occurs in men, it attacks early and in a more dramatic way.

In women, the disease presents with:

In men, it presents with:

CT scan of the head offers an additional assessment for Sella turcica masses, especially when there is an erosion of nearby bone as seen with craniopharyngiomas.

Laboratory work-ups for prolactin levels which should be greater than 200 ng/ml in hyperprolactinemia.

Pregnancy testing due to a similar feature in pregnancy.

Visual field testing to assess for any complications.

Hyperprolactinemia is associated with:

A third of the patients have complete resolution with treatment. The disease is associated with high recurrence rates of up to 80% if managed surgically, thus necessitating the need for long-term medical treatment to avoid recurrence.