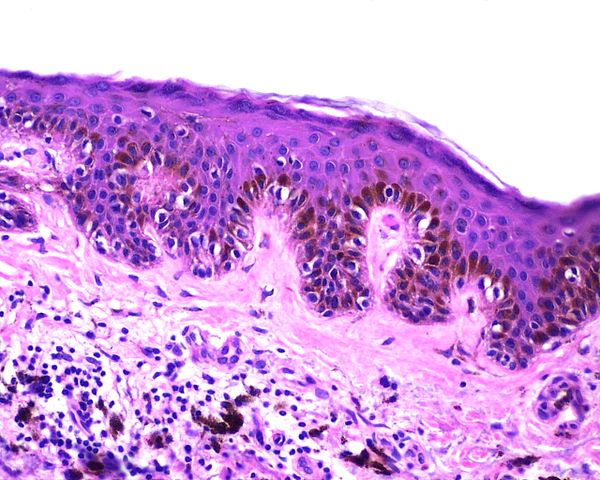 Nevi are brown, flat, or elevated skin lesions that can occur anywhere on the body.

Pigmented skin lesions in children are common and can be classified into malignant and benign variants. Malignant melanoma is rare in children.

Pigmented melanocytic nevi are hamartomatous collections of melanocytes that are derived from epidermal melanoblasts or dermal Schwann cells. These melanocytic nevi can either be congenital or acquired after birth.

A clonal nevus is benign and characterized by the focal proliferation of pigmented dermal melanocytes. The main distinction between clonal and typical melanocytic nevi is that the latter arises from epidermal melanocytes and found to be usually multiple in number. 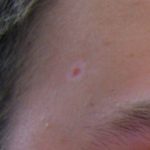 Halo Nevus (mole with a white ‘halo;’ zoomed in.

A halo nevus is a typical pigmented melanocytic nevus that is surrounded by an area of skin hypopigmentation, which explains the adjective, halo.

An atypical melanocytic nevus is characterized by the presence of cellular atypia within. Dysplastic nevi are capable of malignant transformation into melanoma.

Congenital melanocytic nevi are common and can be identified in up to 1% of newborns. On the other hand, acquired melanocytic nevi usually appear after the first year and peak in number during the second or third decades of life.

Clonal and halo nevi mostly appear after birth. Halo nevi are usually solitary lesions, but multiple halo nevi are seen in up to 25% of patients.

The prevalence of atypical melanocytic nevi in the general population is estimated to be 7%, although this figure can be as high as 59% in patients diagnosed with malignant melanoma.

Despite the poor understanding of the etiologies and pathogenesis of congenital and acquired melanocytic nevi, several risk factors in the development of an increased number of pigmented nevi have been identified. Prolonged sun exposure, the use of cortisone, corticotropin, growth hormone or chemotherapy, and immunosuppression are common risk factors in children. Studying pigmented nevi is important because their number and size positively correlate with the risk of malignant melanoma. 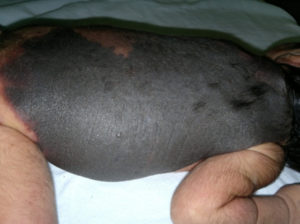 Image: “5-day-old girl (head to the right) with a giant congenital melanocytic nevus over the back, neck, buttocks, and left thigh. Histopathological findings show nevomelanocytes throughout the thickness of the dermis extending into the subcutaneous tissue. No other complications were reported.” by S. Sharma , N.L. Sharma, V. Sharma – Giant Bathing Trunk Naevus with Multiple Congenital Melanocytic Naevi. The Internet Journal of Pediatrics and Neonatology. 2012 Volume 14 Number 1. DOI: 10.5580/2aa3. License: GFDL

Clonal nevi can be considered as a borderline condition between malignant melanoma and benign pigmented skin lesions; they usually carry p53 mutations in their core melanocytes.

Recent studies focus on elucidating the underlying cause of halo nevi being associated with a higher risk of malignant transformation and the reason behind the appearance of a halo. Skin hypopigmentation around the nevus is believed to be the consequence of an immune response to the proliferating melanocytes. Activated cytotoxic T-cells release a cytotoxic substance that destroys melanocytes around the forming nevus.

The diameter of the pigmented skin lesion should be determined since there exists an association between nevus size and risk of malignant transformation. Small nevi have a diameter < 1.5 cm, while that of medium nevi range between 1.5 and 19.9 cm; nevi > 19.9 cm are considered large. The risk of malignant transformation of small and medium-sized nevi is considered to be at the baseline level.

Infants who experience seizures may have neurocutaneous melanosis if there exists a large congenital melanocytic nevus. The most common cutaneous sites for congenital nevi in children with central nervous system involvement are the head, neck, and face.

Acquired melanocytic nevi usually have different clinical features compared to congenital nevi. The former usually have a verrucous surface and can be pedunculated. Clonal nevi appear light brown to blue or black in color and are usually well-demarcated and focal. Halo nevi are solitary and display a surrounding area of depigmentation.

The presence of cytological atypia within a nevus cannot be confirmed using histological examination and molecular testing. However, certain risk factors, such as the presence of malignant melanoma or abnormal nevi that change over time in size and character, increase the risk of cellular atypia in acquired nevi.

When a child presents with a pigmented skin lesion, the primary goal of approach should aim to determine the malignant potential of the lesion. The most important risk factors for malignant transformation are the size and number of nevi.

In addition to the clinical features of congenital and acquired nevi, advanced alternative techniques can be used to confirm the diagnosis of benign skin lesions over malignant melanoma.

Dermatoscopy can reliably differentiate between a benign pigmented nevus and malignant melanoma. The former has a uniform and regular network of pigmentation, lacks a blue-white veil, rarely displays vascular patterns, lacks a regressive center, and can be cystic. On the other hand, malignant melanoma usually presents with dark and irregular pigmentation, a blue-white veil, areas of regression and scarring, and may display irregular vascular patterns. Cyst formation is usually not observed.

Biopsies reveal clonal nevi to be located within the dermal layer. The focal proliferation of dermal melanocytes is usually observed. Melanin content is high within the epidermal melanocytes and keratinocytes, which explains the dark color of nevi. These lesions typically do not show any dysplastic features or cytological atypia. Halo nevi show lymphocytic and histiocytic infiltrates on microscopic examination.

Small congenital melanocytic nevi do not require any specific treatment except for close monitoring for changes in lesion characteristics. Lesions that change symmetry, show irregular borders, change color, or increase in diameter should be excised and a biopsy must be obtained for histological examination.

Prophylactic lesionectomy is recommended for large- or medium-sized pigmented nevi in children. Large pigmented scalp nevi should be removed during infancy, if possible. Delayed surgical intervention is associated with an increased risk of recurrence, scarring, and poor cosmetic results.

It is recommended to completely remove clonal nevi despite it being benign. Children with halo nevi should be indicated full-body examination due to the association of higher numbers of halo nevi with increased risk of malignant melanoma.

Atypical nevi that change color, size, shape, or border should be completely excised and a histologic examination performed to assess the degree of cytological atypia and presence of molecular abnormalities such as p53 mutations. Small atypical nevi with minimal atypia may be excised without a free margin or followed-up routinely to assess changes.

Halo nevi are benign with very low chances of morbidity. Cosmetic or physical appearance is often the only concern.

Melanoma can develop from atypical nevi; however, these chances are as low as 2/200,000 cases. The risk of developing melanoma is higher in individuals with multiple atypical nevi lesions compared to those with single or few lesions. However, a family history of melanoma is more helpful in diagnosis as opposed to the number of nevi present.

Patients with nevi should be educated to avoid exposure to sunlight and UV tanning beds and advised to use sunscreens to minimize the harmful effects of UV rays.

Patients and family members should be instructed to monitor lesions regularly and seek medical help in case of occurrences such as a sudden increase in lesion size, bleeding, itching, or ulceration.