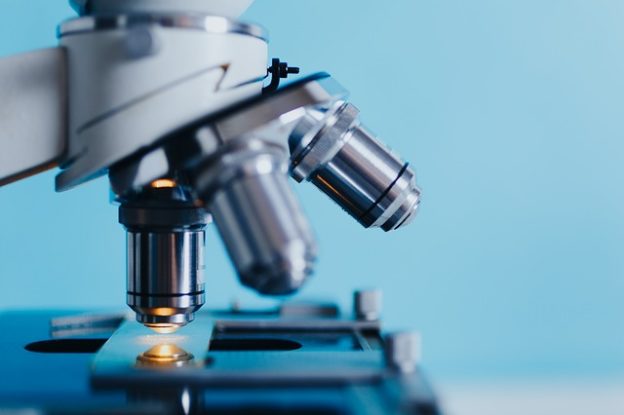 Unlike simpler organisms, the human cell actually contains organelles that perform different functions. In order for it to maintain a physiologic state, a cell has to keep organelles from leaking its contents that might inactivate or destroy a nearby cellular structure. 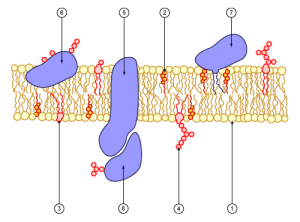 Example
Examples are lysosomes, peroxisomes, and mitochondria. These organelles, when destroyed, could leak out enzymes, radicals, and caspases which could result in the premature death of a cell if prompted too early.

Example
The lipid bilayer of the plasma membrane separates the intracellular fluid compartment from that of the extracellular environment. 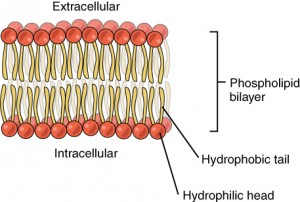 The phospholipid membrane of the cells is structured in a way that prevents it from dissolving in a rather aqueous environment and allows it to hold itself together. Phospholipids actually contain a polar (hydrophilic) head and a non-polar (hydrophobic/lipophilic) tail.

In order to create a layer capable of partitioning cells and organelles, the non-polar ends of several phospholipid units unite with the polar heads in contact with the aqueous solution. With these in mind, one could surmise that a plasma membrane bilayer is flexible as the non-polar tails that are in with contact other tails can slide through each other. Since water is polar, it could not easily pass through the lipid bilayer because of the inner nonpolar layer.

You may have also learned that extracellular fluid is further classified as either intravascular, interstitial or transcellular. What actually separates these compartments is also the partitioning capability of tissues that works pretty much the same way as plasma membranes do. Tissues such as blood vessel walls or connective tissues surrounding the hollow parts of the bodywork by preventing fluids from the blood or from the extravascular space to shift into places where they should not be present.

It is important to take note that extracellular and intracellular fluid compartments actually have different amounts of ions and solute concentrations dissolved in them. Any changes in the amounts of these, such as in faulty fluid shifts, could disrupt the homeostasis that is supposed to be maintained by effective partitioning.

Transport through the Cell Membrane

The plasma membrane of human cells is described as selectively semi-permeable. This means that although it does not allow most substances to come in and out of the cell just as easily, it does allow for some to get through the lipid bilayer. However, if the plasma membrane of cells fails to possess transport mechanisms, transport of these substances would only be governed by passive movement of particles along a gradient. This would mean an equalization of the concentration of solutes in both intra- and extracellular fluid compartments.

With the help of the transporters found in the cell membrane, a homeostatic concentration of these solutes are maintained without having to depend mainly on simple passive diffusion of substances into and out of the cell, although some substrates do transfers passively.

Pores in the Cell Membrane

Pores appear much like tubes embedded in the phospholipid bilayer. They provide simple communication between the intra- and extracellular fluid compartments, allowing for passive diffusion to occur. These structures are made up of proteins and are designed to remain integrated into the plasma membrane but open to the external environment.

Image: “Simple Diffusion across the Cell (Plasma) Membrane” by PhilSchatz. License: CC BY 4.0

With this design in mind, one could actually assume that it allows several solutes to come into and out from the cell easily but put in mind that these structures have varied luminal sizes and electrical charges. This keeps the pores somewhat selective in the type of substrate that can pass through them.

Example
A good example of protein pores are aquaporins that efficiently transport water into and out of the cell. It usually does not transport any other substrates. There are 13 known types of aquaporins distributed all throughout the human body.

These aquaporins work their selectivity by allowing water molecules to enter the lumen of the tube in a single file. With the small diameter of the tubes, ions and other substrates that have a water molecule attached on to it cannot fit into the lumen and therefore stay inside or outside the cell.

The prototype for pores is actually one of the aquaporins – aquaporin type 2 or AQP2. Like with some types of aquaporins, the diameter of AQP2 is actually modulated by protein-protein interaction. This is very apparent during the control of water reabsorption in the kidney.

When anti-diuretic hormone (ADH) is secreted such as in times of dehydration, reabsorption of water through the collecting tubules of the kidney is actually initiated in order to produce concentrated urine and conserve water in the body. This occurs when ADH binds to certain V2 receptors in the apical membrane of the cells composing the collecting tubules. This, in turn, results in a cascade of substrate and second messenger activation leading to the structural changes in the AQP2, ultimately leading to an increase in its diameter.

Channels in the Cell Membrane

Just like pores, channels can be very selective when it comes to choosing which substrate can pass through them. However, they are distinguished from pores by their ability to be controlled by electrical signals (voltage-gated channels) or chemical substrates (ligand-gated channels) that react with the gates found in their structures.

These reactions lead to changes in the densities, diameters, or characteristics of the channels, allowing only the ions and substrates that can fit to pass through them. Another mechanism that could explain the selectivity of channels is the presence of selectivity filters that are thought to bring about the selectivity of certain channels to particular ions.

As mentioned earlier, channels contain gates that are known to guard their lumen. These structures appear as extensions from the actual integral protein in the plasma membrane that are able to move about, therefore closing or opening the channels. Changes in the voltage inside or outside the cell can trigger a change in the structure of the gates, allowing it to inhibit or accommodate charged ions into and out of the cell. This is known as voltage-gating.

On the other hand, when the configuration of the gates is changed with the help of substrates, ligand-gating is thought to have happened. In this case, a structural change is achieved by a change in the conformation of the proteins composing the gates or changes in the chemical bonding present in the same gates.

Example
The prototype for this type of transport mechanism is a nicotinic acetylcholine receptor or nAChR. The α-subunit Ach binding pocket of this receptor binds with acetylcholine released by nerve cells, resulting in changes in the channel’s filters. This allows positively charged ions (Na+) to rush into the cells. This is evident in contracting muscles and ganglionic impulse transmission.

As you may have observed with the table above, there is a big gradient in the ion and substrate concentration between the intra- and extracellular environments. If plain passive diffusion was the only transport mechanism available for these substances, there would be equalization in the amounts suspended in both compartments.

So how is the difference in concentrations maintained? This is done with the help of active transport. This allows ions and other substances to go against their concentration or electrical gradients, thereby maintaining their physiologic concentrations.

Active transport is made possible with the help of proteins that pump ions and substrates across the plasma membrane. Generally, these pumps make use of energy in the form of ATP in order for themselves to be activated, hence their other name ATPases. As these pumps cleave a phosphate bond creating ADP, the liberated energy is thought to cause conformational changes in the pump structure, accommodating specific ions or substrates and transfer them across the membrane.

Image: “Example of primary active transport, where energy from hydrolysis of ATP is directly coupled to the movement of a specific substance across a membrane independent of any other species.” by LadyofHats. License: Public Domain

Example
A very prominent example of ATPases is the Na+-K+ ATPase. It is the one responsible for maintaining a relatively constant gradient of both Na+ and K+ outside and inside the cell. It also maintains a negative electrical charge inside the cell.
A Na+-K+ ATPase is composed of a carrier protein which is further made up of an α- and a β-subunit. The α-subunit being the larger one contains 3 receptor sites that can accommodate 3 Na+ ions facing the inside of the cell, and 2 receptor sites for K+ facing the outside. When activated, it exchanges 3 Na+ ions for 2 K+ ions creating a more positive charge in the extracellular compartment. With this ability, Na+-K+ ATPases are said to be electrogenic.

Co-transport denotes a mechanism by which a certain ion couple with another substance while binding to the carrier’s receptor, allowing it to cross the plasma membrane along with the other substance.

Example
A good example of this is the prototype of carriers: the sodium-glucose co-transporter 1 molecule or SGLT1. This works when a Na+ ion couples with a molecule of glucose in order for it to cause conformation changes in the carrier protein, allowing it to cross the membrane together with the glucose molecule.

Counter-transport works similarly, only in a 2-way fashion. Ions such as Na+ bind to the receptors found facing the outside of the cell while other ions such as Ca2+ or H+ bind on the opposite side. Conformational changes caused by this coupling exchange Na+ from the outside for either Ca2+ or H+ from the inside.