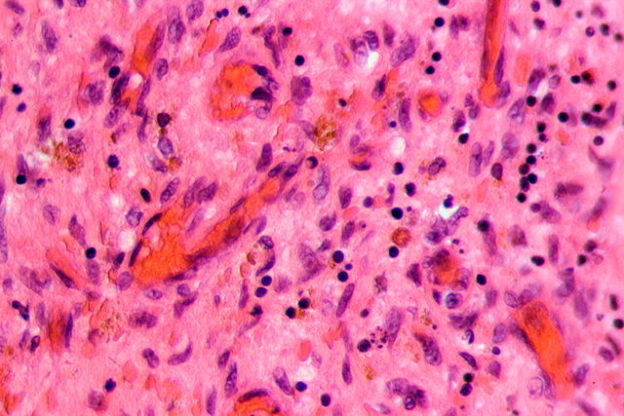 Definition and Background of Phlebothrombosis and DVT 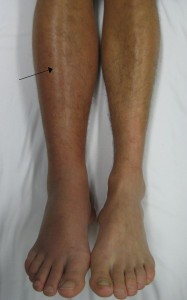 As the majority of these blood clots occur in the deep veins of the calf, we will focus on DVTs (deep vein thrombosis). DVTs are a very serious problem in patients and many protocols has been put in place to try and reduce the number of DVTs that occur. The main complication that worries healthcare professionals is VTE (venous thromboembolism). A VTE is when a DVT leads to a pulmonary embolism (PE); this occurs when a blood clot from the deep veins of the calf breaks off (embolizes) and travels towards the heart and into the pulmonary vasculature.

Epidemiology of Phlebothrombosis and DVT

Occurrence of phlebothrombosis and DVT

1 in 1000 adults per year suffers from DVT. It is rare in children and hardly ever leads to VTE. DVT is a disease of aging as it is much more common in the elderly compared to younger adults. It occurs at a rate of 1/10,000 for people under 40 and increases to 5.5/1,000 at the age of 80. There is an increase in the age group of women of childbearing age as VTE is a known complication of pregnancy (0.001 %).

VTE is much more common in those who undergo orthopedic operations as recovery usually involves immobilization; nearly all who undergo such procedures are now given prophylaxis (heparin) to try and prevent this. It is unknown why, but Caucasians have a higher VTE risk than Asians.

Genetic conditions can lead to thrombophilia which increases the chance of DVT formation. Different conditions are more common in different parts of the world and this, therefore, affects the incidence of DVT; e.g Factor V Leiden. DVT occurs in 25 – 50 % of surgical patients.

Etiology of Phlebothrombosis and DVT

Causes of phlebothrombosis and DVT

Virchow’s triad divides most of the causes of DVT into three categories:

This does not cover immune system activation, oxygen concentration or platelet activation.

Patients with the following characteristics are at a greater risk for phlebothrombosis and DVT:

Others: intravenous drug use, HIV, infection, cancer, chemotherapy, pregnancy and the postpartum period, Hughes syndrome (or antiphospholipid syndrome, an autoimmune disease in which an overactive immune system produces antiphospholipid antibodies (aPL) which cause the blood to clot too quickly both in veins and arteries), dehydration, smoking.

DVTs form when the clotting cascade is activated inappropriately. Virchow’s triad states that there are three main scenarios where this occurs:

DVTs most commonly form in the deep veins of the calf. The veins affected the most include the femoral, popliteal and iliofemoral veins. Proximal DVTs are more likely to cause a PE and are generally considered more serious. DVTs can also form in the veins of the pelvis. DVT commonly starts to form in the venous valves; the nature of the blood flow causes this area to be hypoxic. This along with venous stasis, can activate certain clotting factors such as the hypoxia-inducible factor-1. Clots consist of red and white blood cells, platelets and fibrin. Once a DVT has formed, it may cause more clots to form as it can induce inflammation.

The calf muscles are responsible for squeezing the veins in the leg and therefore maintain venous flow. Patients who are immobile (bedridden, undergoing an operation, etc.) and do not walk for a long amount of time do not use their calf muscles frequently and therefore are at higher risk of developing a DVT due to venous stasis. 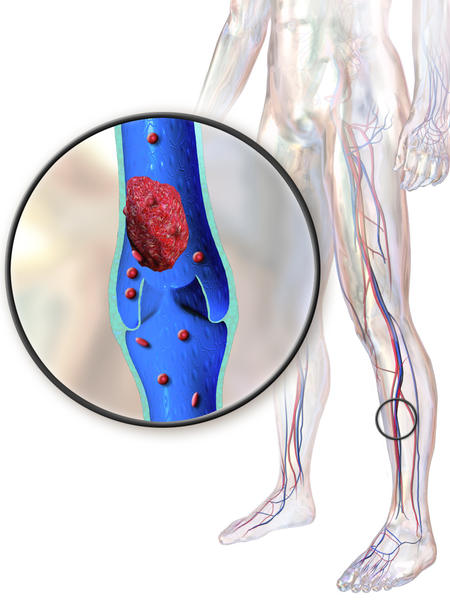 Endothelial damage causes the formation of a DVT. This is because the coagulation cascade becomes activated once the clotting proteins in the blood are exposed to tissue factor (in damaged endothelial cells), which cleaves prothrombin into thrombin. This damage can occur as a result of vasculitis, trauma (intravenous drug users) or from medications such as chemotherapy. 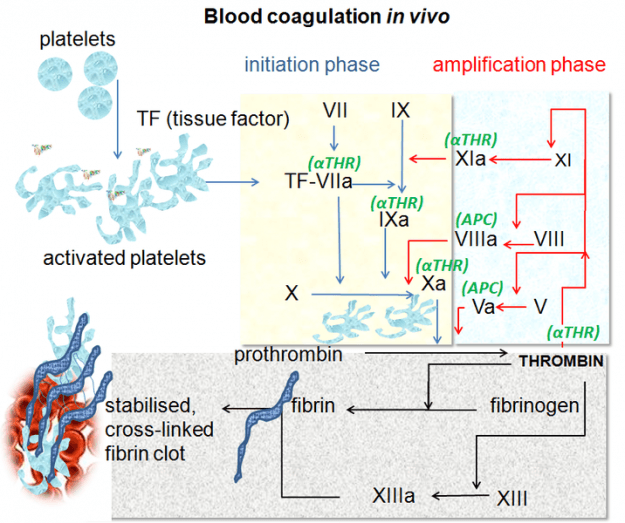 Some conditions can increase the risk of DVT by making the blood more coagulable. Such conditions include nephrotic syndrome and antiphospholipid syndrome. Some of these conditions are genetic and run in families; these include thrombophilia and factor V leiden mutations. Blood can become hypercoagulable for other reasons such as the increased amount of exogenous estrogen from hormonal replacement therapy or from the combined oral contraceptive pill. DVT is most common in hospital patients (especially those undergoing orthopedic or major operations) and may occur on long flights in people with low risk of developing a DVT (such as tennis player Serena Williams).

Two main complications can result from DVT; these are PE and post-thrombotic syndrome (see ‘Complications’ below). Pulmonary embolism causes damage by obstructing pulmonary arteries and causing ventilation-perfusion mismatch and cardiac strain; depending on the size and what artery has been blocked, the patient can present with shortness of breath or they can suddenly collapse and die.

Signs and Symptoms of Phlebothrombosis and DVT

DVTs most commonly affect the calf and patients typically present with the following;

Pulmonary embolus presents in various ways depending on what artery has been obstructed;

As differential diagnoses, ruptured Baker’s cyst and cellulitis should be considered.

Diagnosis and Investigations of Phlebothrombosis and DVT

Methods of detecting phlebothrombosis and DVT

Clinical examination along with a detailed history can raise suspicion of DVT. A positive D-dimer test is a quick screen that can rule out DVT most of the time if it is negative. The patient should then undergo imaging, usually ultrasound, to confirm DVT. Scoring systems are sometimes used to estimate the probability of DVT and to determine which test is to be performed; e.g. Wells score. The following list comprises possible investigations:

The results are classified as follows:

DVT is categorized according to the following types:

Treatment and Prevention of Phlebothrombosis and DVT

The following treatments are recommended:

Low molecular weight heparin (enoxaparin 1.5 mg/kg/24 h subcutaneous) or fondaparinux. It is now preferred over unfractionated heparin; no monitoring, fewer doses, fewer long term side effects and has less effect on thrombin but the same effect on factor Xa.

LMWH inhibits coagulation by selectively inhibiting factor Xa via anti-thrombin (reducing the amount of thrombin that forms from prothrombin). It only has a weak effect on thrombin itself.

There are many contraindications to anticoagulation. Anticoagulative therapy should only be started once the patient has been evaluated for risks of excessive bleeding, other conditions that could constitute a contraindication and interactions with other medications.

Cancer patients require heparin for 6 months and then they need to be re-evaluated. LMWH is given to the majority of patients undergoing surgery and to patients at risk of developing DVT during their hospital stay. 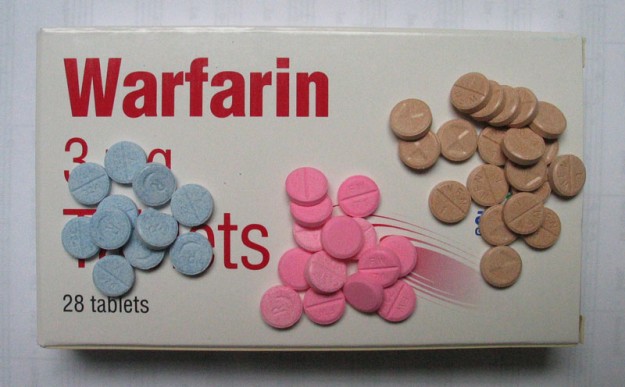 Risks inherent in phlebothrombosis and DVT

As discussed above, the most serious complication of DVT is PE. This can lead to minor respiratory distress or sudden death. The outcome depends on the size and number of clots.

Post-thrombotic syndrome is the commonest complication of proximal DVTs. Symptoms consist of pain and swelling. Leg ulcers may develop in the long-term and mobility can be reduced. In some cases, patients complain of paraesthesia. PTS occurs in 25 – 50 % of patients and 7.5 % of these patients develop severe PTS.