It is defined as the study of the kinetics of drug absorption, distribution, excretion, and metabolism. Pharmaceutical scientists study the pharmacokinetics of drugs to enhance the efficiency of drug delivery and, in the process, reduce the risk of toxicity to the patient during drug therapy. Different drugs tend to have different drug kinetics. There are also some drug delivery systems available that can enable pharmaceutical scientists to study different rates of drug release.

Drugs usually work by binding to a receptor and producing the desired effects. The concentration of drug present at the site of the receptor determines the intensity of the effect of the drug.

Other factors affecting the drug responses include the mechanism by which signal is transmitted into the cell by secondary messengers, some receptors present on the cell surface, and other regulatory factors that control gene translation and protein synthesis.

For a drug to be considered effective, the drug must be readily absorbable in sufficient quantity. If the drug cannot be absorbed readily by tissues, no drug effect will happen. The drug should also be easy to distribute to the target tissues. Drugs should be able to attach themselves to target tissues to lessen its unnecessary effects to other tissues. The last important characteristic of a good drug is that it is not metabolized very quickly. This is an important factor so that it can maximize its effect on the target tissues.

The rate of absorption of the drug is affected by some factors. These factors include lipophilicity, solubility, ionization, degradation, metabolism and physiology. Three factors affecting the drug absorption are given focus, namely lipophilicity, acid sensitivity, and BBB (blood-brain barrier) penetration.

Drugs are sometimes modified to alter the properties of drugs. To make the drugs more lipophilic, the polar groups in the drug molecules should be masked. For example, the alcohol (-OH) groups of phenolic and alcoholic drugs can be converted to less polar esters or ether groups. These specific alterations are sometimes unwanted as these polar groups may have special interactions also with the receptors. In cases like this, prodrugs that can temporarily mask the polar groups may be employed.

In some instances also, the inclusion of polar groups in the drug structure may be important. This is mostly the case when the drug is too lipophilic that may inhibit drug-receptor interactions.

Because of this, there is a need to incorporate an electron-withdrawing group to reduce nucleophilicity of the compound, making it less susceptible to acid hydrolysis. Incorporating a benzene ring in the sides of the penicillin can make the penicillin compound less sensitive to acids, increasing the possibility of drug action.

In the late 1900s, Paul Ehrlich demonstrated the existence of Blood-Brain Barrier by injecting aniline dyes into the blood of experimental animals. He was able to observe that all of the organs of the animals were stained by the dye, except the brain.

It was later then discovered that the central nervous compartments contain layers of tightly packed endothelial cells that can only allow small lipophilic drugs to cross by diffusion. The barrier consists of at least one lipid membrane that can accommodate hydrophilic molecules to enter into the extracellular spaces of the brain.

The drug molecules should be able to penetrate the blood-brain barrier for drug action to occur. 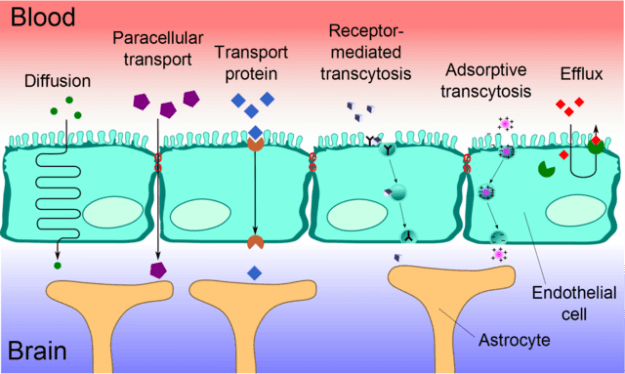 Example: Morphine, a very strong analgesic, has only small penetrating ability into the blood brain barrier because of the presence of the two OH groups in its structure. Masking these OH groups with non-polar groups increases the lipophilicity of the drug, thereby increasing its penetrating ability.

Compared to morphine, the structure of codeine includes a methyl group attached to the hydroxyl oxygen. Since the addition of an alkyl group decreased the polarity of the original OH group in morphine, codeine has ten times more penetrating ability compared to morphine. Higher is the effect of esterifying the –OH groups of morphine with acetate groups in a diamorphine molecule. Since both OH groups are masked in the process, the molecule becomes more lipophilic and eventually increased BBB penetration by 100 times.