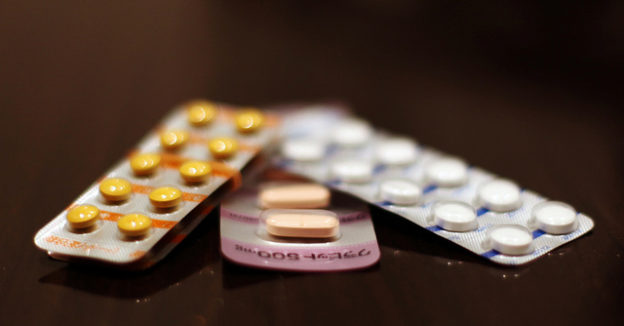 A receptor is that component (macromolecule) of a cell (on or inside the cell) that interacts with the drug, and this interaction leads to a chain of events that alter the activity of the cell.

Important: Drug binds to the receptors to illicit a biological response (toxic/therapeutic).

Effectors are molecules that act in response to the drug (or more precisely, the drug-receptor complex) and participate in the aforementioned chain of intracellular events leading to the drug’s effects.

Affinity is the measure of the strength of the bond between the drug and its receptor. The affinity of a drug to its receptor helps determine the dose of the drug: low affinity would indicate the need of a higher dose to form enough drug-receptor complexes that would lead to a significant effect (see figure). 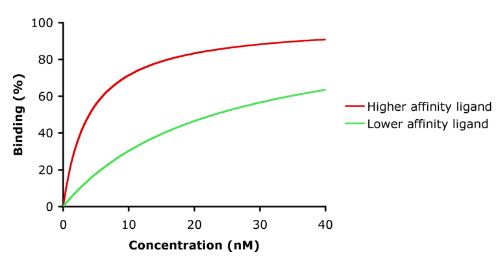 Selectivity is the preference of the drug to one receptor or its subtype (as compared to other receptors or other subtypes). In other words, it is the ability of the drug to produce one pharmacological effect over others. If a drug is selective, it will preferably bind to one receptor, but it can bind to others by increasing its concentration. For example, verapamil normally blocks Ca-channels, but it can block Na-channels at high concentrations.

Specificity is the ability of the drug to bind to only one receptor. Atropine is technically specific because it acts only at acetylcholine (ACh) receptors. However, atropine is not selective because it binds to all subtypes and causes myriad pharmacological effects.

When the drug interacts with the receptor to produce a series of events leading to a pharmacological effect, it is called agonism. For example, isoprenaline is a β adrenoreceptor agonist.

When the drug interacts with the receptor but does not produce any series of events, thereby “blocking” the potential action (physically or chemically), it is called antagonism. For example, propranolol is a β adrenoreceptor antagonist.

When the action of a drug is increased when given in the presence of another drug, it is called synergism. Examples are aspirin and paracetamol.

Efficacy is the property of the drug to produce the (desired) biological effect. Efficacy is often used when comparing or evaluating drugs in clinical trials.

The potency is the concentration of a drug required to produce an effect of a specified intensity.

When applying these concepts to clinical settings, potency merely indicates the dose of the drug, whereas efficacy indicates the magnitude of the response (regardless of the dose).

Excretion is the irreversible removal of the drug from the body. Excretion mainly occurs from the liver and the kidneys, but other organs (e.g., lungs) can also be involved.

There are five basic types of transmembrane receptors, which act, after binding to the drug or the ligand, in different ways (see figures).

A number of molecules (called second messengers) can be involved in those chain of events. The function of the cascades is to amplify the signal of the drug. As mentioned earlier, G-protein coupled receptors act via second messengers. A G-protein contains an α subunit that binds guanosine triphosphate (GTP) and the β and γ subunits that anchor the protein in the membrane.

Other examples of second messengers are diacylglycerol (DAG), inositol 1,4,5-triphosphate (IP3), both of which are activated by the Gq type G-protein; because G-protein receptors use phosphorylation as the mechanism of action, they are often susceptible to the phenomenon of desensitization.

Upregulation (i.e., increase in the number) of receptors occurs when the activity of the receptor is lower than usual (e.g., due to long-term administration of an antagonist). For example, administration of beta-blockers upregulates β adrenoreceptors. Thus, if β-blockers are abruptly stopped, it can cause rebound hypertension because of the sudden stimulation of a large number of β adrenoreceptors.

Downregulation (i.e., decrease in number) is the inverse of upregulation. It occurs due to repeated or long-term administration of an agonist. Along with downregulation, desensitization of the receptor to the drug may also occur. This is a physicochemical alteration in the receptor which makes it unresponsive to the drug; this is also called tachyphylaxis and is seen in chronic drug use, for example.

Important: The process is useful in the prevention of cell damage due to the high concentration of an agonist.

When the response of the drug is plotted against its dose [A], it shows a hyperbolic curve; if the log of the dose (log[A]) is used, a sigmoidal curve is seen.

This curve can be used to detect the effective concentration (or dose) of the drug at which 50% of the maximal response (EC50) of the drug is obtained. As mentioned earlier, EC50 is used to calculate/compare the potency of drugs.

Emax is the (minimum) concentration at which the maximum effect of the drug is observed. At Emax, all the receptors are occupied by the drug. 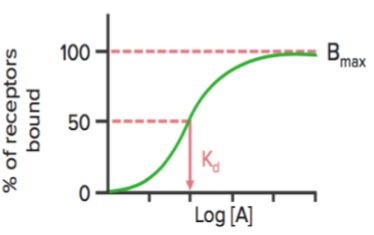 When the receptor binding status (% of receptors bound) is plotted against drug concentration ([A] or log[A]), it shows a similar hyperbolic (or sigmoidal) curve.

Bmax is the maximal binding of the drug. It is the concentration, expressed as picomoles per mg protein, at which all specific receptors are bound to the drug. As a result, Bmax can be used to calculate the density of the receptor site in a particular preparation.

When an agonist binds to a receptor, it may produce a series of events that eventually lead to the pharmacological response. This series of events may amplify the drug’s effect such that only a relatively small amount of the drug-receptor complexes may be needed to lead to a maximal response. In this case, when the maximal response is seen, a percentage of receptors remain unoccupied by the drug. These receptors are called spare receptors. 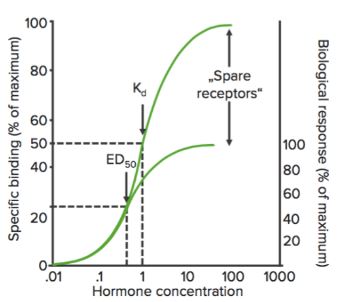 Spare receptors, at least theoretically, increase the sensitivity of the drug.

Adverse effects of a drug are usually dose-dependent. To investigate the effectiveness and toxicity of the drug, its effects are tested in a population and plotted against concentration or dose. Sigmoid curves (if log concentrations are taken on the X-axis) are obtained, and they can reflect the effects observed.

For example, in the following figure, a sedative/hypnotic agent shows the sedative action at a certain concentration range and death beyond that range. The dose (or the concentration) at which the drug shows the desired effect (sedation) in 50% of the population is ED50. 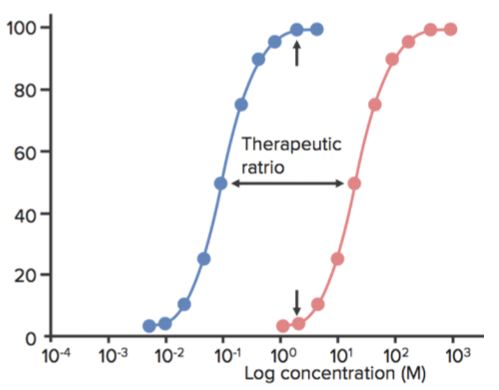