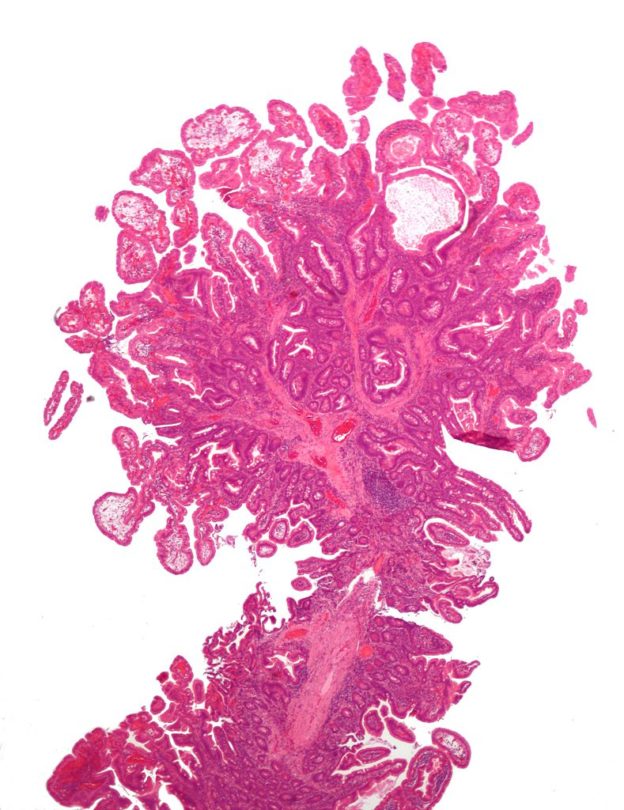 Role of Genetics in the Development of Neoplasms

The causes and risk factors for colonic neoplasms are usually multi-faceted and could involve both endogenous and exogenous determinants. It is often difficult to single out a specific primary cause for tumors and cancers because of the constant interaction of both heredity and environmental factors.

However, the pathogenesis of tumor development, regardless of the cause, always starts when an anomaly in a cell’s genetic component occurs. Evidence supporting this fact has been made possible with the help of advanced DNA sequencing methods, allowing the detection of certain mutations and deletions in DNA. This has been helpful in strengthening correlations between genetic factors and colon tumor development.

The core of tumor development, as mentioned, lies in a certain aberration in the genes of the cell. These damages can either be inherited in the germline or through exposure to certain viral or chemical carcinogens. Rarely, they can also arise from a random shifting in the genetic sequence.

In a healthy human body, aberrant (or tumor-like) cells are normally eliminated from the system with the help the body’s own immune system. However, predisposed individuals may not be able to effectively eradicate these precursor cells, leading to continuous proliferation. Since alterations in the DNA can be inherited by daughter cells during mitosis, they will contain the same defects and pass them on to the next generations of cells. Therefore, cells of a single polyp or cancerous growth are of a product of the same genetic mutation.

When altered, these regulator genes promote the expression of other genes, thus allowing them to function at an excessive rate or have an entirely new function altogether. Proto-oncogenes are dominantly inherited and produce again in function and/or expression – meaning even heterozygous genotypes will be prone to tumor production.

Naturally, they inhibit tumor growth. Mutations in the tumor suppressor genes are categorized as a loss of function and, therefore, are inherited recessively. However, this is not always the case (e.g. haploinsufficiency).

Mutations in these genes inhibit the expression of cellular factors that promote cell death, meaning a malfunction can lead to “immortal” cells.

A mutation/malfunction in DNA-repair genes can increase the likelihood of further mutations with every subsequent cell division.

Hamartomatous Polyps of the Colon

Hamartomatous polyps are usually caused by mutations in the germline. These alterations can appear on proto-oncogenes and tumor suppressor genes, resulting in the growth of polyps can either occur as an isolated occurrence confined in the large intestines or part of an inherited syndrome. 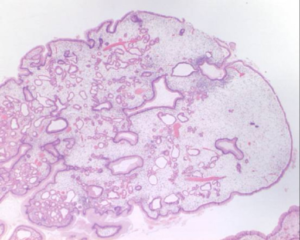 Juvenile polyps are focal growths of the intestinal epithelium and can extend into the lamina propria. Morphologically, not much difference exists between polyps that occur sporadically and those associated with a tumor syndrome. In predisposed children younger than 5 years old, juvenile polyps commonly present in the rectum. Symptoms or manifestations include rectal bleeding, intussusception, intestinal obstruction, and polyp prolapse.

Juvenile polyps are usually less than 3 cm in diameter, pedunculated, smooth and reddish. Upon dissection of these polyps, dilated cysts containing mucin and byproducts of the inflammatory process can be found. The rest of the structure is mainly composed of lamina propria with embedded neutrophils and an attenuated or normal muscularis mucosae.

Juvenile polyposis, an autosomal dominant syndrome, usually manifests with multiple (3 to 100) tumors/polyps of the same characteristics in the same location. Single polyps are usually not associated with any tumor syndrome. 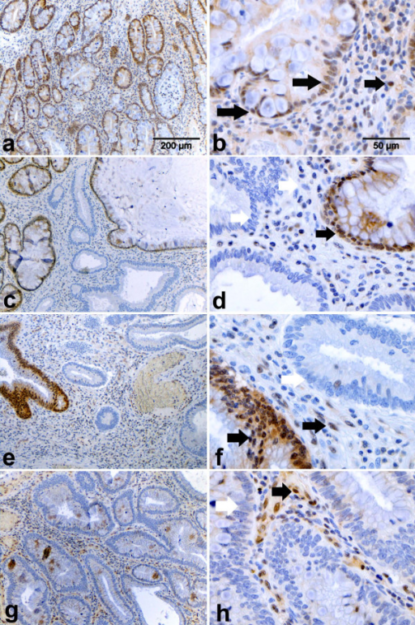 Complete pathogenesis of juvenile polyps is still unclear. However, it has been hypothesized that mucosal hyperplasia is the initial cause of development. This is supported by the fact that alterations in the regulatory pathways for cell growth are consistent with the development of autosomal dominant juvenile polyposis.

The most common genes involved in the development of juvenile polyps include:

Not all cases of juvenile polyps contain mutations in these genes. 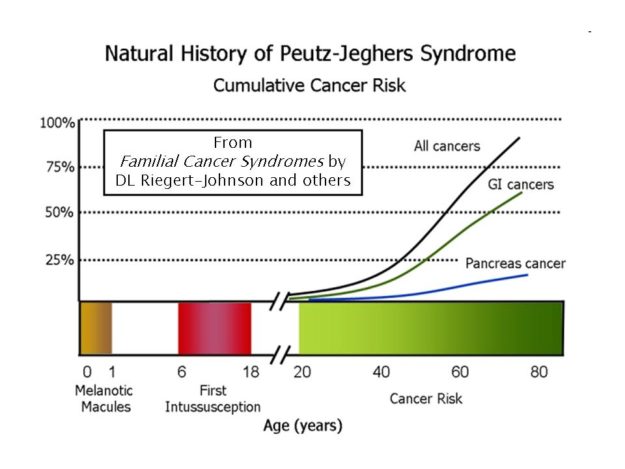 Image: “A graphical representation of the natural history of Peutz-Jeghers syndrome. Most patients will develop melanotic macules during the first year of life and a patient’s first intussusception usually occurs between the ages of six and 18 years old. Cumulative lifetime cancer risk begins to rise in middle age. Cumulative risks by age 70 for all cancers, gastrointestinal (GI) cancers, and pancreatic cancer are 85%, 57%, and 11%, respectively.” by Beaujolaisgamay. License: Public Domain

Peutz-Jehgers Syndrome is much rarer than juvenile polyposis and usually presents by the age of 11 years-old. Manifestations include hamartomatous polyps in the digestive tract and macular hyperpigmentation in the mucous membranes and skin. Although the latter can be mistaken as freckles, its presence in the mucosa is a distinguishing characteristic.

Polyps in the gastrointestinal tract can cause intestinal intussusception and other digestive problems. Polyps associated with this syndrome may present within the intestines or extra-intestinally, and they have a high risk of malignancy.

The polyps associated with this syndrome are most commonly found in the small intestines. They may also occur in the other parts of the digestive tract, bladder, and the lungs. They usually appear large and pedunculated. They look lobulated in terms of contour. Histologically, they are distinguished by their arborizing networks made of connective tissue, smooth muscles, lamina propria and glands, and the intestinal epithelium may appear normal.

In half of the cases of Peutz-Jeghers syndrome, there are germline altercations in the STK11 gene. This gene works as a tumor-suppressor and controls the growth and metabolism of erratic cells. It is also inherited in autosomal dominant fashion. 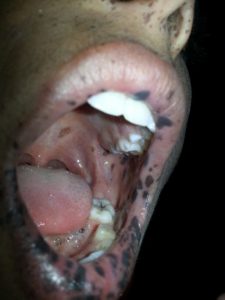 Since Peutz-Jeghers polyps can sometimes look very similar to other hamartomatous polyps, an understanding of its characteristic features important for diagnosis. These include:

Patients often present with surgical emergencies like obstruction and bleeding and may require multiple surgeries.

Otherwise known as hereditary non-polyposis colorectal cancer or HNPCC, Lynch syndrome is one of the autosomal dominant traits associated with colon cancer development. It is the most common syndromic form of colon cancer. This was originally brought about as a way to cluster related cancers that occur at several sites including the colorectum, endometrium, stomach, ovary, ureters, brain, small bowel, hepatobiliary tract, pancreas, and skin.

The most common mutations associated with HNPCC are in the MSH2 and MLH1 genes, other important sites of mutation in about 15 % of cases are MSH6 and PMS2 genes. These genes express proteins needed for the detection, removal, and repair of abnormalities during DNA replication (DNA repair). These mutations usually behave dominantly. In cases where the normal copy of the defected gene undergoes mutation or silencing, the development of the tumors tends to accelerate even further. Problems in the mismatch repair usually occur at microsatellites, which are regions containing short repeating sequences. The presence and abundance of microsatellites all over the human genome influences HNPCC tumors’ tendency to occur in many areas of the body.

Since colonic tumors occurring with HNPCC are similar in appearance and behavior when compared to sporadic tumors or those associated with other syndromes. It should be noted that the identification of the erratic genes and the determination of unstable microsatellites are important for their diagnosis. This can be achieved by performing DNA analysis and immunohistochemical assays on patients younger than 50 years of age with colorectal cancer and a strong family history of colorectal or endometrial cancer. Recent studies show that patients also have an increased risk of breast and prostate cancer.