Springs are elastic objects used to store mechanical energy in their coils owing to their ability to stretch and/or be compressed. They are usually referred to as coil springs. As a spring is compressed from its resting (non-mobile) position, it has the capability of exerting an opposing force in relation to the change in length it has undergone. 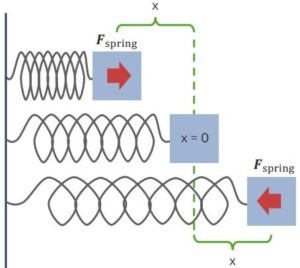 The opposing force existing in the mechanical aspects of the spring is referred to as restorative force and is based on Hooke’s Law. This is the force required to restore the spring to its resting or equilibrium position.

The equation for restorative force can be represented as follows:

x = displacement of the spring from the equilibrium position

The spring constant is always positive since only the magnitude is considered. It is represented as Newton per centimeter (N/cm) or Newton per millimeter (N/mm).

Springs have an elastic limit, which refers to the extent to which it can be stretched without altering its ability to return to its original length. As long as this limit is not exceeded, the spring displays elastic behavior; however, if exceeded, it portrays plastic behavior. Hooke’s law holds true only if the spring is within its elastic limit.

Springs can oscillate; in other words, they can produce a repetitive variation in motion between their two extreme states, stretched and compressed, starting from a midpoint (the resting or equilibrium point).

When a spring is stretched and held in place, an object at the end of the spring has no velocity since it is not in motion. The force will act in a direction opposite to that of the stretch. This explains the negative sign in the equation representing Hooke’s Law. This force tries to restore the position of the spring to its equilibrium point. The displacement is denoted as ‘x,’ while the maximum displacement that the spring can undergo is represented as the maximum amplitude (A). When an object at the end of the spring is released, it will be pulled towards the equilibrium point with velocity ‘v.’ 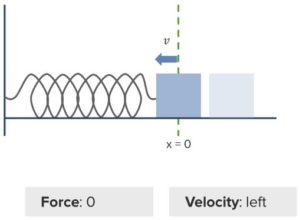 At the equilibrium point, ‘x’ would equal 0, since the spring is passing through this point as it is being compressed to oppose the stretch. The spring continues to compress owing to its inherent velocity and passes equilibrium until it reaches the minimum amplitude at which the velocity is 0. At this point, the spring possesses a restorative force that acts in the opposite direction enabling it to return to equilibrium.

This cycle continues until the spring finally stops at the resting point. This back and forth motion comprising stretch and compress is termed an oscillation. Upon completion of several oscillations, the spring stops moving and returns to its resting point, where both ‘x’ and ‘v’ equal 0.

Various aspects can be determined based on spring oscillations and their properties. The frequency ‘f’ indicates the number of cycles per second the spring undergoes, while the period ‘P’ denotes the time between oscillating motions. The two traits bear an inverse relationship and can be represented as P = 1/f.

Let us look at the frequency to determine the properties that affect this variable. The frequency is affected by the spring constant ‘k’ and mass of the spring ‘m.’

Energy Conservation of a Spring

Energy is a combination of kinetic energy ‘K’ and potential energy ‘U.’

Before the spring is released after being stretched, the system can be considered to be at rest. At this point, kinetic energy does not come into play. Thus, Kinitial = 0. Similarly, since there is no potential energy at the equilibrium state, Ufinal = 0. This simplifies the equation to: 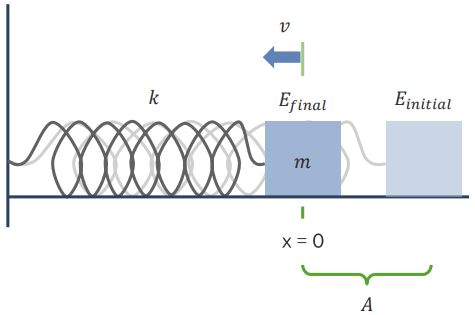 This principle is used in the manufacture of kitchen scales as well as devices that use springs, such as the suspension system in cars and retractable pens.

A pendulum is a weight suspended from a frictionless pivot enabling it to swing freely. Initially, before swinging, the pendulum rests straight downward at its resting or equilibrium position. Once it is displaced sideways, the swinging commences with oscillating back and forth motions. The pendulum swings in this manner since there is a restorative force to propel it to the equilibrium position. 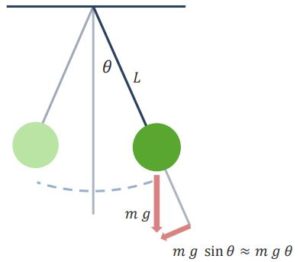 The restorative force of a pendulum drives it back to its equilibrium point after it has been displaced. The pendulum has a restorative force and oscillating pattern similar to that of a spring. A swinging pendulum passes through the resting position and continues to swing until it reaches a certain distance past the equilibrium point; it stops here momentarily and swings back in the opposite direction.

This oscillating motion continues until the pendulum eventually stops swinging.

M = mass of the swinging object

ɵ = swing angle from the midpoint

Various aspects can be determined based on the oscillations of a pendulum. The frequency ‘f’ indicates the number of oscillations of the pendulum per second, while the period ‘P’ denotes the time between oscillating motions. The two traits are inversely related and can be represented as P = 1/f

Let us look at the frequency to determine the properties that affect this variable. The frequency is affected by the gravitational energy ‘g’ and the length of the pendulum ‘L.’

It is to be noted that the mass on the pendulum does not affect its swing. 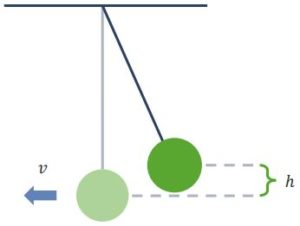 Pendulum oscillations are governed by kinetic and potential energies. When a pendulum is displaced and subsequently released, it moves through the equilibrium point.

The energy of the system before displacement equals the energy possessed by the pendulum as it moves through the equilibrium point. This is the law of conservation of energy in a pendulum.

Thus, Einitial = Efinal. Since there is a difference in the vertical location of the pendulum at its initial and final stops, the equation can be depicted as

Energy is a combination of kinetic energy ‘K’ and potential energy ‘U.’