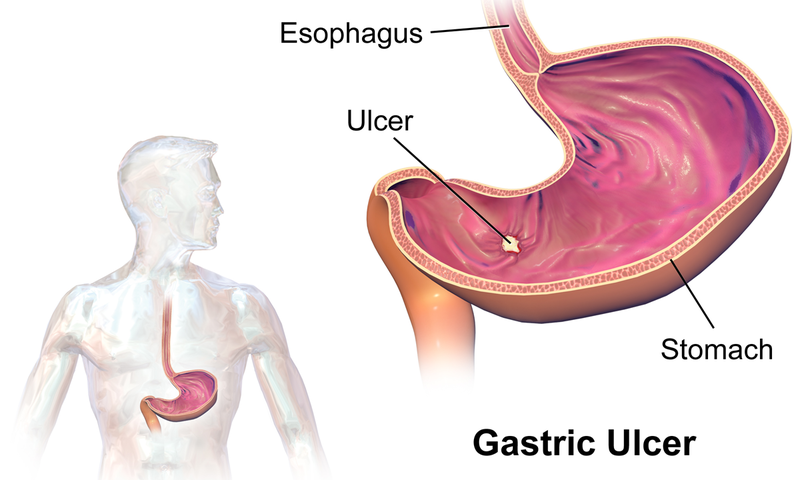 Definition and Background of Peptic Ulcer

There is a physiologic balance in normal conditions between gastroduodenal mucosal defense and gastric acid secretion. When this balance between the defensive mechanisms and the aggressive factors gets disrupted, mucosal injury occurs, which results in the developing of peptic ulcer. These aggressive factors include H. pylori infection, NSAIDs, alcohol, smoking, acid, bile salts and pepsin. 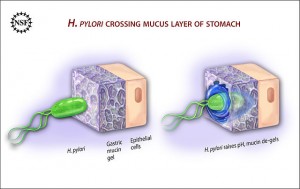 The use of nonsteroidal anti-inflammatory drugs (NSAID) is a common cause for the developing of peptic ulcer disease. They render the mucosa vulnerable to injury by disrupting the mucosal permeability barrier. Other risk factors, when accompanied with NSAID use, increase the risk of developing peptic ulcers; these factors include advanced age, female sex, history of a previous peptic ulcer, long-term use or high doses of NSAID and severe comorbid diseases.

Several hypersecretory states may cause peptic ulcers including:

Approximately 20% of peptic ulcer disease patients have a family history of the disease. Studies have also shown a weak association between blood type O and the development of duodenal ulcers.

Approximately 4.5 million people are affected with peptic ulcer disease every year in the United States with nearly 10% of the US population showing evidence of a duodenal ulcer at some time in their lives.

The frequency of peptic ulcer disease in other countries is variable and is determined by the association with the major risk factors of the condition, such as NSAID use and H. pylori infections.

Presentation of a Peptic Ulcer

Obtaining a thorough medical history is essential in the diagnosis of peptic ulcer disease; however, history alone is not enough to reach a definite diagnosis.

Other symptoms and manifestations include:

Alarm features that require referral to a gastroenterologist and further workup include:

The physical findings in uncomplicated peptic ulcer disease are nonspecific, and they include:

If the peptic ulcer perforates, patients will suffer from a sudden, severe sharp abdominal pain. Generalized and rebound tenderness, as well as guarding and rigidity, will be revealed by physical examination.

Classification of a Peptic Ulcer

Type I
Type I gastric ulcers are located on the lesser curvature near the angularis incisura, which is close to the border between the body of the stomach and the antrum. Acid secretion is usually normal or decreased in patients suffering from type I gastric ulcers.

Type II
They are a combination of duodenal and stomach ulcers. Acid secretion is increased in these types of ulcers.

Type III
These ulcers are prepyloric. Acid secretion in type III ulcers could be normal or increased.

Type IV
Ulcers in this type are usually located near the gastroesophageal junction. The acid secreted is either normal or decreased in this type.

The preferred diagnostic test in the evaluation of suspected peptic ulcer patients is upper GI endoscopy. It is highly sensitive, helps in the detection of H. pylori infection, and aids in the differentiation between benign and malignant lesions through biopsies. 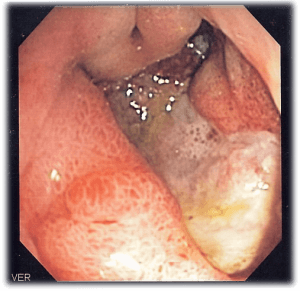 Chest radiographs are used to look for abdominal air to detect ulcer perforation.

Patients with massive GI bleeding, who cannot undergo endoscopy, may benefit from angiography, which helps in identifying the source of bleeding and providing the needed therapy.

Screening for Zollinger-Ellison syndrome is performed by a fasting serum gastrin level.

A biopsy is taken to examine for gastric cancer, which has a 70% accuracy.  The sensitivity increases to 99% when seven biopsy samples are obtained from the base and ulcer margins.

Slough and inflammatory debris cover the surface of the ulcer. Active granulation with fibrinoid necrosis and mononuclear leukocytic infiltration may be seen beneath the neutrophilic infiltration. The mucosa and submucosa are usually infiltrated by plasma cells, monocytes, and lymphocytes in chronic superficial gastritis.

The Management of Peptic Ulcers

The management of peptic ulcers differs depending on the clinical presentation, as well as the etiology of the condition.

In the emergency department, the presentations of gastritis and peptic ulcer disease are indistinguishable, which makes the management of them the same. Relieving the discomfort and promoting healing by the protection of the gastric mucosal barrier are the main treatment goals in the management of acute conditions. Acute interventions are usually not needed in peptic ulcer disease or gastritis.

H. pylori infections are treated with triple therapy including amoxicillin, clarithromycin, and a PPI for 7 to 14 days. In patients who are allergic to penicillin, amoxicillin is replaced with metronidazole. It is recommended to extend the duration of the treatment for more than 14 days in complicated cases of H. pylori infections.

It is advised to discontinue the use of NSAID in patients who are diagnosed with peptic ulcer disease.

A bleeding ulcer can be evaluated and managed by endoscopy, which reduces the likelihood of recurrent bleeding and decreases the need for surgical intervention.

The general pharmacologic principle of the medical management of acute bleeding from a peptic ulcer is acid suppression.