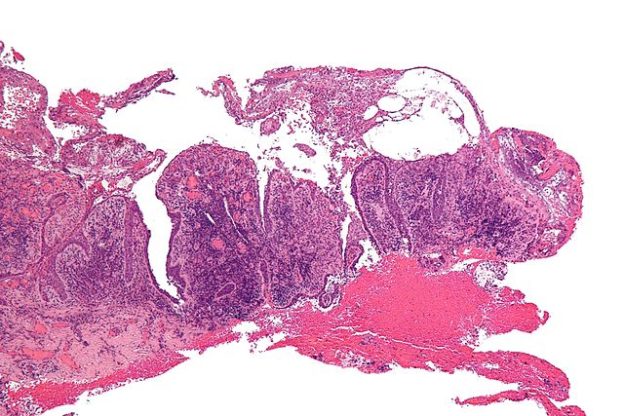 The word pemphigus comes from the Greek word “pemphix” which means blister or bubble. Pemphigus Vulgaris (PV) is an immunobullous intraepithelial disease characterized by vesicle formation on the skin and mucous membrane. Target antigens are the cell-cell adhesion molecules referred to as desmogleins.

Incidence and Prevalence: The frequency of occurrence of the pemphigus group of diseases is known to range from 0.05-2.7/100000/year. Among the different pemphigus diseases, PV is one of the most commonly seen form and its occurrence has some geographical variation. It is common in the US, Europe, and India.

Age: PV commonly occurs between the fourth and sixth decades of life. However, patients from Iran, North India, and Pakistan have shown a younger age of onset with a mean age of 40 years.

Sex: PV is known to affect men and women equally with a few studies showing a slightly higher predilection for females.

Ethnicity: PV is a disease which affects all ethnic groups, however, it is commonly seen in Ashkenazi Jews, Mediterranean, Iranian and Indian populations.

Always remember: Desmosomes act as the junction between two epidermal cells and hemidesmosomes connect basal keratinocytes to the basal lamina in the skin.

Target antigens against which the autoimmune antibodies are produced are:

Desmogleins belong to the cadherin family of cell-cell adhesion molecules and are part of the desmosome. Antigen proteins Dsg 1 and Dsg 3 are expressed differently on the skin and mucous membranes. In the skin, Dsg 1 is found throughout the epidermis while Dsg 3 is found in the basal and suprabasal layers. In the oral mucosa, Dsg 3 is mainly expressed with a low expression of Dsg 1. Dsg 1 and Dsg3 have to act synergistically in the skin and mucosa to maintain their stability.

In PV, there is a predominance of antibodies against Dsg 3 and therefore marked blistering of mucosal epithelium.

The main class of antibodies found in tissue biopsies of PV patients is IgG. IgM, IgA and IgE antibodies have also been found but are less common in these patients.

Acantholysis is the process of separating keratinocytes from one another as observed in PV.

Mechanisms which have been described for acantholysis are a steric hindrance by desmoglein antibodies, protease activation and disruption of intracellular signaling pathways and apoptolysis (apoptosis and acantholysis).

Anti Dsg antibodies have been demonstrated in healthy relatives of PV patients suggesting genetic control over the immune mechanism. PV has strong associations with HLA DRB1*04, *14 alleles, DQB1*0503 and *0302.

Drug-induced cases of PV are rare and mainly occur with the use of drugs containing thiol compounds such as penicillamine. Non-thiol drugs linked to the disease include ACE inhibitors, glibenclamide, and drugs with phenol groups such as cephalosporins, rifampicin, pyritinol, phenobarbital and aspirin.

Mucosal lesions: Mucosal lesions are present in almost all patients of PV. The initial clinical presentation is the presence of oral mucosal lesions, in 50-70% of PV patients. These lesions may be the only manifestation or may precede the cutaneous lesions. The most commonly observed lesions are irregularly shaped buccal or palatal erosions that heal slowly. Mucosal membranes involved are oral mucosa, conjunctiva, nasopharynx, larynx, esophagus, vulva, and cervix.

Cutaneous lesions: Flaccid blisters filled with clear fluid are the most common cutaneous lesions in PV. The skin covering the face, scalp, neck, upper chest and back is the most commonly affected. The skin around the blister may be normal or erythematous. The blisters may rupture leaving behind painful erosions which extend at the edges. Erosions usually heal leaving behind post-inflammatory pigmentation (hypopigmentation or hyperpigmentation) without scarring.

Nikolsky`s sign was first described by a Russian dermatologist Pyotr Vasilievich Nikolskiy. Nikolsky`s sign can be demonstrated by the application of a firm sliding pressure on the affected skin (i.e. where the blister is present), perilesional skin (skin near the lesion) or the normal skin (skin away from the blister). A positive response is seen when the blister gets extended and/or removal of epidermis adjacent to blister or removal of epidermis on normal skin.

Direct Nikolsky’s sign: Erosion of normal-appearing skin on the application of pressure. This sign is 100% specific in detecting PV.

Wet Nikolsky’s sign: Application of sliding pressure creates erosion with a moist glistening skin at the base.

Dry Nikolsky’s sign: Application of sliding pressure creates erosion with a dry base.

False Nikolsky’s sign or Sheklakov’s sign: Application of sliding pressure creates erosion in sub-epidermal blistering disorders such as bullous pemphigoid. This sign is elicited in a ruptured blister with some of the skin of the deroofed blister remaining in the corners of the blister which gets pulled, thus extending the erosion. The erosion gets extended to the surrounding normal skin and heals rapidly.

Pseudo-Nikolsky’s sign: In this sign, the application of sliding pressure on the affected skin or on erythematous areas leads to erosion. Pseudo-Nikolsky’s sign is elicited in cases of toxic epidermal necrolysis (TEN), Stevens-Johnson syndrome, bullous ichthyosiform erythroderma and burns (few cases). In these cases, the epidermal cells undergo necrosis, hence leading to erosion.

Other Clinical Findings in Pemphigus Vulgaris

Nail dystrophies, acute paronychia, and subungual hematomas have been seen in PV.

Pemphigus vegetans: It is a rare variant of PV showing vegetating erosions in the flexural areas. This variant has two subtypes: one is the Neumann type which is severe and other is the Hallopeau type which is milder.

Tzanck smear: It is a side lab cytologic smear prepared by gently scraping the base of a deroofed blister. The tissue that is scraped out is smeared on a clean glass slide and kept in open air to dry. This slide is then stained with Giemsa stain. Typical changes following acantholysis are seen in this smear. The tzanck cell is the name given to the acantholytic cell of PV.

The smear, when examined under a light microscope, shows the tzanck cell. The tzanck cell is a rounded epidermal cell with a nucleus which is dysmorphic or hypertrophic and nucleoli which are hazy or absent. The cytoplasm is abundant and takes up basophilic staining. There is a tendency of the cytoplasm to get condensed at the periphery of the cell membrane leading to deep basophilic staining at the edges of the cell membrane (mourning edge) and a relatively empty area around the nucleus (perinuclear halo). This test is known to be 100 % sensitive and 43.5 % specific for PV.

Histopathology: A skin biopsy of the blister shows intercellular edema with loss of intercellular attachments as the earliest change. A characteristic row of tombstones appearance is seen on the floor of the blister where the basal cells, which remain attached to the basement membrane separate from one another. Blister cavities contain acantholytic cells.

Direct immunofluorescence (IF) test: In this test, skin or mucosal biopsy is taken from the perilesional skin and transported in Michel’s medium. The basic principle of direct IF test: antibodies are labeled with immunofluorescent dyes, which then bind as per their target antigen (tissue antibodies and complement) mainly IgG and complement protein 3 (C3). This is the most accurate way to diagnose mucosal pemphigus. The characteristic appearance under fluorescence microscope is a ‘fishnet’ pattern of IgG around the keratinocytes.

It has been observed that DIF can be done even on plucked hairs in PV patients. The pilar sheath epithelium of anagen hair shows similar findings under DIF as the skin; hence can be a more acceptable diagnostic test.

Indirect IF test: This test is done to detect circulating antibodies mainly IgG and IgA. For this test, a number of epithelial substrates are used such as the esophagus of a monkey, guinea pig, normal human skin and the lip and esophagus of a rabbit. The patient’s serum is put on these epithelial substrates in the first step and in the next step the same tissue substrate is covered with fluorescent dye-labeled antihuman IgG. Circulating antibodies are detected in 80 % of patients.

Systemic corticosteroids are the mainstay of therapy in combination with a steroid-sparing immunosuppressant.

Initial treatment: Prednisolone is started in doses of 0.5-1 mg/kg/day with steroid-sparing immunosuppressant and appropriate topical therapy. Steroid dose is titrated as per the clinical response.

For patients with aggressive and generalized disease: IV pulses of 1 mg methylprednisolone or 100 mg dexamethasone with IVIG, immunoabsorption, and plasmapheresis have been used with variable results.

Azathioprine: used in doses of 2—3 mg/kg/day with prednisolone was found to be effective in many studies.

Mycophenolate mofetil: in doses of 1—3 mg/day was found to be as effective as azathioprine with fewer side effects and longer remission.

Cyclophosphamide is an anti-B cell drug that has a number of side effects. Hence it is reserved for PV patients not responding to azathioprine and mycophenolate mofetil.

Rituximab is a monoclonal anti-CD 20 antibody which causes depletion of B lymphocytes. It can be combined with conventional steroid therapy with minimal side effects. Reactivation of viral hepatitis and increased risk of infections due to excessive immunosuppression needs to be taken care of.

Immunoadsorption and plasmapheresis: Plasmapheresis is the removal of circulating antibodies from the plasma and has shown limited benefits. Immunoadsorption involves selective removal of IgG and has shown to induce remission. However, simultaneous therapy with steroids and immunosuppressants needs to be administered so as to suppress rebound production of antibodies.

In a case of localized oral disease, potent topical steroids or intralesional steroids may reduce the requirement for systemic steroids.

Potassium permanganate and topical antiseptics to reduce the risk of skin infections.

Emollients on skin to reduce frictional stress on affected skin.

Progression and Prognosis of Pemphigus Vulgaris

The disease’ course in PV is chronic with average disease duration of 10 years. Early oral involvement is known to be an adverse prognostic factor. Patients with an early age of onset and Asian ancestry have shown a prolonged disease activity. The presence of Dsg 1 and Dsg 3 antibodies is associated with more active disease. PV is known to have a mortality rate of 5—15 %.