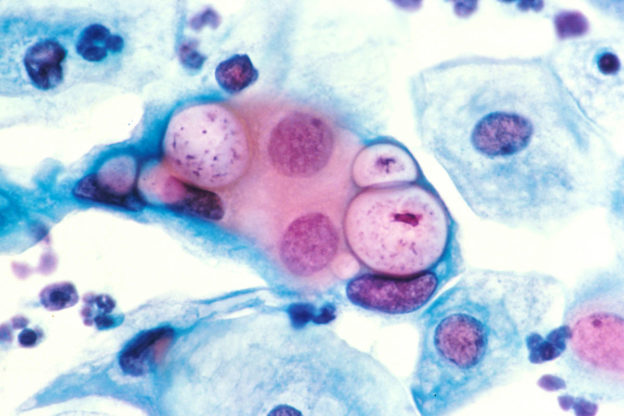 Pelvic inflammatory disease (PID) is defined as an infectious disease of the upper female reproductive system. This infection usually affects the uterus and fallopian tubes; in some patients, the ovaries may be involved. PID is closely linked to sexually transmitted diseases. The most commonly implicated organisms are Chlamydia trachomatis, Neisseria gonorrhoeae, and Gardnerella vaginalis.

Pelvic inflammatory disease (PID) is a common condition that affects approximately 2.5 million women every year in the United States alone. Up to 150,000 patients are hospitalized annually because of PID. This infection occurs in 40% of women who develop endocervicitis from untreated infections caused by Neisseria gonorrhoeae or Chlamydia trachomatis.

PID is more common in women in their reproductive years, particularly those in their twenties who are menstruating and have multiple sexual partners.

Pelvic inflammatory disease is an infection of the female reproductive system. Chlamydia trachomatis and Neisseria gonorrhoeae are the two most commonly identified causative organisms of PID.
Approximately 20% of women who have not been treated for chlamydial and gonorrheal infections will develop PID. 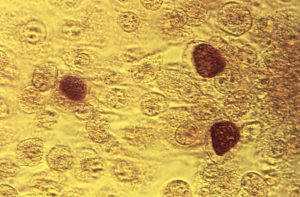 While the etiology is usually a sexually transmitted disease, polymicrobial organisms and anaerobes are commonly identified in cultures in addition to the causative organisms. Viral infections including those caused by herpes simplex virus-2 and cytomegalovirus can complicate the prognosis of PID.

Several risk factors have been linked to PID. Multiple sexual partners and a previous history of sexually transmitted infections are the most common risk factors, followed by a history of invasive gynecological procedures including endometrial biopsies. The use of intrauterine devices for contraception has been linked to a 9-fold increase in the risk of developing PID. The microorganisms associated with intrauterine device-related PID are anaerobes and not chlamydia- or gonorrhea-causing bacteria.

PID occurs in two subsequent steps. At first, the patient develops an asymptomatic sexually transmitted infection, usually chlamydia. Next, the mucosal barrier of the cervix is disrupted either due to the menstrual cycle, use of oral contraceptive pills, or changes induced by the ongoing infection.

The bacterial infection then spreads to the upper genital tract and involves the uterus, fallopian tubes, and adjacent structures, which may result in inflammation. Patients are symptomatic at this stage. 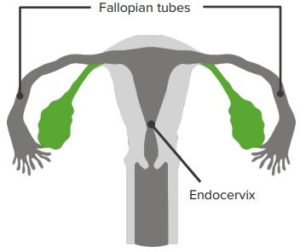 Having multiple sexual partners puts patients at a higher risk of contracting sexually transmitted diseases. Sexual intercourse and uterine orgasmic contractions facilitate the ascent of the offending organism into the upper genital tract and can contribute to the development of PID.

Lastly, certain genetic polymorphisms, especially in the toll-like receptors, have been associated with an increased risk of PID due to altered immunity against chlamydial infections.

Symptomatic patients usually present with fever, nausea, vomiting, and pelvic and abdominal pain. Several signs that point to PID can be used in diagnosis; these include abdominal pain in young women with a history of multiple sexual partners, a recent sexually transmitted infection, or the use of an intrauterine device for contraception.

Patients usually present during menstruation, which is another clue indicating PID as a likely cause of abdominal pain.

Pelvic pain is exacerbated by sexual intercourse, motion, or exercise. PID, if untreated, can lead to intraabdominal abscess formation or infertility; hence, the threshold to diagnose PID should be low. Accordingly, patients presenting with the above complaints should undergo an abdominal and pelvic examination for the assessment of the following three symptoms:

The threshold to diagnose PID should be low to avoid possible complications; however, several diagnostic workup studies have been evaluated to improve the certainty of diagnosis.

Laparoscopy to confirm PID is not indicated, but helpful when the diagnosis is inconclusive. Routine diagnosis, however, should be based on clinical, laboratory, and imaging studies, and not on laparoscopic evaluation alone.

The presence of fever, pain in the lower abdomen, vaginal discharge, and a high erythrocyte sedimentation rate is usually adequate to diagnose PID although other criteria may be used to increase the certainty of diagnosis.

Laboratory investigations are mandatory to exclude other differential diagnoses and confirm PID. The presence of more than 10 white blood cells per high-power field confirmed by microscopic examination of the vaginal discharge is a useful diagnostic criterion for PID. Additionally, culture studies or the detection of chlamydia or gonorrhea DNA can be helpful in increasing certainty. 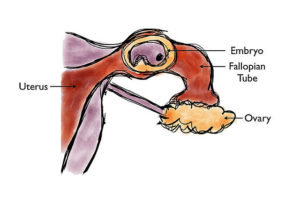 Image: “This is a diagram of an ectopic pregnancy showing the fetus in the fallopian tube.” by Takatakatakumi – Own work. License: CC BY-SA 3.0

Leukocytosis is seen in about 50% of patients but is not a necessary criterion for the diagnosis of PID since erythrocyte sedimentation rate or c-reactive protein levels are expected to be high in inflammatory conditions.

When clinical and laboratory results are inconclusive, transvaginal ultrasonography is indicated. This procedure reveals thickened fallopian tubes, free pelvic fluid, and indistinct endometrial borders in PID. Ultrasonography is also helpful to exclude conditions such as abscesses or ectopic pregnancies.

A computerized tomography (CT) scan of the abdomen and pelvis is indicated in patients presenting with severe pain to exclude possible complications such as intraabdominal abscesses.

Magnetic resonance imaging (MRI) is rarely used to diagnose PID; however, if used, the increased thickness of the hydrosalpinx and fallopian wall will be seen.

In addition to symptomatic treatment, the bacterial infection responsible for PID should be targetted with the goal of avoiding long-term complications of PID such as chronic pelvic pain, increased risk of ectopic pregnancy, and infertility.

A low threshold to diagnose and commence treatment for PID is essential to avoid complications. Current treatment regimens include antibiotics and possible surgical intervention with or without reproductive conservation.

Empiric antibiotic treatment should cover chlamydia and gonorrhea, as well as anaerobes, gram-negative organisms, and streptococci.

Patients with PID can be treated as outpatients or inpatients depending on the severity of their conditions. For outpatient treatment, two possible combinations of antibiotics are used. Ceftriaxone, doxycycline, and metronidazole are known as regimen A, while cefoxitin, doxycycline, and metronidazole constitute regimen B; both combinations are effective in the eradication of the infection in PID.

Inpatient treatment consists of starting patients on intravenous cefoxitin and doxycycline for 24 hours after the first clinical improvement and switching to oral doxycycline twice a day for two weeks. Patients with an established diagnosis of abscess benefit from metronidazole or clindamycin, as anaerobes are more likely to be implicated.

Antibiotic treatment is effective in up to 75% of cases. Surgical treatment for PID includes simple drainage of pelvic and fallopian-tube fluid, abscess drainage, adhesiolysis in the case of adhesions, and saline irrigation of pelvic organs. These procedures can be performed using laparoscopy, which can also confirm the diagnosis of PID. The removal of intrauterine contraceptive devices is not necessary if the patient develops PID. Surgical intervention is needed in approximately 20% of all cases.