Image: “Grades 1 to 5 Vesico-ureteric reflux shown on right of each diagram progressing from left to right. A normal kidney is shown on the left of each diagram.” By ColnKurtz. License: CC BY-SA 4.0

VUR affects 1—2% children; however, the exact percentage is unknown because many children remain asymptomatic and the disease resolves by itself. Children with recurrent UTIs have a much higher percentage of VUR (15—70%, depending on age).

VUR is usually congenital and is often familial, but it can also be secondary to various disorders of the urinary bladder. The risk of VUR is 25—33% if a sibling has VUR and 66% if a parent has VUR. Children with genetically linked VUR tend to have more serious reflux with scarring.

Normally, ureter enters the urinary bladder through the muscular hiatus of detrusor, passes through a submucosal tunnel, and opens into the bladder lumen (the opening is called the ureteral orifice). During micturition, the bladder and the surrounding muscles contract which compresses the intravesical ureter, thereby preventing any reflux of urine. However, for some reason, if the valve-like mechanism at the ureteral orifice is incompetent or deficient or if the submucosal tunnel is not long enough (ratio of tunnel length to ureteral diameter < 5:1), reflux of the urine ensues.

It is unclear what exactly causes renal damage (leading to the complication of scarring) in patients with VUR. It may be the reflux alone (i.e., sterile reflux), but there’s evidence for implicating ascending infection and pyelonephritis. Scarring may sometimes result from just a single episode of pyelonephritis, although the reason for such scarring is unclear and could be due to low superoxide dismutase levels in kidneys of the children. There is certainly a correlation between the frequency of UTIs and the development and severity of VUR.

Often, scarring is concentrated at the renal poles, where most backflow of urine into the collecting ducts (known as intrarenal reflux) occurs. Intrarenal reflux facilitates the transport of bacteria to the renal tubes. Pyelonephritis is an inflammatory state in which mediators of inflammation, such as superoxide, are released and cause tissue ischemia and fibrosis.

VUR may not be symptomatic in itself, but it predisposes the patient to urinary tract infections (UTIs) as bacteria can be transported to the upper urinary tract from the bladder. The resulting pyelonephritis may even lead to reflux nephropathy. Children often therefore present with signs and symptoms of UTI (fever, vomiting, diarrhea, anorexia, lethargy, abdominal pain, etc.).

Children with a recurrent UTI may have a failure to thrive. Pyelonephritis manifests as abdominal pain or discomfort and the typical sign of flank pain with tenderness may be absent in the pediatric population. Reflux nephropathy, especially in advanced stages, can present with headaches, signs, and symptoms of congestive heart failure, and/or signs and symptoms of uremia due to renal failure.

Some children, however, may have hydronephrosis (often detected prenatally), without any overt clinical features.

UTI is diagnosed by urinalysis and culture. A urine sample can be obtained via suprapubic aspiration (ideal but rarely practiced), catheterization (for younger children), or mid-stream catch (for older toilet-trained children). In 2011, the American Academy of Pediatrics specified that a diagnosis of UTI should be established using both a urinalysis (showing pyuria) and a culture (growing more than 50,000 CFU/mL).

Renal function tests may be performed to obtain a baseline value, which can help in the monitoring during treatment.

Because clinical signs and symptoms are non-specific, imaging is the mainstay of the diagnosis of VUR.

Important: Although ultrasonography of the urinary tract is helpful in the detection of a dilated ureter, it may not detect early grades of VUR; hence, contrast voiding cystourethrography and radionuclide cystogram are best techniques for imaging the lower and upper urinary tract, respectively. VUR that occurs during bladder filling is called “low-pressure VUR”, while VUR that occurs during voiding of the bladder is called “high-pressure VUR”.

Ideally, all children with febrile UTI should undergo imaging for VUR. 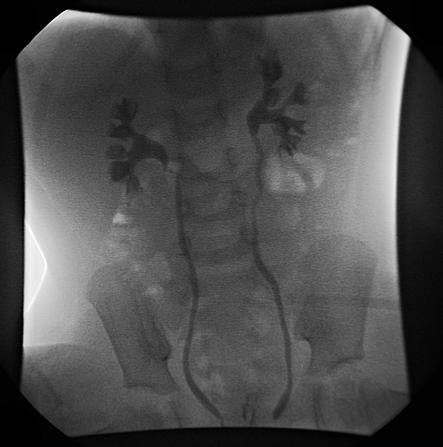 The severity of VUR is graded based on the urinary tract’s appearance on a contrast voiding cystourethrogram, as per the International Reflux Study Classification. The grades are as follows:

Indirect cystography, which includes imaging of the lower urinary tract after injection of an intravenous radiopharmacological substance, can detect 75% of VUR and avoids the need for catheterization.

After confirmation of the diagnosis, the monitoring of the child’s height, weight and blood pressure is necessary. If renal scarring is detected, serum creatinine should also be measured.

Treatment of VUR in children can be medical or surgical, and the choice varies from case to case. VUR usually resolves over time, so sometimes observation with or without antimicrobial cover is enough. In some cases, however, renal injury or other complications may occur due to VUR, and surgical correction of VUR (also known as antireflux surgery) is performed to avoid them.

Observation includes behavioral modification – ensuring timed/regular urine outputs and bowel movements, increased intake of fluids, monitoring for UTIs and prompt treatment should it be suspected, etc. Antibiotic prophylaxis (amoxicillin in infants less than 8 weeks, trimethoprim-sulfamethoxazole, nitrofurantoin, penicillin in older children) is administered to some children, particularly those with grade III or IV reflux. Antibiotics are supposed to decrease reflux-associated UTI and decrease the risk of development of new renal scars. Typically, one-fourth of the therapeutic dose is administered as prophylaxis.

Open, laparoscopic, and robot-assisted laparoscopic VUR correction involves adjustment of the abnormal UVJ, primarily aiming to achieve the intramural ureter length: ureteral diameter ratio of 5:1. In cases of megaureter, the diameter of the ureter must also be adjusted. The success rate of the procedure is over 95%, and discharge is possible within 1–2 days. For Grade V VUR, the success rate is relatively lower – 80%.

Endoscopic VUR correction involves a suburethral injection of a biodegradable material, dextranomer microspheres suspended in hyaluronic acid (Deflux), just below the ureteral orifice. (Other bulking agents include polytetrafluoroethylene and polyacrylate polyalcohol copolymer, but their use is limited at present, especially in the US.) The injection creates an artificial flap and provides compensatory artificial compression of the ureter.

Performed under general anesthesia, endoscopic VUR repair is a quick outpatient procedure, with almost zero recovery time. Success rates are relatively low (70—80%), and repeat injections might be required in some cases.

In 2012, the American Urological Association released treatment guidelines for pediatric VUR. The summary of these guidelines are as follows [Moradi & Diamond]:

Children < 1 year of age without renal scarring at diagnosis: For all grades, start with observation and antibiotic prophylaxis; continue if no complications.

Children < 1 year of age with renal scarring at diagnosis: For grades I—IV, start with observation and antibiotic prophylaxis; continue if no complications. For grade V, surgical correction as the initial step is an alternative.

Children > 1 year of age without renal scarring at diagnosis: For grades I—IV, start with observation and antibiotic prophylaxis; continue if no complications. For grade V, surgical correction as the initial step is an alternative.

Children > 1 year of age with renal scarring at diagnosis: For grades I—II, start with observation and antibiotic prophylaxis; continue if no complications. For grades III–IV, surgical correction as the initial step is an alternative. For grade V, surgery is preferred.