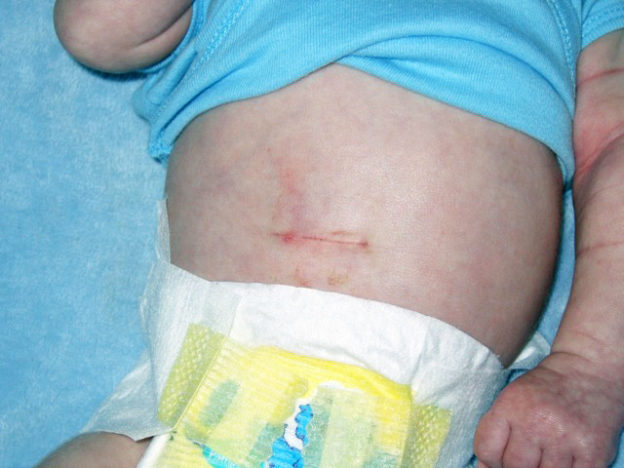 Infantile hypertrophic pyloric stenosis (IHPS) is a condition caused by a hypertrophy and hyperplasia of the muscularis propria of the pylorus in infants. The pylorus defines a muscle that opens and closes to allow food to pass through the stomach into the intestine. This hypertrophy/hyperplasia results eventually in gastric outlet obstruction. 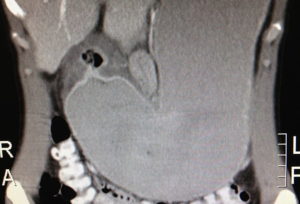 Pediatric pyloric stenosis is a relatively common disorder in the United States with an estimated incidence of up to 4 per 1,000 live births. Fortunately, the condition is not associated with significant mortality.

Most of the patients are diagnosed at the age of 3 weeks. By 18 weeks, almost all patients with pyloric stenosis would have already presented to the health care system.

The etiology of IHPS seems to be both genetic and environmental. For instance, exposure to bottle-feeding and macrolide antibiotics has been reported to increase the risk. Additionally, infants who have abnormal mesenteric plexus innervation or deficiency of nitric oxide synthase are at risk of developing IHPS.

Unclear etiology but an association with:

Hypertrophy and hyperplasia of two layers of the pylorus “circular and longitudinal” lead to the development of symptoms. This eventually leads to obstruction of the gastric outlet causing abdominal distension and if left untreated gastric dilatation. 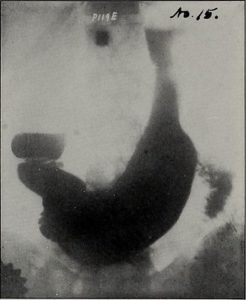 The causes of pyloric stenosis are unknown, but environmental and genetic factors might play a role. IHPS usually is not present at birth and probably develops afterward. Several mechanisms and hypotheses have been suggested to explain why hypertrophy/hyperplasia of the pylorus occur in the first place:

Nitric oxide plays a vital role as a neurotransmitter in the gastrointestinal tract, where it relaxes sphincters by causing smooth muscle relaxation. Patients with nitric oxide synthase deficiency have an increased tone of the lower esophageal sphincter causing achalasia, increased tone of the pylorus causing pyloric stenosis and impaired gastric motility which can lead to gastroparesis.

There is no single gene that can be directly linked to pediatric pyloric stenosis but familial aggregation is usually evident in most of the cases.

Since the level of the obstruction is at the gastric outlet, patients typically show non-bilious vomiting which can be projectile. After vomiting, infants are hungry again. Despite increased feeding, the infant will show poor weight gain due to repeated vomiting almost after each feeding.

This presentation is usually evident at 3 weeks of age. If an adequate fluid replacement is not attempted, the infant can develop dehydration and lethargy.

Physical examination can reveal an olive-like, non-tender mass in the upper right abdomen. Additionally, when gastric obstruction is almost-complete, gastric peristaltic waves can be visible before vomiting. Fortunately, the diagnosis nowadays can be achieved early enough, and these classical symptoms are no longer common.

Due to repeated vomiting, patients with IHPS can become dehydrated. Serum electrolytes, blood-urea-nitrogen, creatinine and blood pH should be checked.

Patients with repeated vomiting due to IHPS lose large amounts of acid. This eventually leads to metabolic alkalosis. Loss of fluid also leads to contraction of the extracellular fluid, so the kidneys compensate by activation of the renin-angiotensin system activation. Increased angiotensin II and aldosterone leads to increased potassium secretion (hypokalemia), and further hydrogen secretion and HCO3- reabsorption (more alkalosis). This metabolic process is called contraction alkalosis.

When dehydration is more severe, patients can develop hypernatremia, which can have deleterious effects on the brain. Even though these laboratory findings are helpful in the diagnosis of IHPS, they are becoming less common today due to the advances in imaging studies.

Patients with repeated vomiting after each meal, who are between 3 to 12 weeks of age, and have an olive-like mass on abdominal examination do not need any further studies, and the diagnosis of IHPS can be made clinically. When the clinical presentation is less typical, i.e. repeated vomiting without an olive-like mass, ultrasonography is the best imaging modality to aid in the diagnosis. 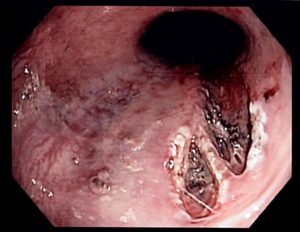 Upper gastrointestinal barium studies should be reserved for patients with non-conclusive ultrasonography, and is not routinely used in the evaluation of IHPS. The “double track sign” is defined as the appearance of two thin barium lines between the hypertrophic layers of the pylorus and can be found in both pyloric stenosis and pylorospasm.

Upper gastrointestinal endoscopy is a last resort in the diagnostic work-up of pyloric stenosis. It can help exclude possible complications such as Mallory-Weiss tears due to repeated vomiting and confirm the diagnosis of pyloric stenosis by direct visualization of the gastric antrum and the pylorus.

It is important to evaluate infants for signs of dehydration and to assess the degree of fluid loss. Infants who are in shock due to severe fluid loss should undergo fluid replacement therapy according to the pediatric advanced life support guideline.

Accordingly, correction of electrolytes imbalances, restoration of the normal acid-base balance and replacement of fluid is essential at the emergency level.

The first step in the emergency management of an infant with IHPS is to infuse a bolus of 20 mL/kg of a crystalloid solution to correct dehydration.

Infants who are not dehydrated should receive 2 times their maintenance fluid replacement, which should contain either a 5% dextrose or a 0.33% sodium chloride solution depending on whether the patient is hyponatremic or hypernatremic at presentation to treat metabolic alkalosis. Patients with pyloric stenosis also develop hypokalemia and they should receive up to 4 mEq KCL per 100 ml fluid.

Once the infant is hemodynamically stable, the treatment for pyloric stenosis is corrective surgery. The currently recommended procedure is a Ramstedt pyloromyotomy in which the pylorus and antrum are excised while the muscle layer is left intact. This procedure can also be done laparoscopically.

Laparoscopic pyloromyotomy has been found to be safe and as effective as the open approach but with lower morbidity, smaller skin incisions, and faster recovery.

Infants who are poor surgical candidates might benefit from medical treatment. Medical treatment consists of nasogastric administration of atropine which is believed to result in relaxation of the pylorus muscles and eventually relieve the obstruction after 21 days of daily administration. Atropine administration was evaluated so far in a single study that included only 12 patients and generalization or recommendations cannot be made yet until larger, well-controlled clinical trials can be made.

In patients with delayed or missed diagnosis, there is a risk of dehydration leading to shock. The prognosis for such cases with early diagnosis is good with laparoscopic pyloromyotomy.

Is pyloric stenosis in adults possible?

Pyloric stenosis is possible in adults but mostly as a result of other conditions such as ulcers, cancer or abdominal surgery. At times it can be idiopathic although a very rare occurrence but it could occur in middle-aged men.