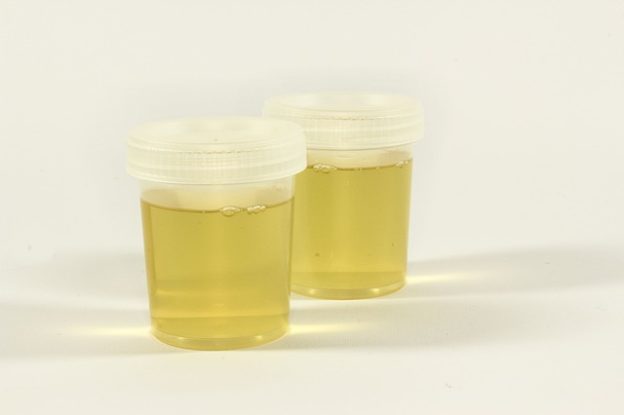 Definition of Proteinuria in Children

Proteinuria can be defined as the excretion of protein in urine at levels > 100 mg/m2/day or > 4 mg/m2/hr. Other definitions are listed in the table below.

Orthostatic proteinuria is a benign condition and not kidney disease. It is a condition characterized by urine protein levels > 1000 mg in a 24-hour urine collection.

Epidemiology of Proteinuria in Children

Etiology of Proteinuria in Children

Benign proteinuria can be classified as follows:

Glomerular proteinuria can occur in the following conditions:

Acute tubular necrosis (ATN) is the most common cause of tubular proteinuria and can occur due to hypovolemic shocks. ATN can also be caused by drugs such as NSAIDs, aminoglycosides, amphotericin, and lithium. Tubular proteinuria is also seen in the following conditions:

Overflow proteinuria is seen in the following conditions:

Pathophysiology of Proteinuria in Children

Normally, proteins with molecular weight < 25,000 Da cannot cross the glomerular basement membrane (GBM). Since the GBM is negatively charged owing to the presence of heparan sulfate proteoglycans, it repels anionic proteins such as albumin. The majority of LMW proteins that undergo glomerular filtration are reabsorbed by the proximal tubule. Proteinuria occurs when any of these mechanisms are disrupted.

Proteinuria can cause damage to the glomerular epithelium leading to podocyte loss and production of chemokines and cytokines that can cause an inflammatory response. Albumin is filtered in the proximal tubules, which can process up to 250 g of albumin/day; therefore, any disruption in this process may result in nephrotic syndrome.

Overflow proteinuria occurs where proteins cannot be effectively reabsorbed by the proximal tubule due to the overproduction of proteins.

The possible mechanisms that explain orthostatic proteinuria include renal hemodynamic changes associated with postural change, partial renal vein occlusion, increased glomerular capillary wall permeability, and the role of circulating immune complexes. In renal diseases with persistent proteinuria, proteinuria itself can be responsible for injury to the renal tubular cells and lead to fibrosis and sclerosis, possibly via the generation of reactive oxygen species.

Symptoms of Proteinuria in Children

Proteinuria is mostly asymptomatic and can be detected during routine urinalysis or diagnostic evaluation. Transient proteinuria is accompanied by a fever [temperature > 38.3°C (101 °F)] and dehydration,. It can occur after stress or heart failure, or following exercise, seizure, or exposure to cold weather. Dipstick test shows 2+ or lower proteinuria, which resolves after the resolution of the causative condition. Sometimes, exercise-induced proteinuria may last for as long as 48 hours following exercise. 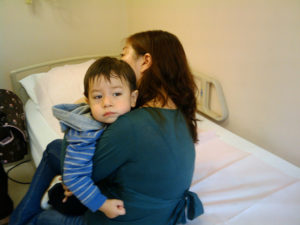 In orthostatic proteinuria, increased protein excretion (up to 1000 mg/day) is seen in an upright position, while protein excretion is normal when in the supine position. The child does not exhibit hypertension, edema, hematuria, hypoalbuminemia, or renal dysfunction. This condition is seen in tall and thin young adults < 30 years of age. Children with isolated proteinuria are otherwise healthy and asymptomatic with normal blood pressure and functional parameters. Proteinuria is usually < 2 g/day.

When proteinuria occurs due to a specific disease, the symptoms of the disease are the presenting symptoms in the child. Nephrotic syndrome is characterized by nephrotic range proteinuria, hypoalbuminemia, hyperlipidemia, and edema.

The child may present with the following symptoms:

IgA nephropathy (Henoch-Schönlein purpura or HSP) is characterized by episodes of macroscopic hematuria, proteinuria, abdominal or flank pain, and fever within 72 hours of a respiratory infection. Additionally, purpuric lesions, especially over the buttocks and lower extremities are observed, and the condition is accompanied by abdominal pain, edema, and arthralgia. Children with HUS may present with bloody diarrhea, vomiting, abdominal pain, anemia, and renal failure.

Diagnosis of Proteinuria in Children

Collection of 24-hour urine is a gold standard for urinary protein quantification; however, such collection is often impractical or not possible in children. A 24-hour urine protein level > 100–150 mg/m2/day is usually suggestive of proteinuria, although preterm infants and neonates may normally exhibit higher levels of excreted proteins. Urinary protein levels > 1000–2000 mg/day is usually considered pathological in children, except in those with orthostatic proteinuria.

For UPr/UCr determination, a freshly voided FMU specimen is usually preferred, although a random sample is also acceptable. As the ratio is dependent on urinary creatinine levels, the UPr/UCr ratio may be elevated in conditions with low creatinine excretion such as severe malnutrition or in children with low muscle mass. In conditions characterized by low glomerular filtration rates (GFRs), the interpretation of this ratio is difficult.

The urinary dipstick test is most commonly used for the preliminary detection of urinary protein. A reagent strip is processed within 60 seconds of immersion in freshly voided urine. Tetrabromophore, a chromatophore impregnated on the strip, changes color depending on the concentration of protein in the urine. The dipstick method is most sensitive to albumin and less sensitive to other proteins.

The dipstick test is a semiquantitative method and can be interpreted as follows:

False-positive results may be encountered due to alkaline urine (pH > 7.0), highly concentrated urine, the prolonged immersion of the dipstick in a urine sample, pyuria, macroscopic hematuria, presence of antiseptic agents (hydrogen peroxide, chlorhexidine, benzalkonium chloride) in the voided sample, and phenazopyridine therapy. Causes for false-negative results are very dilute urine (specific gravity < 1.005) or when the predominant protein in urine is not albumin.

Sulfosalicylic acid (SSA) turbidometric testing is not often used in the qualitative determination of proteinuria; however, this technique can detect albumin, immunoglobulins, and Bence-Jones proteins in urine. As acidification of urine causes the precipitation of urinary proteins, turbidity results when SSA reagent (three parts) is added to a freshly voided urine sample (one part). The degree of turbidity correlates with the protein levels in the urine, which can be compared to a reference scale to determine the protein concentration of the sample.

Renal ultrasonography is indicated in the case of glomerular disease to review the size and echogenicity of the kidneys.

Radiography of the chest may be indicated if cardiac and chest affections are suspected; a computed tomography (CT) scan is suggested if required.

Symptoms of Fanconi syndrome are as follows:

The initial evaluation of an asymptomatic child with persistent proteinuria should include an FMU sample for urinalysis and the determination of UPr/UCr. Dipstick negative or trace proteinuria, and UPr/UCr < 0.2 in the FMU sample for three consecutive days confirms the diagnosis of orthostatic proteinuria. For the collection of FMU, bladder emptying must be ensured before bedtime; the urine must be collected immediately upon waking up the following morning.

For children with persistent proteinuria, further laboratory evaluation is required to diagnose the underlying condition. These include a complete blood count (CBC) and renal function test, and the determination of serum electrolyte, serum albumin, and serum complement levels (C3, C4). Additional tests include the determination of streptococcal markers (anti-streptolysin O and anti-DNAase B titers), serum antinuclear antibody (ANA) levels, and serum cholesterol levels, as well as a chest X-ray (to determine signs of volume overload), and renal ultrasound (to diagnose renal structural abnormalities).

Indications for referral to a pediatric nephrologist include the following:

Differential Diagnoses of Proteinuria in Children

Therapy of Proteinuria in Children

For children with isolated proteinuria, an initial and thorough diagnostic evaluation, periodic monitoring of FMU and blood pressure, and referral to a pediatric nephrologist are recommended. Proteinuria-lowering strategies should be considered.

Treatment of persistent proteinuria is centered around the management of the underlying disease and drug therapy to reduce proteinuria.

Angiotensin-converting enzyme (ACE) inhibitors and angiotensin receptor blockers (ARBs) can reduce proteinuria. ACE inhibitors are helpful as a primary or adjunctive treatment in patients with high-grade or nephrotic-range proteinuria. These drugs are often started in children with diabetes mellitus at the onset of microalbuminuria. They have an additional advantage of lowering blood pressure in hypertensive patients due to vasodilation.

ARBs have similar effects but are more commonly used in adolescents owing to a lack of sufficient evidence in the pediatric population. The combination of ACE inhibitors and ARBs may have additional advantages.
Patients with a fluid overload can be managed using diuretics. Calcium channel antagonists help in reducing proteinuria.

Progression and Prognosis of Proteinuria in Children

Long-term prognosis in children with isolated proteinuria is good; however, ~20% can be at risk of progressive renal disease within the next 10 years.

Sodium and protein restriction is advised in patients with nephrotic syndrome and proteinuria.

Lunn A, Forbes TA. Haematuria and proteinuria in childhood. Pediatrics and Child Health 2016.